East African Community Headquarters, Arusha, Tanzania, 23rd October, 2019: The establishment of fully serviced industrial parks with plug and play facilties to attract investments is one of the proposed actions to gain quick wins in the promotion of the Cotton, Textiles and Apparels (CTA) Manufacturing Industries in East Africa.

The 1st Forum of Owners of Cotton, Textiles and Apparels (CTA) Manufacturing Industries was held in Kigali, Rwanda further proposed Sustainable procurement of all institutional uniforms, beddings, draperies by state institutions from textiles and fabric industries in the region.

Extra-Ordinary Meeting of the EAC Sectoral Council on Trade, Industry, Finance and Investment underway in Arusha 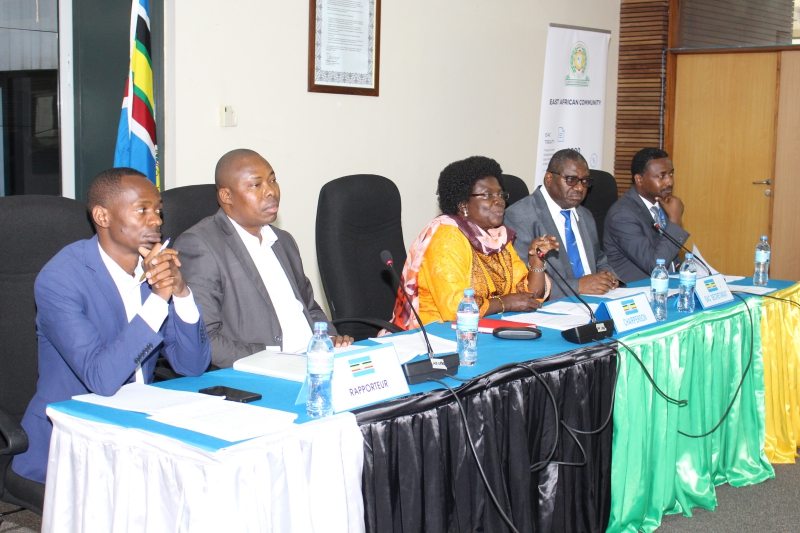 Addressing the meeting, Hon. Bazivamo hailed the initiatives taken by the above Foreign Partners to assist EAC in driving the process of promoting the establishment of an EAC Regional Automotive Industry Plant and an EAC Regional Vaccine and Pharmaceuticals Manufacturing Facility noting that local manufacture of products and improvement of the required infrastructure especially for the health sector have been given high priority in the 5th EAC Development Strategy and also as directives of the 19th EAC Heads of States Summit . He pointed out that the initiatives are beneficial and feed well to the already existing policies in the EAC including the 5th EAC Development Strategy, the Industrialization Strategy (2012-2012) and the EAC Regional Pharmaceutical Plan of Action (2017-2027). He urged the collaborating partners to urgently come up with an Implementation Framework and a pragmatic Roadmap for advancing the two initiatives.

On her part, Dr. Focken, the Cluster Coordinator-EAC-GIZ Programme in Arusha, thanked all the participants for active participation towards the proposals. She said fast tracked implementation of the two initiatives would achieve tangible results to the citizens of East Africa and demonstrate the benefits of regional integration.

Mr. Manuel Batz, Director Sales Middle East and Africa, informed the meeting that for instance, by 2020 GAVI support to vaccines in the region will be scaled down and the region needs to be prepared with locally manufactured vaccines. He pointed out that it is imperative for the region to build its capacity in manufacturing vaccines by developing business models that have worked in other regions of the world. He proposed the following as measures to fast track the development of vaccines manufacturing: strong government action including enacting of enabling policies; implementation of a regional public procurement scheme for vaccines; identification of a selected number of vaccines to be prioritized for development of a negotiated regional common agreement to develop the vaccine among other measures.

Mr. Thill Markus, President of Region Africa, Robert Bosch (Pty) Ltd, informed the meeting that despite the fact that the EAC market for passenger, light vehicle is currently small and fragmented accounting for 6% of Africa’s demand and 0.5 of global demand making it difficult to justify local manufacturing, a step change is possible if the region can create a single regional market and enact policies to encourage new vehicle demand, and drive trade deals to enable exports that could justify the development of a sizeable local manufacturing industry, similar to the Association of Southeast Asian Nations (ASEAN) and Morocco. He called on the region to make the right policies that would make the automotive manufacturing a major job creator and economic stimulator for the region, injecting over $840M in foreign direct investments per year and creating ~52,000 direct jobs in the first stage of major industry growth. He gave example of growth levers such as stimulating demand through trade policies, enabling consumer financing, encouraging supply through tax incentives and the creation of an auto-focused industrial zone that have worked in countries like Morocco.

In order to take forward the initiatives, the partners agreed on the establishment of a taskforce for each of the two initiatives that will detail out and evaluate the EAC Partner States opportunities and comparative advantage, as well as design a roadmap for action and begin investment attraction with specific potential investors. The ultimate goal of the process would be the establishment of regional vaccines/pharmaceuticals facility and a regional automotive plant that will privilege regional economies of scale and value/supply chains. 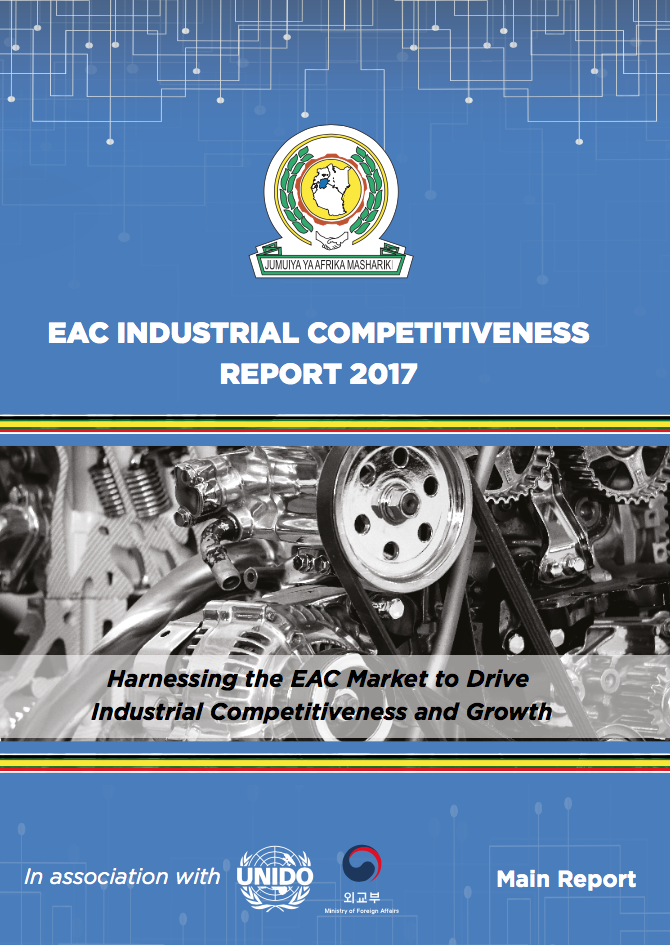 Themed ‘Harnessing the EAC Market to Drive Industrial Competitiveness and Growth,’ the report assesses EAC’s industrial performance vis-à-vis other regions and role models in Asia and Africa and sheds light on strategic short- and long-term industrialization paths that the EAC should pursue.

ICR 2017 provides a compass to policy-makers, the private sector (in particular manufacturing firms and associations), and a wide range of stakeholders on the broader direction of the industrial development trajectory of the EAC and of the internal competitiveness dynamics among Partner States.

Speaking at the event, Uganda’s Minister of State for EAC Affairs, Hon. Julius Muganda, said that Industrialization in the context of the EAC region will depend on how the region strategically leverages itself to maximize on the opportunities created by the Common Market Protocol as a stimulus for demand, while simultaneously capitalising on other emerging markets for manufacturers.

“The realisation of a fully functioning Common Market and the deepening of regional integration through a monetary union are crucial for providing the much-needed impetus for industrialisation in the region,” said Hon. Muganda, who represented the Chairperson of the EAC Council of Ministers, Hon. Kirunda Kivejinja, Uganda’s Deputy Prime Minister and Minister for EAC Affairs.

Hon. Muganda further emphasized on the need for leaders and technocrats to think of a collective regional strategy to respond to unemployment including expanding the manufacturing sector capacity and promoting micro, small and medium enterprises (MSMEs) and youth entrepreneurs.

In his remarks, the Director of Trade at the EAC Secretariat, Mr. Alhaj Rashid Kibowa, contribution of the manufacturing sector remains at paltry 10 percent, adding that the sector has been on a decline in the recent past.

“It is against this background and in recognition of the existing challenges that the region embarked on the programme “Strengthening Capacities for Industrial Formulation and Implementation in the East African Community,” said Alhaj Kibowa.

Alhaj Kibowa noted that the implementation of the programme had enhanced the region’s capacity for industrial policy design, monitoring and evaluation, culminating into the development of the ICR 2017.

“Consistent with the EAC Industrialization Policy and Strategy, the ICR 2017 has enhanced the region’s capacity to: design, manage and implement an industrial policy and collect industrial statistics and data. Further to this, it has strengthened the institutional capacity of the EAC Secretariat, Governments of all EAC Partner States and key private sector stakeholders,” said Alhaj Kibowa.

Also present at the launch of the report was South Korean Ambassador to the United Republic of Tanzania, H.E. Geum-Young Song who reaffirmed his country’s commitment to continue supporting the EAC in realizing its goal of industrialization.

Dr. Stephen Kargbo, UNIDO representative to Tanzania, Mauritius and EAC speaking at the ICR 2017 launch expressed hope that the EAC would use the findings of the report to revitalize the industrial sector in East Africa.

“While we conclude successfully the implementation of the current regional project, we are also exploring with our main counterpart, the EAC Secretariat, options for a phase II that would ensure produced diagnostics translate into concrete industrial policy processes, instruments and action plans creating significant positive impact for the industrial development in the region,” said Dr. Kargbo.

He also assured stakeholders that whereas UNIDO will continue to play its role, supporting relevant institutions in capacity building activities for strengthening industrial policy making capacities, it was the responsibility of Partner States’ governments and other stakeholders to transform the initiative into meaningful strategies for the attainment of sustainable and inclusive economic development in EAC.

Closing the one-day event, the EAC Deputy Secretary General in charge of Planning and Infrastructure, Eng. Steven Mlote, said that East Africa was on the way to becoming a regional hub for manufacturing and a gateway to investment in Africa.

“To be successful in this venture, our industrial policies should seek to promote structural changes,” said Eng. Mlote.

Implementation of phase two of the project will switch from diagnostics to industrial policy processes and instruments. This means that the focus will be on the establishing a regional industrial intelligence and policy advisory support, enhancing capacity for competitiveness analysis of the Industrial sector, putting in place a regional competitiveness framework to facilitate benchmarking and establishing an e-Industrial information Resource Centre.

The EAC Secretariat in collaboration with UNIDO is implementing a programme on “Strengthening Capacities for Industrial Policy Formulation and Implementation in the East African Community” which was approved by the Sectoral Council on Trade, Industry, Finance and Investment during its meeting held on 22nd May, 2015.

Through the Programme, specific trainings have been delivered at both national and regional levels to create, among other things, capacity for industrial competitiveness analysis as envisaged in the EAC industrialization policy and Strategy. As a result, the programme has greatly contributed to enhancement of capacity for industrial policy, analysis, design, monitoring and evaluation at Partner States and the Secretariat levels.

To ensure sustainability and full use of knowledge acquired in the trainings, the Secretariat in collaboration with UNIDO and a team of experts from Partner States took the initiative of preparing the EAC Industrial Competitiveness Report, 2017 (ICR-2017).