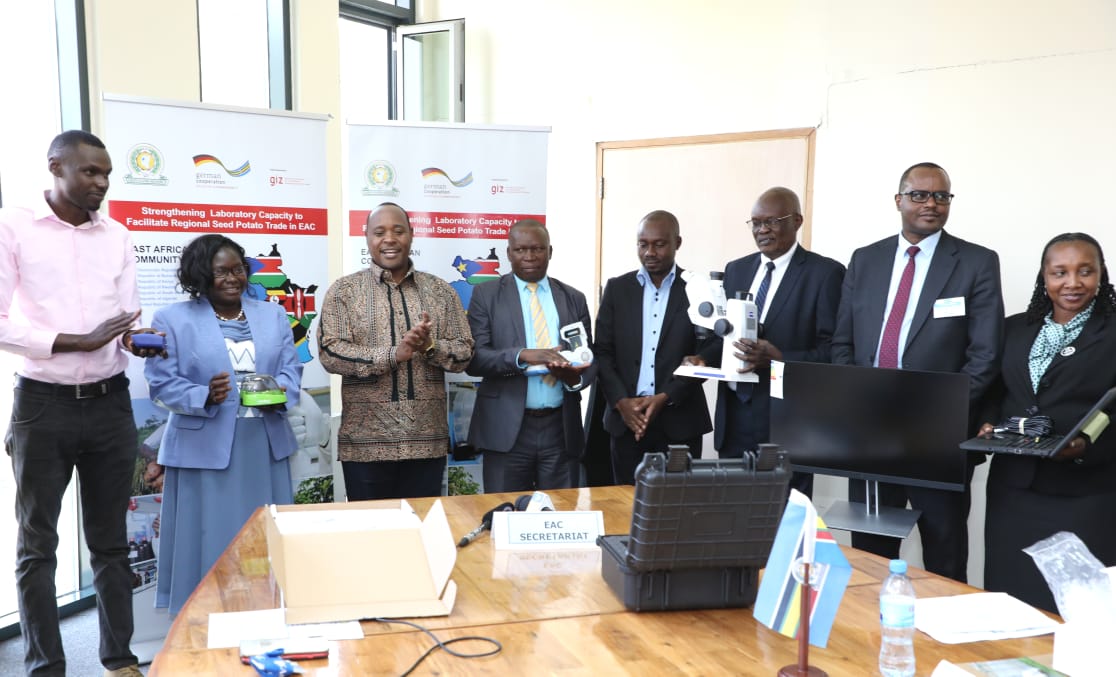 The meeting started on Monday, 21st March 2022, with the Session of Senior Officials which will end on Wednesday, 23rd March, 2022. The Coordination Committee or the Session of Permanent/Principal/Under Secretaries is slated for Thursday, 24th March, 2022 and the Ministerial session on Friday, 25th March, 2022. 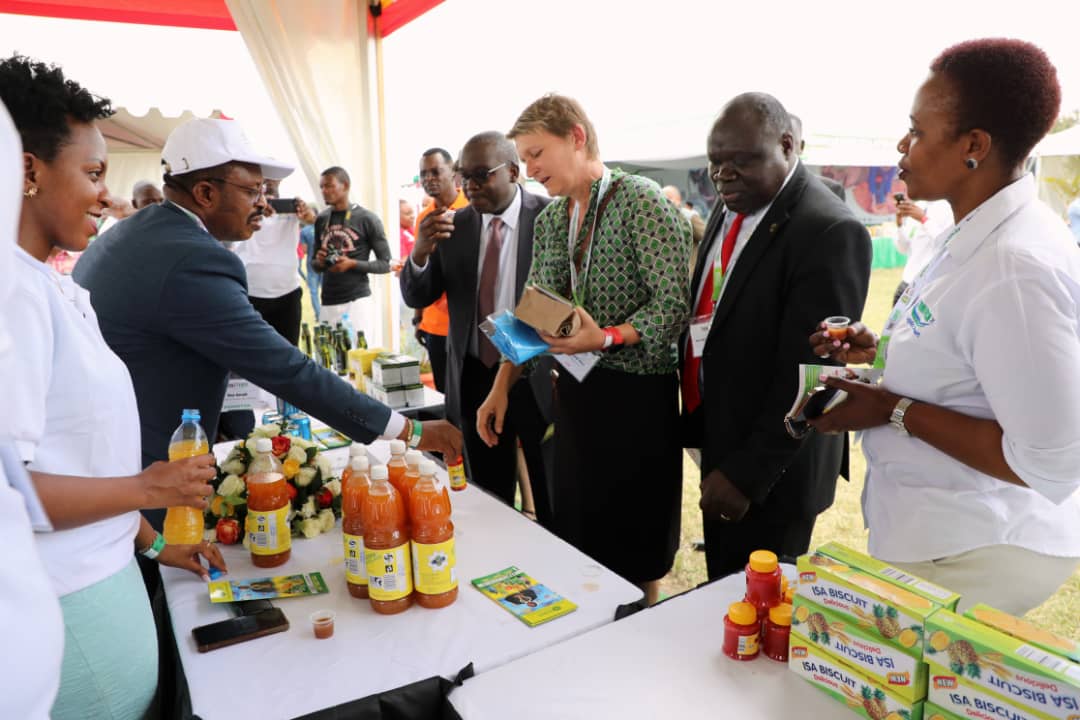 The EAC Deputy Secretary General in charge of the Productive and Social Sectors, Hon. Christophe Bazivamo, said that Partner States could reverse this situation through deployment of better storage and processing technologies and enhanced packaging techniques can greatly contribute to the regional development objectives; ensure food security and result in higher earnings for farmers and SMEs. 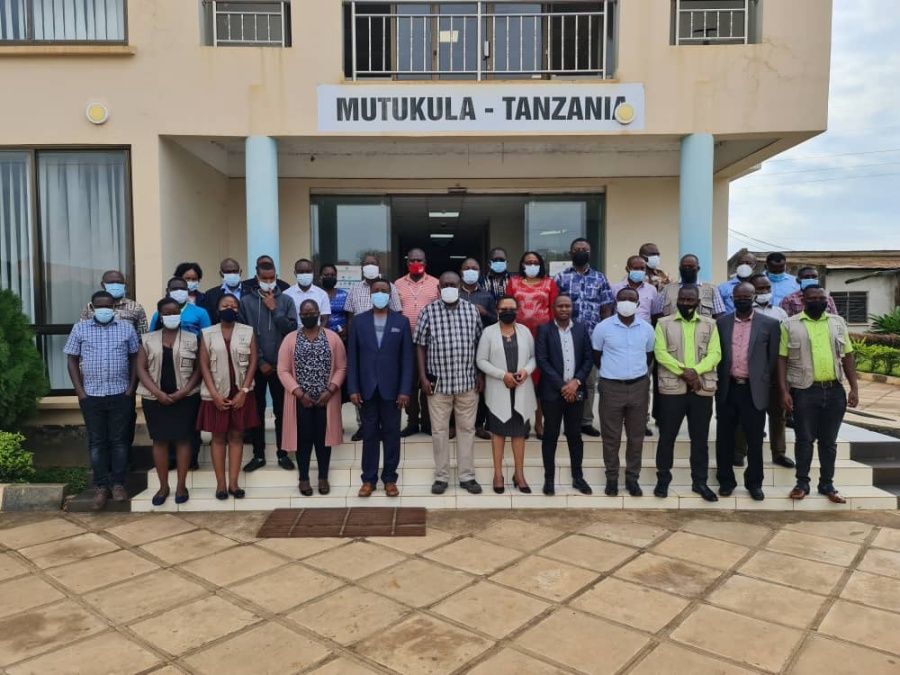 The five capacity building workshops conducted at the OSBPs of Namanga (Kenya/Tanzania), Malaba (Kenya/Uganda), Kabanga-Kobero (Tanzania/Burundi), Rusumo (Tanzania/Rwanda) and Mutukula (Tanzania/Uganda) were aimed at creating awareness amongst plant health inspectors on the Standard Operating Procedures (SOPs) for inspecting maize, beans and rice for pests of phytosanitary importance in the EAC. 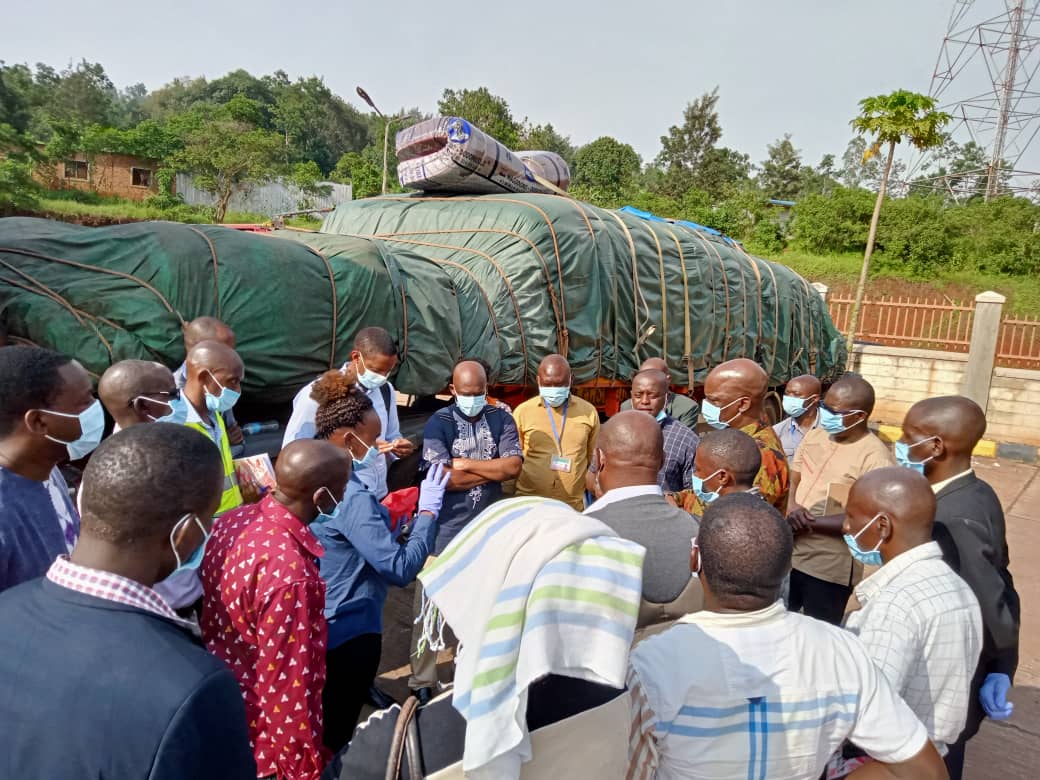 The SOPs were developed to operationalize the Pest Risk Analysis (PRAs) for maize, beans and rice that are the most widely traded in the region. 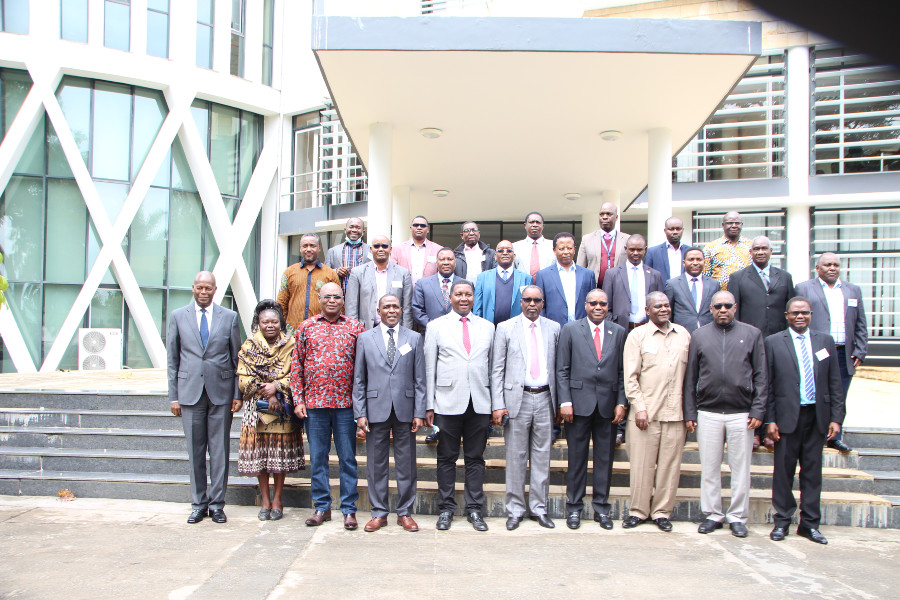 East African Community Secretariat; Arusha, Tanzania; 22nd June, 2021: The 14th meeting of the EAC Sectoral Council of MinisterS on Agriculture and Food Security is currenly ongoing at the EAC Headquarters in Arusha, Tanzania and through hybrid means.

The five-day meeting kicked off with the Session of Senior Officials on Monday, 21st June, 2021 and will run up to 23rd June, 2021 followed by the Coordination Committee Session which comprises Permanent/Principal Secretaries of Agriculture from the EAC Partner States on Thursday, 24th June, 2021. The Session of Ministers/Cabinet Secretaries has been scheduled for Friday, 25th June, 2021. 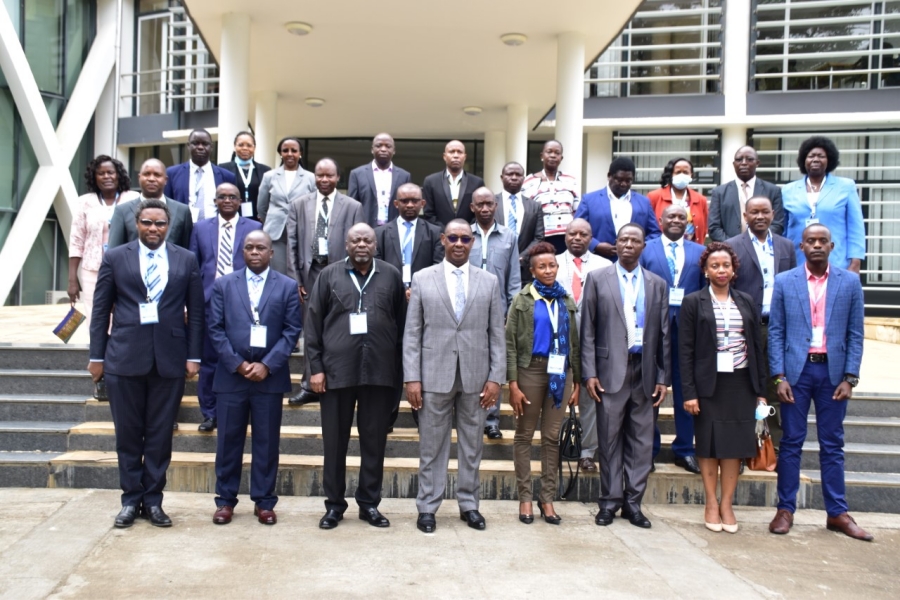 In a speech read on his behalf by the EAC Director General Customs and Trade, Mr. Kenneth Bagamuhunda at the launch of the project in Arusha, EAC Secretary General Hon. Dr. Peter Mathuki, said that the True Fish project was designed to address or remove impediments to growth in aquaculture faced by investors, for instance, lack of technical skilled operators, lack of investment finance and business planning and incomplete networks.

“The second objective of the TrueFish project is to address identified threats which could undermine the sustainability of aquaculture development, or could impact negatively on the environment, food security or livelihoods especially biosecurity risks such as fish diseases and introduction of non-native species that has led to the loss of biodiversity,” said Dr. Mathuki.

The Secretary General singled out some of the challenges facing the fishing industry on Lake Victoria as steadily declining stocks of Nile perch and tilapia, fish diseases, uncontrolled proliferation of fish farms and rising water levels.

On his part, LVFO Executive Secretary Prof. Shigalla Mahongo, disclosed that the European Union Commission was financing the project under the 11th European Development Fund (EDF) Regional Indicative Programme to the tune of 10,150,000 Euros.

Prof. Mahongo said that despite various efforts of the countries around Lake Victoria to ensure sustainability of the traditional fishing methods, demand for fish had increased considerably due to increased population, increased incomes and urbanization.

“Whilst human population in the LVFO Partner States was only 23.5 million in 1954, a reference period when Nile perch was introduced in Lake Victoria, the human population grew seven times by 2018 to 165.5 million. Therefore, the capture fisheries of Nile perch and tilapia are no longer able to satisfy the ever-increasing demand for fish in the region,” said Prof. Mahongo.

The Executive Secretary said that despite global aquaculture production surpassing harvests from capture fisheries for the first time in 2014, fish farming in the EAC region was still at its infant stage, accounting for approximately only 7-8% of fish consumption.

Speaking at the event, Mr. Jose Parajua, a Fisheries Technical Adviser at the Food and Agriculture Organization (FAO) described the negative impact of the introduction of the Nile perch species on Lake Victoria almost six decades ago.

“Obviously, the entire food web in the lake underwent all kinds of changes due to the voracious Nile perch. Many small and colourful fish species disappeared from the lake forever. The Nile tilapia that was also introduced a few decades earlier wiped out some original other tilapia species,” said Mr. Parajua.

“In that dynamic interaction between nature and fisheries LVFO had to make decisions how to assure food security for the riparian populations while at the same time looking after the economic interests of the neighbouring countries through the continuous export of the largest money-maker, the earlier-mentioned Nile perch,” said the FAO expert, adding that the LVFO had done much to address the challenges.

“The LVFO could not stop the influx of numerous additional fishers, fishmongers, fish traders and other fisheries professionals and the overexploitation of the perch became a fact. Also, the Nile tilapia was hit hard by the fishing intensity, but nature came up with a solution as there was suddenly much space for a small fish species, also known as dagaa in Tanzania, mukène in Uganda and omèna in Kenya,” he said.

Mr. Parajua said that Nile perch was very important for the food and nutrition security of the people residing around and far from the lake.

“The dried form of this fish found its way to Burundi, DR Congo, South Sudan and beyond. As the quantities fished were enormous, this species found its way into poultry feed producers and eventually also into fish feed,” he said.

“There was the continuous demand for fish from the lake. If the fisheries could not supply the fish then fish had to be reared outside the lake. Many entrepreneurs started fish farms for Nile tilapia and the African catfish. The climatic conditions in the region are very conducive for fish culture in fishponds, but the region needed more fish,” said Mr. Parajua, adding that this was the genesis of cage farming on the lake.

“Why not grow the fish inside the lake, in floating cages? Once this idea was born and the results appeared encouraging, the numbers of cages started mushrooming. Small square cages initially with volumes of a few cubic metres, followed by larger circular ones, which could contain tens of thousands of fish each,” added the FAO expert.

Mr. Parajua said that the development of cage farming could easily have gone out of hand and that is why it became imperative for LVFO to prepare guidelines for cage culture development and management.

“However, the concerns were too many. Questions were raised about the possible pollution of the lake if leftover fish feed entered the lake. What about fish excrements? Where should the farms be located so that conflicts with capture fisheries could be avoided, particularly in the light of spawning and nursery grounds of other fish species?” he said.

The TRUEFISH project has three major components whose implementation is rather complex as it involves several partners:

Component 1 is on BUSINESS (i.e. improved access to commercial networks). The contracting authority for Component 1 is the EAC but working closely with LVFO.

Component 2 is on SKILLS i.e. availability and quality of local skilled workers in aquaculture-related businesses:

Expected Result: Strengthened commercial networks for competitive aquaculture- related businesses. This component will be implemented by Landell Mills International, which is a Consultancy Firm.

Component 2 will be implemented by the FAO.

Third Expected Result: Improved protection of biodiversity. This will be implemented by WorldFish Centre (Formerly ICLARM). East African Community Headquarters, Arusha, Tanzania, 7 October, 2020: While October to December is normally considered an important rainfall season for Burundi, Kenya, Rwanda, Tanzania and Uganda, this time round a drier than normal season is expected in most parts of the EAC region. Only western Uganda and the border area with South Sudan might see higher than normal rainfall according to the Greater Horn of Africa Climate Outlook Forum that brings together the national meteorological and hydrological experts in the region. The Deputy Secretary General in charge of Productive and Social Sectors in the EAC Secretariat, Hon. Christophe Bazivamo, urges the Partner States to take appropriate measures in time to mitigate possible threats to the citizens related to the expected high temperatures.

East African Community Headquarters, Arusha, Tanzania, 25th  September, 2020: On September 22nd, the EAC Secretariat, together with the Alliance for a Green Revolution in Africa (AGRA), the Africa Union Development Agency (AUDA-NEPAD) and Regional Strategic Analysis and Knowledge Support System (ReSAKSS) successfully convened its Second High-level Forum which disseminated to stakeholders the 2nd Biennial Review report on the implementation of the June 2014 AU Heads of State and Government Malabo Declaration on Accelerated Agricultural Growth and Transformation for shared prosperity and Improved Livelihoods.

Under the leadership of the African Union Commission (AUC) and the NEPAD Planning and Coordination Agency (NPCA), the Inaugural Biennial Review report was launched in January 2018 during the AU General Assembly, and the EAC was the first Regional Economic Community to convene a high-level forum to discuss outcomes of the Inaugural Biennial Review report. This tremendous achievement is in line with efforts aimed at increasing awareness and advocacy momentum behind the CAADP Agenda for increased political, policy and financial commitment.