Uganda hosts 3 institutions of the Community: the East African Development Bank (EADB) charged with promoting sustainable socio-economic development in East Africa by providing development finance, support and advisory services; the Civil Aviation Safety and Security Oversight Agency (CASSOA), which aims at making air transport services safe, efficient and profitable through the adoption of common policies for the development of civil air transport in the region; and the Inter-University Council for East Africa (IUCEA) that coordinates inter-university cooperation in East Africa.

Uganda is a landlocked country lying astride the equator. It is bordered (clockwise from north) by Sudan, Kenya, United Republic of Tanzania, Rwanda and the Democratic Republic of Congo.

The official languages are English and Kiswahili; Kiswahili and Luganda are widely spoken and there are several other African languages.

Religious festivals whose dates vary from year to year include Good Friday, Easter Monday, Eid al-Fitr (End of Ramadan) and Eid al-Adha (Feast of the Sacrifice).

The railway network extends over some 260 km. At the end of 1993, passenger services between Kampala and Kenya were resumed after a break of 15 years.

Uganda is a member of the African, Caribbean and Pacific Group of States, African Union, Common Market for Eastern and Southern Africa, The Commonwealth, Non-Aligned Movement, Organisation of Islamic Cooperation, United Nations and World Trade Organization. Uganda is also a member of the Intergovernmental Authority on Development, which was established in 1986 by the six countries in the Horn of Africa to combat drought and desertification and promote food security in the region.

Water, with swampland, covers nearly 20% of the surface area. The largest lakes include Lake George, Lake Kyoga, and parts of Lakes Victoria, Albert and Edward. From its source in Lake Victoria, the White Nile flows northwards through the country. Mountains include the high Rwenzori range in the west (Margherita Peak on Mount Stanley is 5,110 metres) and Mount Elgon (4,253 metres) in the east. The country is popularly known as the ‘the Pearl of Africa’.

Equatorial, tempered with breezes and showers. Cooler in the higher areas. Heavy rain from March to May, and in October and November; little rainfall in the north-east.

The most significant issues are: draining of wetlands for agricultural use; overgrazing, soil erosion and deforestation; water hyacinth infestation in Lake Victoria; and poaching.

Much of the country, being so well-watered, is richly fertile; there is arid semi-desert in the north-east. Most of the country’s vegetation is savannah with tropical forests in areas of high rainfall. Drought-resistant bush, grasses and succulents grow in the north-east. Forest covers 14% of the land area, having declined at 2.3% p.a. 1990-2010. Arable land comprises 35% and permanent cropland 11% of the total land area.

Uganda has 7,200 sq. km of national parks and game reserves, reflecting the extraordinary diversity of the country which comprises lakes, swamps, dense grassland, woodland, rolling plains, forests and mountains, there is a rich variety of wildlife. 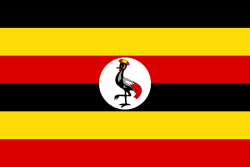 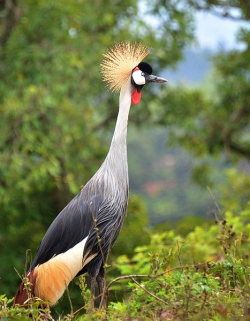