In 2008, the Government of Rwanda decided to change the medium of education from French to English.

In September 2008, Rwanda became the first nation in the world to elect a majority of women MPs: 45 of the 80 members of the Chamber of Deputies. The number increased to 51 women deputies in the September 2013 election.

The Country hosts the East African Science and Technology Commission (EASTC), an institution of the Community with the objective of promoting and coordinating of the development, management and application of science and technology in the Partner States.

Kinyarwanda, English and French are the official languages, and Kiswahili is widely spoken.

Religious festivals whose dates vary from year to year include Good Friday and Eid al-Fitr (End of Ramadan, two days).

There is no railway.

The terrain is rugged with steep hills and deep valleys, rising in the north to the highest peak, Karisimbi (4,519 metres), which lies in a range of volcanoes. The country is popularly known as the ‘land of a thousand hills’.

Though the country is close to the Equator, the climate is tempered by altitude; it is hot and humid in the valleys, and drier and cooler in the higher elevations. The rainy seasons are March-May and October-November; the hottest season being August-September.

The most significant environmental issues are drought, limiting the potential for agriculture; overgrazing; soil erosion and degradation; and deforestation due to almost universal use of wood as a fuel.

National parks and game reserves cover some 8% of the country and include the Volcanoes National Park (famous for its mountain gorillas) and Akagera National Park (elephants, buffaloes, giraffes and zebras). 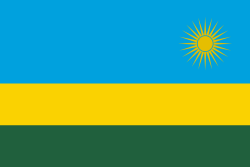 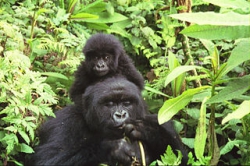