The country includes the highest and lowest points in Africa - the summit of Mt Kilimanjaro (5,895 metres above sea level) and the floor of Lake Tanganyika (358 metres below sea level).

The United Republic of Tanzania borders the Indian Ocean to the east, and has land borders with eight countries: (anti-clockwise from the north) Kenya, Uganda, Rwanda, Burundi, the Democratic Republic of Congo (across Lake Tanganyika), Zambia, Malawi and Mozambique. The country includes Zanzibar (consisting of the main island Unguja, plus Pemba and other smaller islands)

Kiswahili and English are the official languages.

There are 3 international airports (Dar es Salaam, Kilimanjaro and Zanzibar) and more than 50 local airports and airstrips. Because of the size of the country and scattered population, air services have become the most significant form of internal transport for official and business travel.

The country comprises several distinct zones: a fertile coastal belt; the Masai Steppe and mountain ranges to the north (with Mt Kilimanjaro rising to 5,895 metres); and a high plateau in the central and southern regions. There are over 61,000 sq. km of inland water. Unguja Island (36 km from the mainland) is fertile, hilly and densely populated on the west side, low and thinly peopled in the east.

Varies with geographical zones: tropical on the coast, where it is hot and humid (rainy season March-May); semi- temperate in the mountains (with the short rains in November-December and the long rains in February-May); and drier in the plateau region with considerable seasonal variations in temperature.

The most significant environmental issues are drought, soil degradation, deforestation, desertification and destruction of coral reefs.

Lush tropical at the coast; the rest of the country, apart from urban areas, is savannah and bush. Forest and woodland cover 37% of the land area, having declined at 1.1% p.a. 1990-2010. Arable land comprises 16% and permanent cropland 2% of the total land area.

The national parks and game reserves cover 16% of the country and include Serengeti National Park (famous for its vast migratory herds of plains animals, notably wildebeest, zebras, elands and kudus). Small bands of chimpanzees are found in the Gombe National Park along Lake Tanganyika. The steep mountain walls of Ngorogoro Park’s volcanic crater have provided protection and a natural enclosure for animals in an environment of great natural beauty. 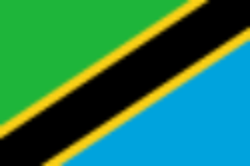