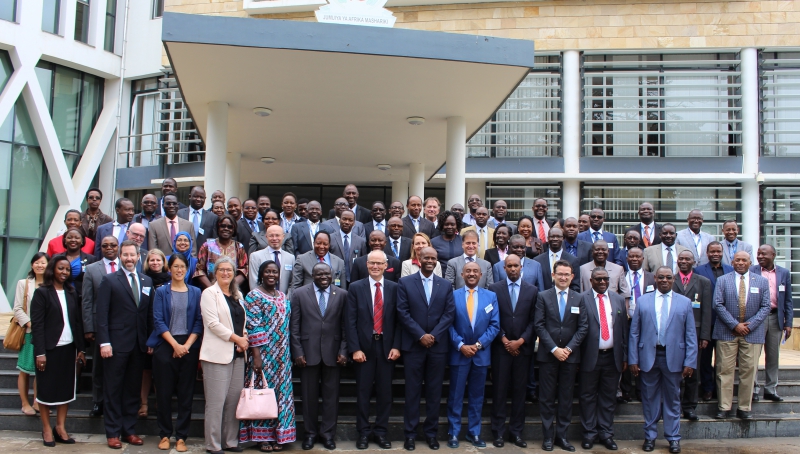 The EAC called the forum purposely to share with Development Partners the 5th EAC Development Strategy and priorities for the Financial Year 2018/2019.

Speaking when he officially opened the forum, EAC Secretary General Amb. Liberat Mfumukeko said that the EAC had significantly strengthened its financial systems and procedures.

Amb. Mfumukeko disclosed that the Community had largely attained most of its objectives under the 4th Development Strategy, its implementation had suffered from inadequate financial resources.

The SG said that despite the challenges, the Community had registered a number of achievements including the establishment of an interim Projects Coordination Unit to improve the management of donor-funded projects in the EAC.

The SG further said that the EAC had already recruited a Fund Manager for the Partnership Fund who has since reported for work, adding that this would enhance the management of the Fund and increase its efficiency.

“The Partnership Fund is a very special vehicle for EAC in terms of coordinating Development Partner support. It has continuously played a pivotal and catalytic role in supporting activities geared towards accelerating the Community’s agenda since its inception 10 years ago,” he said.

The 5th Development Strategy has seven key Priority Areas including: the consolidation of the Single Customs Territory to cover all imports and intra-EAC traded goods, particularly agricultural and other widely consumed products; infrastructure development; enhancing free movement of all factors of production as envisaged in the Common Market Protocol, and; enhancement of regional industrial development.

On the upcoming presidential election in the Republic of Kenya, Amb. Mfumukeko urged the Kenyan electorate to uphold the country’s pride as a regional leader by conducting their election peacefully on 26th October, 2017.

In his remarks, Danish Ambassador to Tanzania and the EAC Einar Jensen said that Partner States would eventually take full control of funding the Community and urged them to remit their contributions to the EAC in time.

Amb. Jensen, who is also the Chair of the Partnership Fund, observed that funding levels to the EAC had been on the decline over the years, adding that this was not healthy for the Community’s financial situation.

“There is need for immediate intervention to address this situation. The Development Partners remain optimistic that together with steady, persistent effort, with strong principled commitments and hope, we will resist the challenges and emerge as stronger and truly collaborative partners,” said the Danish envoy.

Amb. Jensen said that misalignment between the EAC Medium Term Expenditure Framework and activities/projects approved by the donors have increasingly posed challenges in implementation of annual work plans, including notorious delays in approving the annual plans,” he said, adding that this has at times led to poor performance and a series of negative impacts.

He said that the potential of EAC as a region lay in the possibility of making it a truly single market, free from barriers, unnecessary tariffs, mutual understanding, predictable business environment in addition to peace and stability.

“It is out of such space the Partner States will do business and grow businesses, and create value and companies that will last and that will help to build a great future for the region. The Development Partners are determined to be that partner to accelerate the next era of East African growth for all East Africans,” said Amb. Jensen.

“The EAC is expected to be a real stimulant of growth and enrichment of the EAC people. We would like to see the EAC as a booming, growing, thriving market, where we can do business and where you have a young population that is surging. We are your partners in making this a reality,” he added. 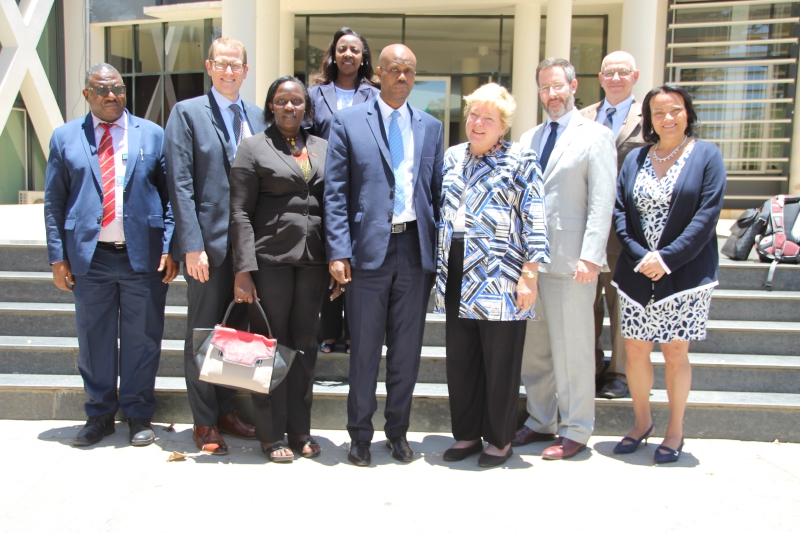 EAC Secretary General Amb. Liberat Mfumukeko (right) with Ms. Karen Freeman, the Mission Director of USAID-KEA. The two discussed issues of mutual interest between the EAC and the United States of America. 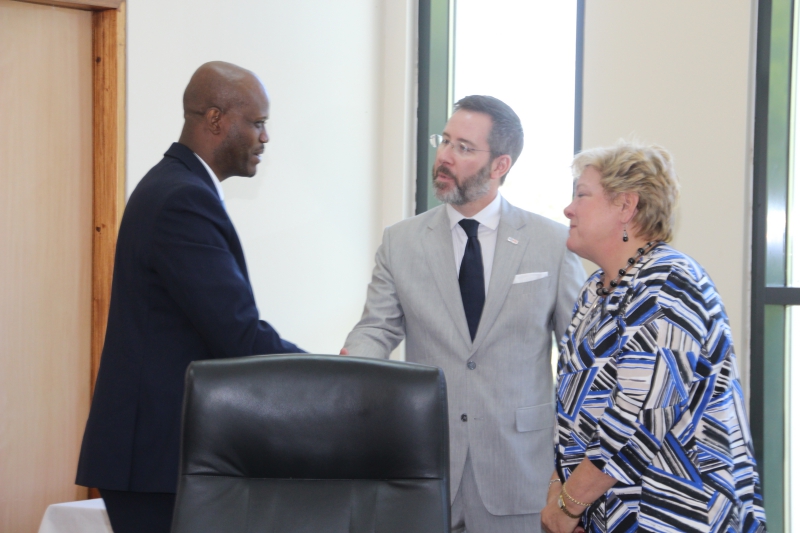 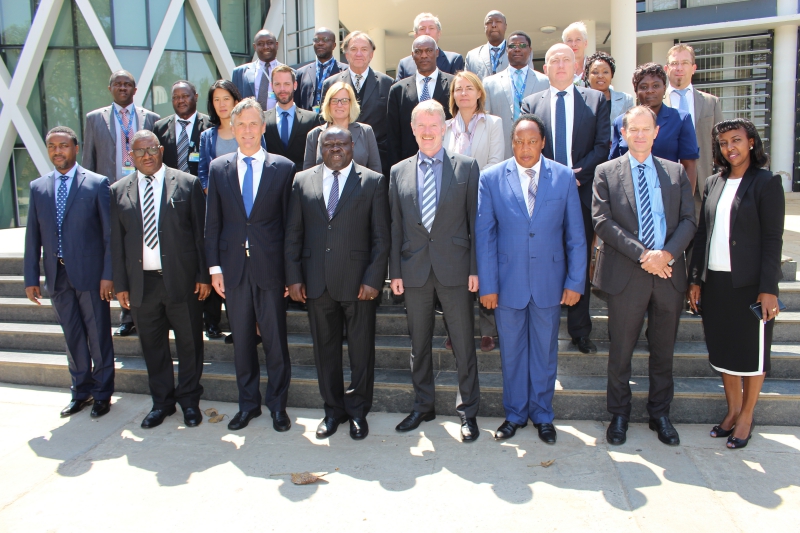 The Federal Republic of Germany will continue providing technical and financial support to the East African Community Partner.

The two priority areas for German support to the EAC are regional economic integration and health with German support since 1998 adding up to 285 million euros.

The Deputy Head of the East Africa Division of the Federal Ministry of Economic Cooperation and Development, Mr. Georg Rademacher, disclosed that in the last two years alone, Germany has committed 60 million euros for the procurement of life-saving vaccines for children in the EAC.

“These commitments were all done on top of the 67 million euros pledged during government negotiations in 2015,” he said.

He emphasised the importance of incorporating the private sector, civil society and other stakeholders in EAC activities, adding that they are key drivers for effective implementation and deeper integration.

In his remarks, Hon. Christophe Bazivamo, the EAC Secretary General in charge of Productive and Social Sectors, noted that the EAC-German Cooperation 2019-2022 comes against the backdrop of positive economic performance in the region that was realized under the 4th EAC Development Strategy 2012-2017.

Hon. Bazivamo said cooperation between the EAC and Germany had resulted in notable achievements in health and pharmaceutical sectors; trade and customs; promotion of gender and education; monetary harmonization; institutional capacity strengthening and support to the Partnership Fund.

Germany’s Ambassador to the EAC, Dr. Dieter Waechter, said the cooperation between Germany and the EAC goes back a long way, adding that it had strengthened bilateral relations in addition to enabling the EAC make major milestones in the integration process.

A one-day meeting between the East African Community (EAC) Secretariat and the United States Agency for Development (USAID) on the operationalization of the five-year Regional Development Objectives Grant Agreement (RDOAG) kicked off at the EAC Headquarters in Arusha, Tanzania today.

USAID granted EAC US$194 million under the RDOAG which was launched in November last year, monies that will be spent on shared development goals over the next five years.

Speaking during the opening session of the meeting, USAID Deputy Mission Director for Kenya and East Africa, Ms. Candace Buzzard, said the RDOAG provides for: changes in the way USAID will do its business; strengthen USAID-EAC Partnership; stronger collaboration, coordination and communication, and; institutional strengthening.

Ms. Buzzard said USAID will coordinate more closely with the EAC to ensure better delivery of project goals. In his remarks, EAC Secretary General Amb. Libérat Mfumukeko noted that USAID’s gesture had sent a strong signal of its desire to support the Community attain its goals.

Amb. Mfumukeko said the USAID contribution would enable the Community to achieve many things. Out of the US$194 million, about US$30 million will finance institutional strengthening within the EAC Secretariat while the remainder will support other development partners in their efforts to contribute to the EAC regional integration agenda.

Among the sectors to be funded under the RDOAG include health, environment and natural resources, climate change, trade, security of populations and energy.

A High Level Dialogue between the officials of the East African Community and the Development Partners concluded on 6th December 2016, in Dar es salaam, Tanzania, with the Development Partners commending the Secretary General of the East African Community, Amb. Liberat Mfumukeko for his outstanding work and commitment in enhancing efficiency of EAC processes and procedures through introduction of reforms.

At the dialogue, held at the official residence of the Norwegian Ambassador to United Republic of Tanzania, H.E. Hanne-Marie Kaarstad, the Development Partners expressed renewed confidence in EAC with UK, Canada, France and Turkey committing to resume contributions to the EAC through the Partnership Fund in the next financial year.

Prior to the dialogue, the Secretary General met and held discussions with H.E. Hanne-Marie Kaarstad, the Norwegian Ambassador, who is also the Chair of the Partnership Fund High Level Committee. Their discussions revolved around the future of the Partnership Fund including the succession of the Partnership Fund Chairmanship and recruitment of a dedicated Manager for the Fund. She expressed her appreciation for the outstanding work the Secretary General had exhibited since he took over the leadership of the Community. H.E. Hanne-Marie has been the Chair of the Committee for the last 3 years and will be completing her term on 31st December 2016.

On the same day, the Secretary General held a series of meetings with several Development Partners in Dar es Salaam, Tanzania, to update them on the regional integration agenda and discuss possibilities of further collaboration.

The Secretary General met H.E. Yasemin Eralp, the Turkish Ambassador to the United Republic of Tanzania. During the meeting, the Secretary General urged the Turkish government to consider identifying areas of potential cooperation with EAC. The Turkish Ambassador on her part expressed her Government’s interest to contribute to the Partnership Fund, and collaborate with EAC in areas of Trade, Investment, and Agriculture.

The Secretary General, Amb. Liberat Mfumukeko met the Ambassador of the People’s Republic of China to Tanzania, H.E. Dr. Lu Youqing. During the meeting, the Secretary General appreciated the contribution by the Chinese Government to the ongoing Inter-Burundi Dialogue. He acknowledged receipt of US$ 200,000 in the EAC Secretariat’s accounts as support to the Office of the Facilitator of the Inter-Burundi Dialogue. The Chinese Ambassador reiterated his Government’s commitment to supporting EAC in the investment, Industry and Environment and Wildlife Conservation. The People’s Republic of China also expressed interest to enter into a unilateral Free Trade Area Agreement with EAC and it was ready to commence discussions with the EAC towards this end.