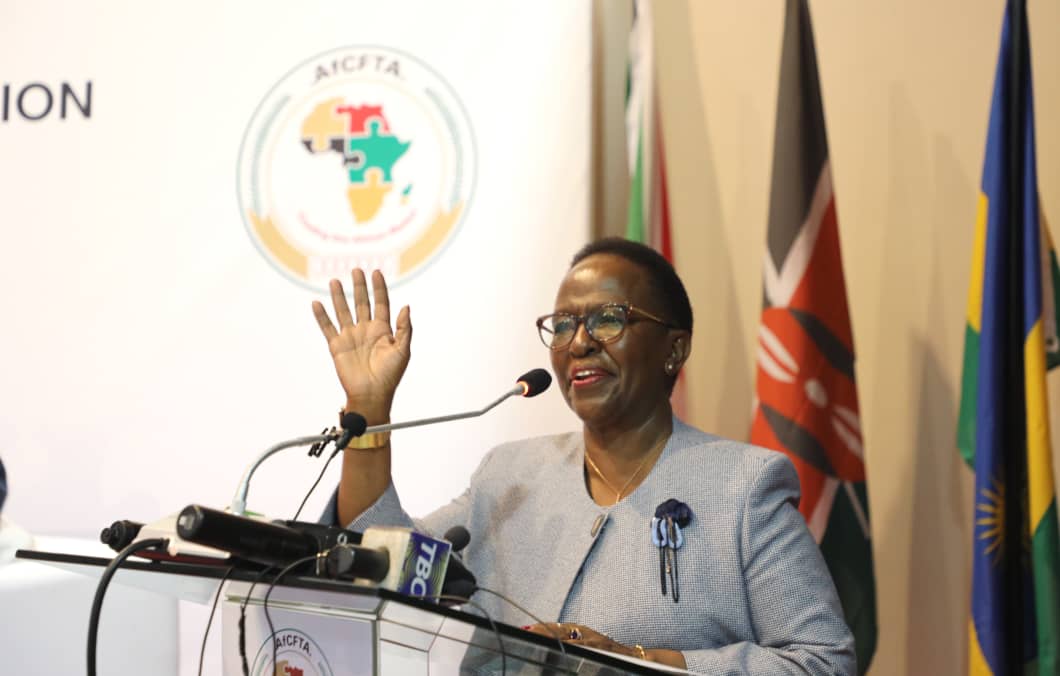 Tanzania’s Minister for Foreign Affairs and East African Cooperation, Hon. (Amb.) Liberata Mulamula said that interconnectivity across Africa was crucial if the continent was to exploit its vast potential for industrialisation, trade and investment.

Amb. Mulalmula observed that air tickets across the continent were not cheap due to lack of adequate competition among existing national and private airlines, adding that it was far much cheaper to travel to destinations outside Africa than those within the continent.

On efforts to create wealth through increased trade and investment, Amb. Mulamula said that initiatives to create wealth under the AfCTFA should also be focused on fair distribution and sharing of the wealth to reduce the widening gap between the rich and the poor.

“We are very optimistic that phase two of the negotiations will enhance the trade environment through enhancing the market economies function well by improving efficiency and healthy competition among businesses,” said Hon. Mulamula.

The overall objective of the four day meeting that started on 4th June, 2022 is to enable the RECs to build consensus around common positions critical to the continent’s success at creating an African Economic Community. 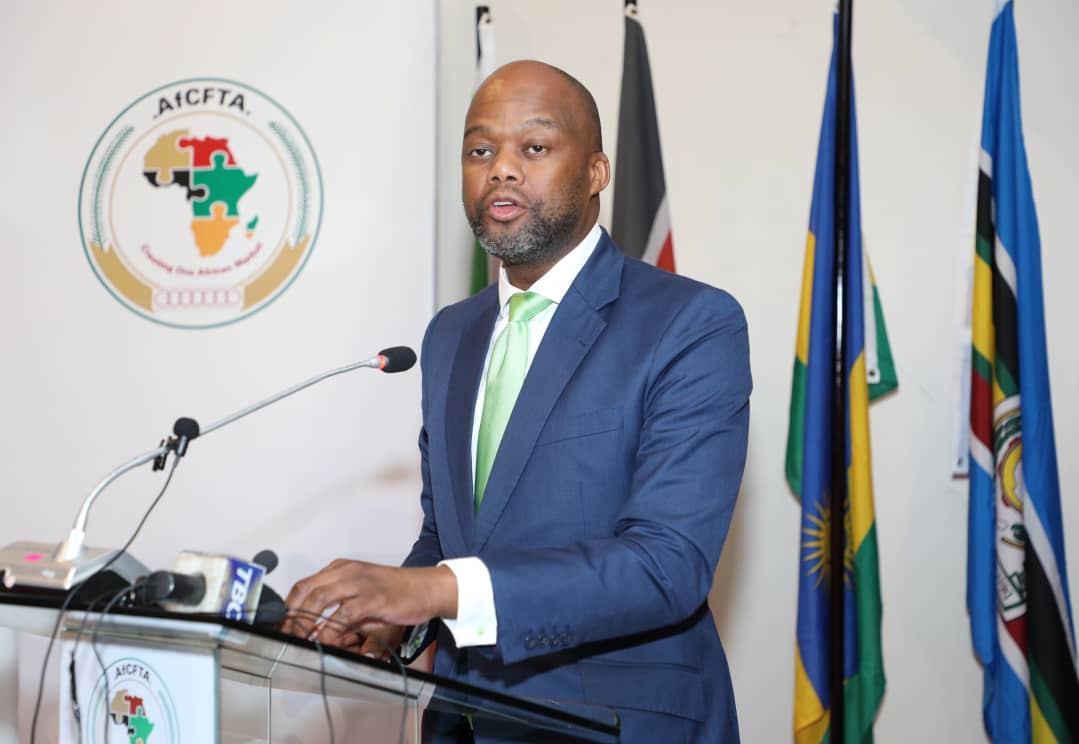 On his part, Secretary-General of the AfCFTA Secretariat, Hon, Wamkele Mene said that the implementation of the AfCFTA Agreement is by necessity, a complex and highly collaborative undertaking, drawing on the expertise and experience of all key stakeholders including RECs.

Hon. Wamkele said that the private sector should take the lead in the implementation of the AfCFTA, noting that while AfCFTA and the RECs were supposed to facilitate across Africa, trade must be driven by the private sector.

The AfCFTA SG said that Africa must prioritise industrialisation and investment promotion so as to make her products competitive on the global market and increasing her share of global trade.

Hon. Wamkele said that it was unfortunate that 55 African countries currently contribute just 2 percent of global trade output and 3 percent of to the global GDP while Singapore, a city-state that is 600 square miles in geographical area, has 6.2 percent share of global trade.

The AfCFTA SG attributed this sad state of affairs to lack of industrial development and human resource gaps.

Hon. Wamkele advocated for self-sufficiency and industrialisation in the continent, noting that Africa should as a matter of urgency develop capacity to process its mineral and agricultural wealth is it is to benefit from its vast natural resources.

He underscored the importance of effective collaboration between the RECs and the AfCFTA Secretariat in ensuring that the AfCFTA outcomes are consistent with regional advancements in trade integration made thus far and the projections for the future.

Hon. Wamkele disclosed that the AU Assembly of Heads of State and Government directive that mandated the AfCFTA Secretariat, the African Union Commission, and the RECs to develop a Framework of Collaboration to enhance complementarity, synergies, and alignment of programmes and activities to facilitate the effective implementation of the AfCFTA. 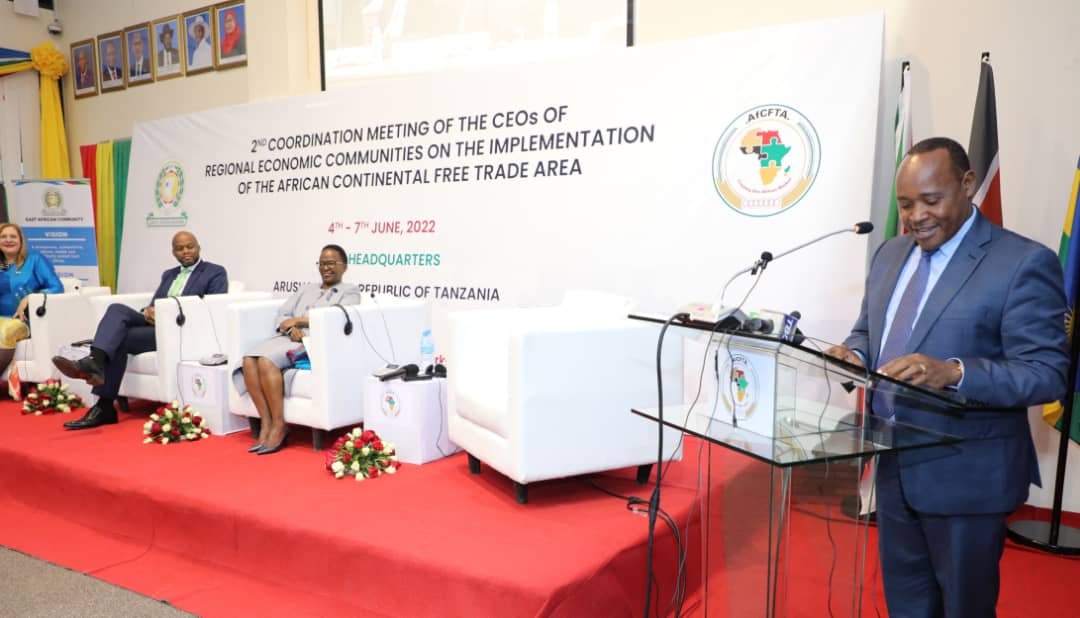 Speaking at the event, EAC Secretary General Hon. (Dr.) Peter Mathuki said that with a market of around 1.3 billion consumers and a GDP of $3.4 trillion, AFCFTA has opportunities to unlock trade in the continent and redesign the architectural framework of its economic systems.

Dr. Mathuki disclosed that Africa is one of the world’s fastest-growing economies; however, trade in goods and services accounts for an estimated 3% of global exports and imports on average.

“The share of Intra African trade remains low: on average, 13% for intra-imports and 20% for intra exports, while Extra African trade accounts for more than 80% of the total trade. Africa’s exports to the rest of the world consist of raw materials, such as oil, gas, minerals, and agricultural commodities, with little to no value addition” he added

Other constraints according to Dr. Mathuki were customs, administrative and technical barriers, limited productive capacity, lack of factors of market integration, and inadequate focus on internal market issues.

He noted that the efforts to address binding constraints are currently underway through the AfCFTA and AU’s Boosting Intra-African Trade (BIAT) action plan.

“If well-resourced and fast-tracked, these two initiatives will drive economic growth, industrialisation and development across Africa,” added Hon Mathuki.