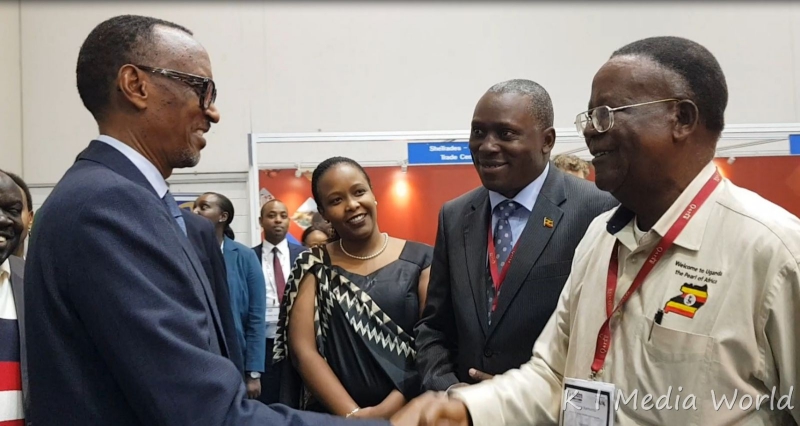 H.E Paul Kagame, President of the Republic of Rwanda on Monday 6th November, 2017, toured the EAC Partner States stand at the World Travel Market (WTM) and recognized the joint tourism promotion efforts by the Partner States. The President was at the World Tourism Market to receive his World Tourism Awards given in recognition of his efforts to foster sustainable tourism development in Rwanda. The award exemplified the commitment by East African leaders in promoting sustainable tourism.

Meanwhile, the EAC High Commissioners/ Ambassadors in London, Heads of Tourism Boards for Partner States, and the Secretariat staff held a pre- WTM meeting on 5th November 2017 at the Uganda High Commission premises.

The objective of the meeting was to provide the High Commissioners and Ambassadors with information on the current status of the Tourism sector in the EAC region and on the agreed priorities for the next financial year and in the 5th EAC Development Strategy, as well as to review the programme of the EAC joint event with Partner States at the World Travel Market.

The meeting was co-chaired by the EAC Deputy Secretary General in charge of Productive Sectors, Hon. Christophe Bazivamo and the Uganda High Commissioner, H.E Julius Moto.

H.E Moto welcomed the participants to the meeting and observed that tourism sector was quite significant for EAC economies and therefore it required concerted promotional efforts. He further noted that joint participation at the World Travel Market was quite critical given that it was the largest international trade fair with an attendance of about 50,000 people. “This offers the EAC as a region and the Partner States an opportunity to market their tourism products and therefore the need to gear marketing efforts towards high spending tourists to ensure maximum benefits for the region” noted Uganda’s High Commissioner in the UK.

The EAC Deputy Secretary General in charge of Productive and Social Sectors highlighted major undertakings and progress made in the EAC integration process that include; EAC being recognized as one of the fastest growing regions in Sub-Saharan Africa and the largest regional economic blocs with the largest single market in Africa with a total population of about 170 million.

The EAC official briefed the Envoys on how EAC had become a fully-fledged Single Customs Territory since 2014 with major benefits such as reduced turnaround times in clearance and transportation of goods across borders. Other milestones include implementation of Common Market Protocol and significant removal of non-tariff barriers to trade; and the development of the EAC International e-passport and Partner States such as Kenya and Burundi have started issuing the passport.

The EAC team also met the UN World Tourism Organization Director of Programme for Africa, Ms. Elcia Grandcourt on 7th November 2017, with whom they discussed possible areas of technical co-operation in tourism. These will include development of quality assurance mechanisms for the tourism sector, harmonization of tourism statistics, and development of a regional tourism marketing strategy.

The two institutions will enter into an MoU on technical co-operation. The possibility of staging an EAC-UNWTO joint conference in East Africa was also discussed. The objective would be to build capacity of key tourism stakeholders.