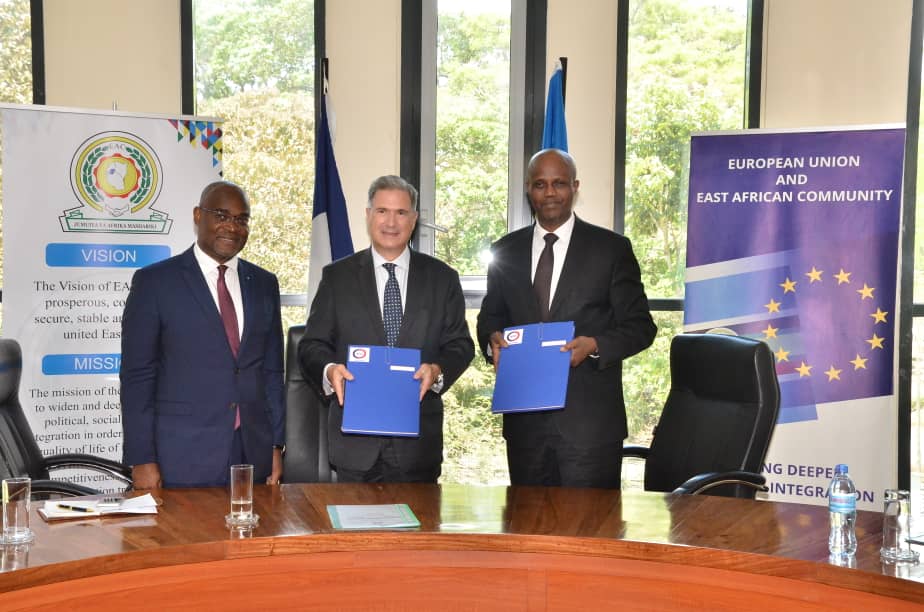 EAC and the French Government sign a Memorandum of Understanding

East African Community Headquarters, Arusha, Tanzania, Friday, 23rd October, 2020: The East African Community and the French Government signed a Memorandum of Understanding (MoU). The MoU was signed at the EAC Headquarters in Arusha, Tanzania by the EAC Secretary General Amb. Liberat Mfumukeko and the Ambassador of France to Tanzania accredited at EAC, H.E. Frédéric Clavier.

The objective of the MoU is to establish a framework of cooperation and facilitate the Parties’ strategic partnership to draw on expertise and support collaborative initiatives to sustain the EAC Integration Agenda. Highlighted in the five (5) year MoU are the key priority areas of cooperation that the two parties seek to explore. These include Energy, Climate Change and Biodiversity, Industry, Private Sector Development and Investment Promotion, Customs and Trade, Financial Sector, and Capacity Building and Project Development. For the purpose of concretizing cooperation in the earmarked sectors, the Government of France will mobilize different actors and instruments.

Prior to the signing of the MoU, Ambassador of France to Tanzania H.E Frederic Clavier who was accompanied by the French Development Agency (AFD) Regional Director Eastern Africa, Mr. Christian Yoka, held in-depth discussions with the EAC Secretary General focused on how both parties could jointly work together to effectively support key sectors with significant impact on the betterment of livelihoods of EAC citizens.

In his remarks, Amb. Liberat Mfumukeko thanked the French Government for their interest in supporting ongoing initiatives. He emphasized that EAC has made great strides under each of its 4 Pillars of integration, highlighting some of the key achievements in the implementation of the Single Customs Territory and the Common Market Protocol.

On his part, the Ambassador appreciated the achievements realized by the Community thus far and especially those within the Customs Union and Common Market pillars. He further stated that in view of these achievements, the French Government seeks to develop a comprehensive framework of cooperation which cements its commitment to the EAC integration process.

Further in the discussions, both parties highlighted the need to convene a follow-up technical meeting in order to narrow down on the thematic areas of cooperation. This will then be followed by development of a detailed joint support program for implementation through the next five years as entailed in the MoU.

French Development Agency (Agence Française de Développement, AFD): a public financial institution that implements the policy defined by the French Government. It works to fight poverty and promote sustainable development. This public institution is active in Africa, Asia, the Middle East, Latin America, the Caribbean and the French overseas territories, where it finances and supports projects that improve living conditions of populations, promote economic growth and protect the planet.

Its headquarters is located in Paris. Its teams are based in Paris, Marseille and in a network of 72 agencies and representations abroad and in the French overseas territories.

In 2014, AFD earmarked EUR 8.1 billion to finance projects in developing countries and French overseas territories, a commitment up by 4% compared to 2013. According to the OECD, 2019 official development assistance from France increased 4.2% to US$12.2 billion.