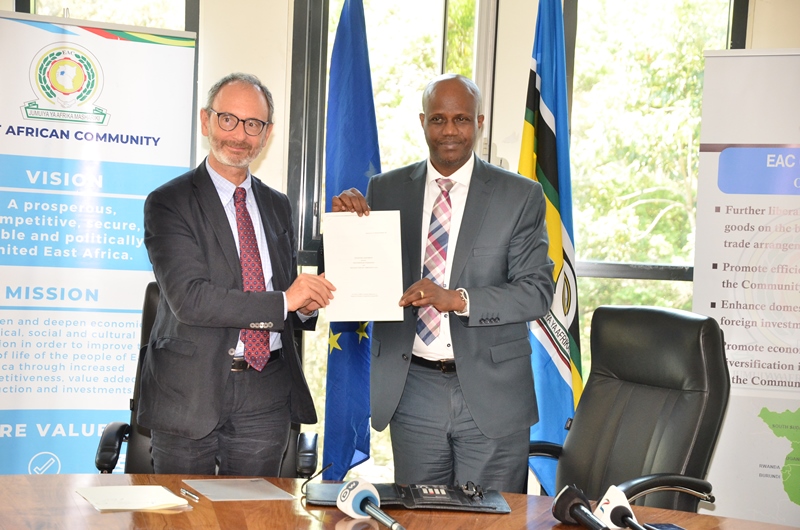 In particular, the Common   Objectives   in   Regional   Economic Integration (CORE) programme will be instrumental in moving towards a fully-fledged Customs Union, by supporting more robust information, communication and technology (ICT) based data exchange protocols for the clearing of goods. Thanks to digital solutions, customs operations will be simpler, quicker, as well as safer during this pandemic situation thereby resulting in a reduction of the costs of cross-border trade.

A new impetus will be given through this programme to promote free movement of services, a crucial building block for the creation of the EAC Common Market. The CORE programme will support implementation of services’ liberalisation commitments, facilitating mutual recognition of professions and allowing companies to provide their services beyond their national borders. During the first two years, the focus of this programme will be on the insurance, accounting and distribution sectors. Additional sectors could be covered at a later stage.

The capacity of the EAC Secretariat will be enhanced in order to ensure that this institution can deliver its overall mandate.

On his part, EAC Secretary General Amb. Mfumukeko expressed the Community’s appreciation for the continuous support from the European Union to the EAC. He said the financing agreement comes at the right time when the Community had just marked its 20th Anniversary, adding that the EU had made significant contribution to the achievements made by the EAC in all the four pillars of integration, namely: the Customs Union, Common Market, Monetary Union and Political Federation.

“It is my sincere hope that the EAC cooperation with EU will grow stronger based on the already existing robust foundation of our common goals. The EU has for many years provided significant support to various EAC programmes in sectors as diverse as peace and security, promotion of democracy and good governance, and fisheries, ’’ said Amb. Mfumukeko.

This 60-month programme will be implemented by the EAC Secretariat. It will complement several other initiatives to providing economic empowerment to the people of the East African Community.

From the European side, this action is guided by the support for developing countries to better integrate into the world economy and more effectively use trade to support poverty eradication and sustainable development for all as enshrined in the EU 2012 Trade, Growth and Development Communication, the EU Aid for Trade Strategy and the Agenda for Change.

The 4th EU-Africa Summit in 2014 identified trade facilitation, continental integration and boosting intra-African trade as one of the priorities for the implementation of the Joint Africa-EU Strategy (JAES). The action is also linked to the Prosperity dimension of the New European Consensus on Development: "Our world, our Dignity, Our Futureʺ, calling for inclusive and sustainable growth and jobs through support to measures that help improve the economic governance and business environment. Furthermore, it is in line with the recently launched Africa-Europe Alliance for Sectors covered by agreed Schedules are: business services (management consulting, professional services - i.e. accounting, architectural etc.), communications (postal, telecommunication etc.), distribution, educational, financial, tourism and transport services.

A needed critical change is to upgrade IT and leverage it to implement the SCT, particularly as concerns three functions: exchange of data between Partner States and with the EAC Secretariat for customs operational purposes, extraction of data from national customs systems for a systematic monitoring, and support functions with a regional component (i.e. risk management, valuation).

A well-developed and integrated services sector is important in shaping and driving the economic performance and overall development of the East African region. Not only do services contribute significantly to the gross domestic product (GDP) of the region – at approximately 45%, but they also contributed significantly to employment, foreign direct investment and exports.

There is a growing recognition of the important role of services in the economies of EAC Partner States. Despite this and although notable progress has been made in some services sectors such as professional services and aspects of financial services, trade in services in the EAC has continued to face a number of barriers and challenges which prevent the region from fully reaping the benefits of a well-integrated services market.