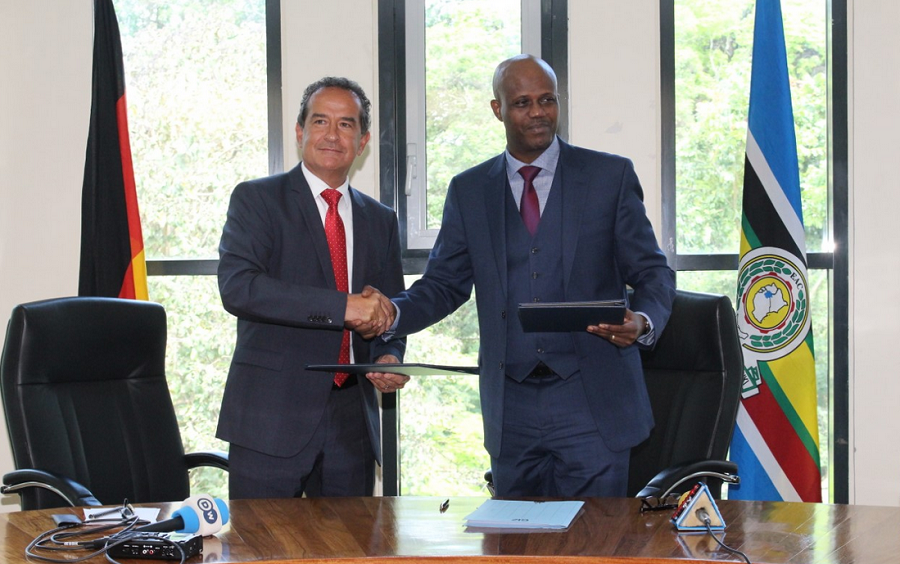 The Government of the Federal Republic of Germany announced additional funds of US$128 million (EUR 115.8 million) today which will be supporting health and education programmes in the East African Community.

The majority of the funds (US$105 million [EUR 95 million]) will be going towards the EAC’s immunization programme with Gavi, the Vaccine Alliance. The EAC Secretary General, Amb. Libérat Mfumukeko, and the Chargé d’Affaires of the Federal Republic of Germany, Jörg Herrera, jointly signed the Agreement in Arusha today.

With the additional grant, the programme will be financing the procurement of at least four different types of vaccines (Pentavalent, Rotavirus, Pneumococcal and Measles) for children in all six Partner States of the East African Community. The programme is financed through the German Development Bank, KfW, and implemented in collaboration with Gavi, the Vaccine Alliance.

The cooperation aims at reducing child mortality in the region and mainly targets newborns. To date, German Development Cooperation with the EAC has financed nearly 80 million doses of life-saving vaccines for the region since the support started in 2013 and the average immunization coverage in the region was substantially increased, making the EAC’s immunization programmes the strongest in Sub-Sahara Africa.

Other funds including US15.5 million will be going towards the “EAC Regional Centre of Excellence for Health Supply Chain Management,” located at the University of Rwanda in Kigali, US$2.2 million to the support of Ebola preparedness within the ongoing EAC-German project “Regional Network of Reference Laboratories for Communicable Diseases” and US$5.3 million to the “Academic Centre for Digital Innovation in East Africa” at the Nelson Mandela African Institution of Science and Technology located in Arusha.

Speaking at the event, Amb. Mfumukeko thanked Germany for its continued support to the EAC and the integration process in general. Amb. Mfumukeko said the immunization programme in particular would go a long way in saving the lives of millions of children in the six EAC Partner States.

“The implementation of 2018 (Phase VI) which had a commitment of EUR 30 million (US$34.1) million has been fully concluded. The amount was fully disbursed to GAVI in December 2018 and spent on Pentavalent, Rotavirus and Pneumococcal vaccines in all EAC Partner States. GAVI has provided full documentation on the use of the fund including the number of doses per vaccine and country,” said the Secretary General.

“The new commitment of US$105 million for Phase VII (EUR 95 million) will be used for the procurement of four vaccines (Pentavalent, Rotavirus, Pneumococcal, Measles) with possible extension to Yellow Fever and HPV vaccines in all EAC Partner States. Vaccine procurements may take place in 2019 and 2020,” added the SG.

In his remarks, the German Chargé d’Affaires, Jörg Herrera, underscored Germany’s commitment to extend the ongoing health and education programmes with the EAC Secretariat saying the programmes would especially benefit the young generation of East African citizens.”

“Investing in the health sector is not only an investment for sustainable social development but also for a country’s and the region’s economic development. Vaccinations are a highly effective and cost efficient means to fight child mortality. The German Government highly commends the EAC’s efforts to immunize every child,” said Herrera.

EAC and Germany can look back on over 20 years of successful development cooperation which focusses on Health as well as Regional Economic and Social Integration. Germany's development cooperation, on behalf of the German Federal Ministry for Economic Cooperation and Development (BMZ), has to date contributed to the regional integration in East Africa through a variety of programmes and projects. Including the commitments announced today, the German contributions to EAC-German Development Cooperation programmes will have added up to over USD 480 million (EUR 436.8 million).

The Signing of the Government Agreement was witnessed by the Deputy Executive Secretary of the Inter-University Council for East Africa, Prof. Mike Kuria, the Director of Infrastructure at the EAC Secretariat, Dr. Kamugisha Kazaura, Ms Norzin Grigoleit-Dagyab, the Head of Regional Cooperation from the German Embassy and Pascal Kanyinyi, KfW’s Senior Project Coordinator Health.

Emmanuel Mtingwa
Communications Officer
German Embassy
Tel: +255 22 2212-300
Email: This email address is being protected from spambots. You need JavaScript enabled to view it.