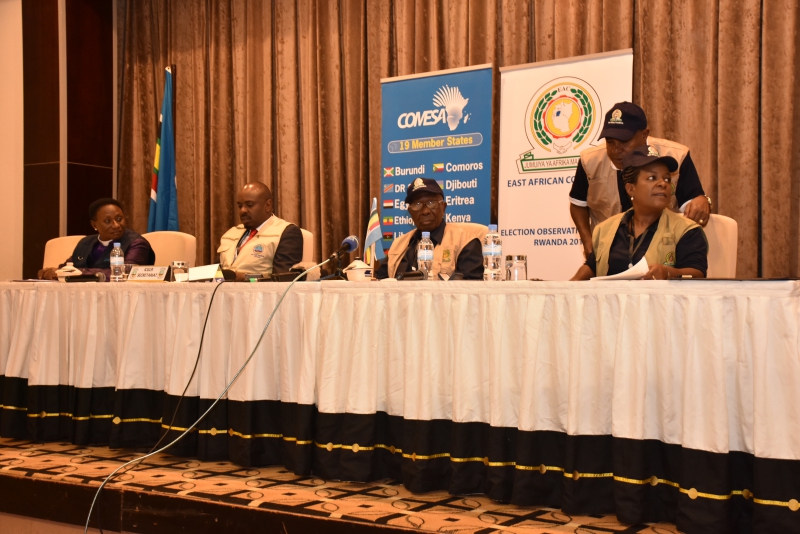 Three Election Observer Missions including the East African Community (EAC), Common Market for Eastern and Southern Africa (COMESA) and the International Conference of the Great Lakes (ICGLR) have given a clean bill to the Rwandan Presidential Election in which President Paul Kagame won with a landslide.

In preliminary statements at a press briefing in Kigali today, the Heads of Mission of the three Election Observer Missions (EOMs) said that the election was free and fair and that it was held in a peace and secure atmosphere.

The three, Hon. Moody Awori for EAC, Bishop Mary Nkosi (COMESA) and Hon. Arinaitwe Rwajakara further noted that all presidential candidates including the two from the opposition were provided with security and allowed to campaign freely across the country.

They noted that the media, both public and private, played a crucial role in the campaigns by according balanced and equitable coverage to all the presidential candidates during campaigns in addition to highlighting the key policy issues that were at the heart of the campaigns.

“It was noted that the media including the state-owned Rwanda Broadcasting Agency radio and television stations gave equal airtime to the three presidential candidates to market themselves to the electorate. The EAC EOM noted that while editorial airtime was doled out equally to the candidates, the ruling Rwandan Patriotic Front was more visible in the political advertising segment as the only entity that bought advertising slots,” said Awori.

Noting that only the ruling Rwandan Patriotic Front party had agents at nearly all the polling stations, the EOMs called on all Political Parties and Independent Candidates to facilitate the deployment of agents at most polling rooms.

In their preliminary recommendations, the three EOMs however called for capacity building especially the need to train polling clerks on election management.

They recommended that the practice of playing loud music while the voting process was underway be reconsidered, as it appeared disruptive and noisy.

In its recommendations, EAC urged the Executive and Parliament in Rwanda to consider amending the electoral laws to further empower the National Electoral Commission (NEC) and enhance its autonomy.

EAC also asked the Executive and Legislature in Rwanda to consider legislation to provide for equitable public funding of electoral campaigns.

EAC advised the NEC to explore prospects of limiting support by security agencies to providing security and progressively delinking security personnel from transportation of election materials as per good international practice.

In its recommendation, COMESA urged the Government of Rwanda and NEC to gradually consider incorporating information technology in the electoral process, particularly the transmission of results.

The Rwandan presidential election was contested by the incumbent president Paul Kagame of the Rwandan Patriotic Front, Frank Habineza of the Democratic Green Party and journalist Philippe Mpayimana who is running as an independent candidate. President Kagame won the election sweeping 98 per cent of the votes cast.