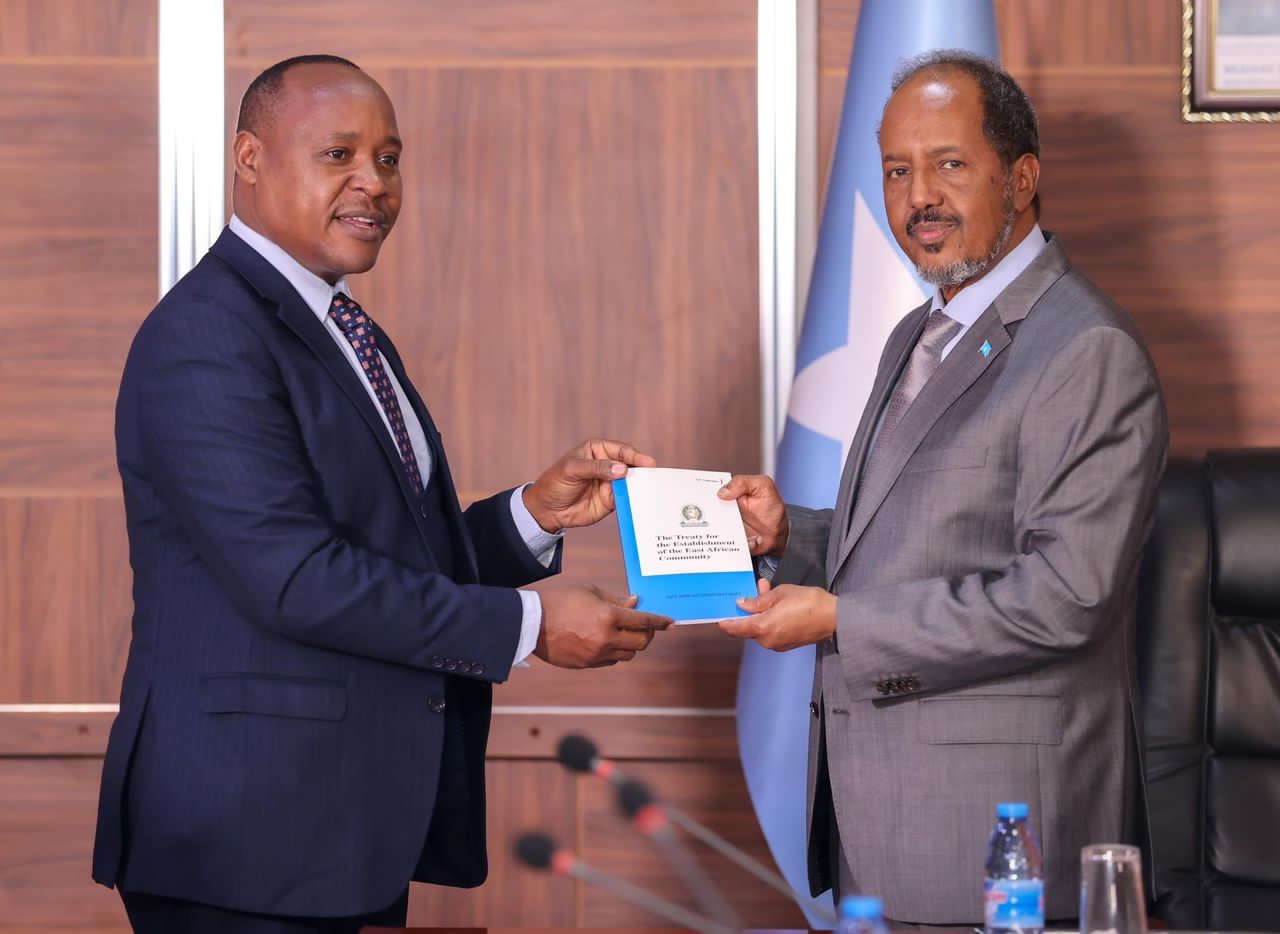 We are ready to join the Community, Somalia President says

The president said Somalia joining the Community has been a delayed dream for the people and the Government of Somalia and urged the Secretary General, Hon. (Dr.) Peter Mathuki, to expedite the process of admission so that his country can be the 8th member of the EAC.

The President made the call during the maiden visit of Dr. Mathuki to Mogadishu. Dr. Mathuki formally delivered the 22nd EAC Ordinary Summit’s directive to the Council to expeditiously fast-track the verification exercise for Somalia in accordance with the EAC procedures of admission of new countries into the Community.

“Somalia belongs to the East African Community. There is no country among the EAC Partners States that is not linked by business with Somalia and existing historical linkages include language and culture,” said President Mohamud.

President Mohamud told the Secretary General that his country was working tirelessly to remove all the security challenges with the support of some of the EAC member states.

“We are counting on you Secretary General to send the verification team here in Mogadishu to start the process,” he added.

The president reiterated the strategic position of Somalia saying that the Community will benefit significantly through increased movement of goods, services and people across the bloc in addition to expanding intra-regional trade the already established Somali businesses in the region.

President Mohamud said that the Somalia’s long Indian Ocea Red Sea route that link Africa to the Arabian Peninsula was a vibrant economic zone, adding that the exploitation of Somalia’s blue economy resources such as fish and the expansive coastline would boost the regional economy.

On his part, Dr. Mathuki commended the desire of the Federal Republic of Somalia to join the EAC and assured the president that the EAC Secretariat would do it’s part to make sure that Somalia admission process is expeditiously fast-tracked in accordance with the EAC Procedure for Admission of New Members into the EAC.

The Secretary General told the president that after his maiden visit, the EAC Secretariat would write to Partner States to request for nominations for members to constitute the EAC Verification Team. The Team will comprise 3 experts from each Partner States and officials from the Secretariat.

In addition, upon the receipt of the names from the Partner States, the Secretariat will submit the names to the Council for approval to conduct the exercise.

Dr. Mathuki assured the President of his total commitment in leading the process of admission of Somalia  Into the Community as directed by the Summit.

The Federal Republic of Somalia on its part communicated back on 17th November, 2018, informing the Secretariat that the timing for the working visit was not conducive then and that an alternative date was to be agreed upon by the parties.

The 22nd Ordinary Summit of the EAC Heads of State observed that the Verification Exercise for the Admission of the Federal Republic of Somalia into the Community had not been undertaken and directed the Council to expeditiously fast-track the verification exercise in accordance with the EAC Procedures for admission of New Members into the EAC and report to the 23rd Ordinary Meeting of the Summit.