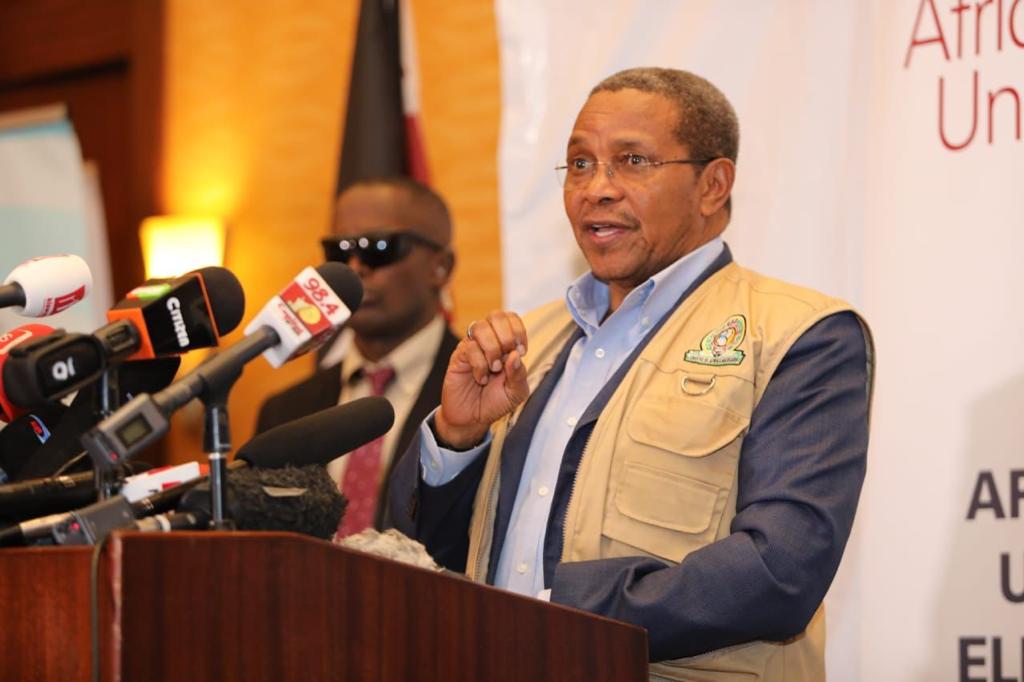 East African Community Headquarters, Arusha, Tanzania, 11th August, 2022; The EAC Election Observation Mission (EAC-EOM) has expressed satisfaction at the manner in which the voting exercise in the Kenya 2022 General Election was conducted and called on Kenyans to continue maintaining peace after the results of the elections are declared.

Speaking during a press briefing convened to release the preliminary findings of the EAC-EOM in Nairobi, the Head of Mission, H.E. Dr. Jakaya Mrisho Kikwete, lauded the Independent Electoral Boundaries Commission (IEBC) for the improvements made in regards to transparency, preparations, and management of the 2022 Kenya General Election.

“The Mission commends the IEBC on the successful use of technology in voter registration, voter identification and transmission of results. It has improved efficiency, and increased transparency of the election process,” said Dr.Kikwete.

Dr. Kikwete, who is also a fformer President of the United Republic of Tanzania, cited challenges in the identification of voters using the KIEMS kits and recommended for prompt identification and resolution of the problems relating to the kits for better performance in future elections.

“Further, the Mission noted that at various stages of the electoral process, there were problems associated with social media, particularly regarding disinformation, misinformation and hate speech,” said Dr. Kikwete.

“The Mission commends various stakeholders for their efforts to address these challenges and more so the mainstream media for voter education and coverage of the electoral process,” he added.

Dr. Kikwete said that the EAC-EOM witnessed a calm, peaceful, and orderly environment.

“Most polling stations opened on time, but there were a few which opened late for various reasons including late setting up of the station, late arrival of polling materials or polling officials. However, we were pleased to note that the time lost was compensated by late closure of polls in the concerned polling stations. It is recommended that; the IEBC should take corrective measures to ensure that these deficiencies do not recur in future elections,” he said.

The Head of Mission said that at all polling stations, security personnel were present and highly professional in the discharge of their duties and responsibilities.

“The security personnel did not interfere with electoral processes nor did they intimidate voters. The Mission commends the Kenya Police Service for a job very well done,” he said.

Dr. Kikwete said that the mission observed that agents of political parties and candidates were present at polling stations and were not encumbered in performing their duties.

“It was a bit concerning that it was only the major political parties that were able to deploy agents and also intriguing to note the presence of many agents of independent candidates,” he said, adding that the protocols and procedures for opening and closure of polling were observed.

Further, Dr. Kikwete said that the EAC Observers noted that the party agents were placed too far from the polling official identifying the voters and called on the IEBC to consider placing party agents close to such officials to ascertain the authenticity of the voters.

The EAC Secretary General Hon. (Dr.) Peter Mathuki constituted the East African Community Election Observation Mission to the 2022 Kenya General Election, drawn from the EAC region, following the invitation of the Independent Electoral and Boundaries Commission (IEBC) of the Republic of Kenya.

READ: PRELIMINARY REPORT OF THE OBSERVATION MISSION - EAC ELECTION OBSERVER MISSION TO THE 9TH AUGUST 2022 GENERAL ELECTIONS IN THE REPUBLIC OF KENYA