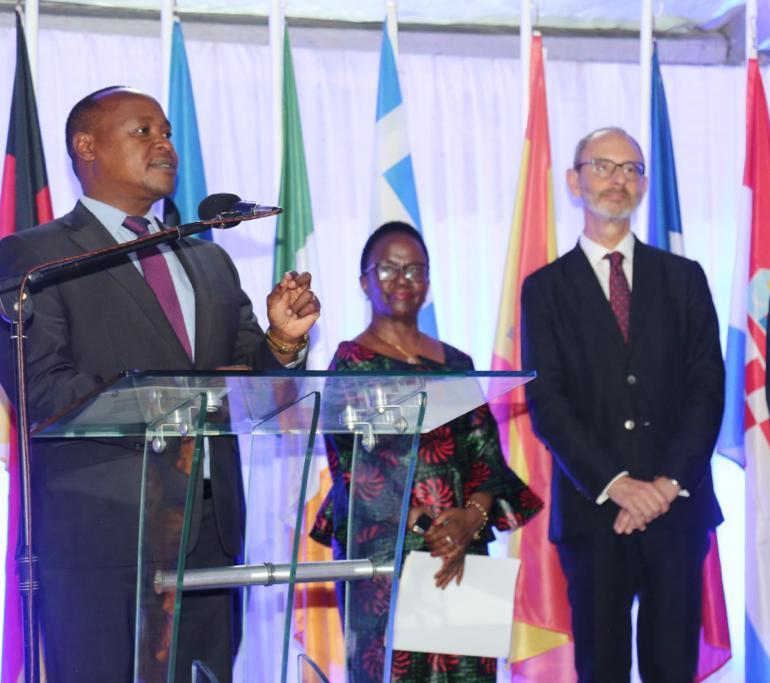 Written on 10 May 2022. Posted in International Relations

The Secretary General said that the EU for a number of years has been supported the EAC regional integration agenda through the National Indicative Programmes (NIPs), the Regional Indicative Programme (RIP) and implementation of several East Africa Road Network/Transport Corridors, Energy projects, migration programmes and frameworks for democratic governance among other programmes.

“I recently engaged with the European Parliament on strengthening trade and investment relations between EAC, African and the EU. These discussions were further re-emphasized during the recent AU-EU Summit held last February in Brussels,” said Dr. Mathuki.

Dr. Mathuki was speaking at the annual Europe Day celebrations that took place in Dar es Salaam, Tanzania. Europe Day that falls on 9th May every year commemorates the signing of the Schuman Declaration of 1950.

Hon. Mathuki said that Europe Day is anchored on an ambitious plan to secure long-term peace in post-war Europe that is considered the beginning of what is now the European Union.

Speaking at the same event, Hon. Liberata Mulamula, Minister for Foreign Affairs and East African Cooperation, United Republic of Tanzania said that as EU celebrates Europe Day, the EAC region take pride in the milestone achievements recorded over the past decades.

“We are grateful for the sectoral specific support in agriculture, improvement of transport and energy infrastructures, improving access to water, education, health, strengthening good governance, institutional capacity building, trade facilitation and the fight against piracy, to mention but a few”

Hon. Mulamula hailed the EU Companies for being active investors in Tanzania, with more than 100 companies, employing around 151,000 Tanzanians.

“We commend the EU for continuing to maintain the values of the Union and like the EU, we believe that in numbers there is strength hence we remain committed to enhance integration through the blocs namely: EAC, SADC, AU, and AfCFT,” said Hon. Mulamula.

She reiterated Tanzania’s renewed and revitalized commitment to working closely with the European Union nurtured by shared values and interests at bilateral, regional and multilateral dimensions for the mutual benefits of the two parties and global prosperity

Europe Day is the celebration of Europe’s achievements and unity to commemorate the signing of the Schuman Declaration on 9 May 1950. The declaration was the ambitious plan to secure long-term peace in post-war of Europe as the beginning of what is now the European Union. In 2022 Europe remains unified in working for peace, providing support to Europeans everywhere.