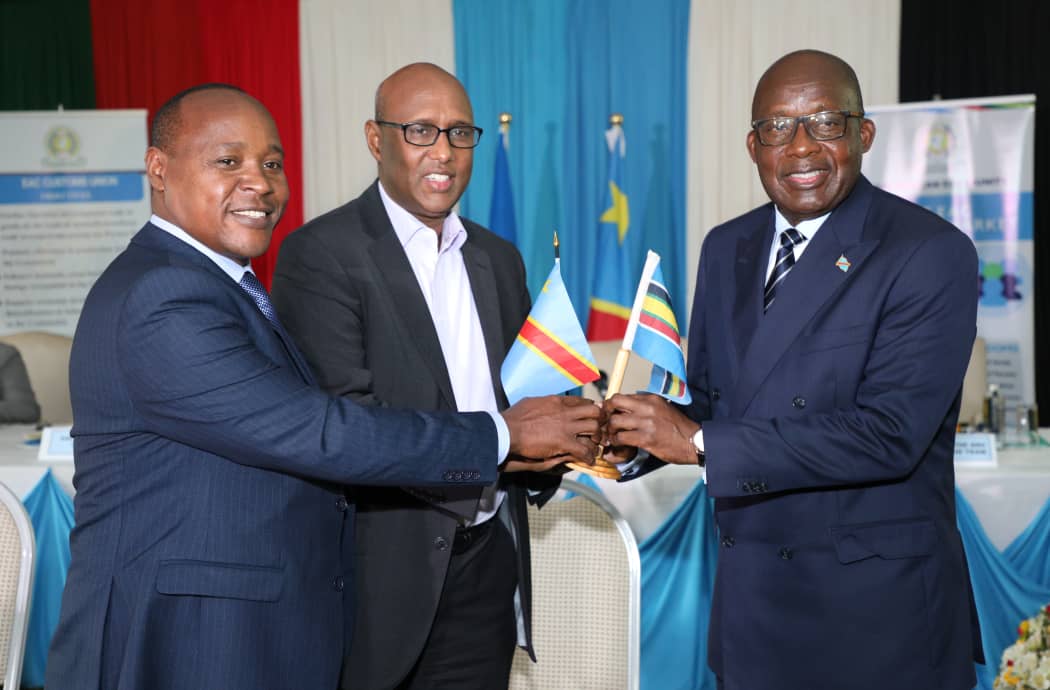 DRC’s Deputy Prime Minister and Minister for Foreign Affairs, Hon. Christophe Lutundula Apala Pen’Apala, said that DRC was looking forward to increased trade and investment, and strengthened relations with EAC, adding that her relations with EAC Partner States had largely been at a bilateral level.

Hon. Pen’Apala said that DRC was keen on cooperating with the EAC for maximum exploitation of both natural and human resources in the region.

Hon. Pen’Apala expressed hope that this would be the last round of negotiations before DRC is admitted into the EAC.

The Minister said that DRC has a big population who are consumers that constitute a big market for the EAC, adding that DRC was also in dire need of investors and was therefore offering incentives for entrepreneurs who would like to invest in the country.

Hon. Pen’Apala noted that DRC faces security challenges in the eastern part of the country, adding that the country was therefore keen on tackling these challenges together with the EAC.

The Minister disclosed that DRC had embarked on a national programme of reconstruction in various sectors including infrastructure, agriculture, energy and environmental conservation. He said that DRC had the world’s second largest natural ecosystem in the Congo Forest and was keen on preserving this system from wanton destruction to mitigate the effects of climate change.

Asked whether DRC’s membership to EAC would pose challenges because it already belongs to COMESA and SADC, Hon. Pen’Apala said that there was no problem in multiple membership to various regional economic communities (RECs), adding that all RECs in Africa were working in harmony to ensure that Africa becomes a real common market by the year 2063.

Hon. Pen’Apala was addressing journalists after the official launch of the negotiations between the EAC and DRC for the admission of the latter into the Community in Nairobi, Kenya.

Speaking at the media briefing, the Chairperson of the EAC Council of Ministers who is also Kenya’s Cabinet Secretary for EAC and Regional Development, Hon. Adan Mohamed, said that the EAC and DRC negotiation teams were expected to conclude their negotiations within 10 days.

Hon. Mohamed said that the report of the negotiations would then be presented to the Council who would later submit it to the Summit of EAC Heads of State for consideration.

CS Mohamed said that the negotiations between EAC and DRC for the admission of the latter into EAC was good news for a continent that has been performing below its potential in terms of its share of global trade.

On his part, EAC Secretary General Hon. (Dr.) Peter Mathuki said that EAC expects seamless negotiations with DRC that would result in increased trade and investment opportunities for the benefit of the people of East Africa.

The Secretary General said that substantial progress had been made since the Verification Mission visited DRC in the months of June and July 2020.

“As you are aware the 18th Extra-Ordinary Summit of Heads of State, the summit received and considered the report of the Council on the Verification Mission on the Admission of the DRC to join the EAC and directed the Council to expeditiously commence and conclude negotiations with the DRC for admission to the East African Community and report to the next Summit,” said Dr. Mathuki.

Dr. Mathuki said that the negotiations were an important milestone in the entire roadmap of the admission of DRC into the EAC.

“Once this phase is successfully concluded, it shall pave the way for the accession phase which literally concludes the admission process and upon pronouncement of Summit on the matter, DRC will be admitted as the seventh member of the EAC,” said Dr. Mathuki.