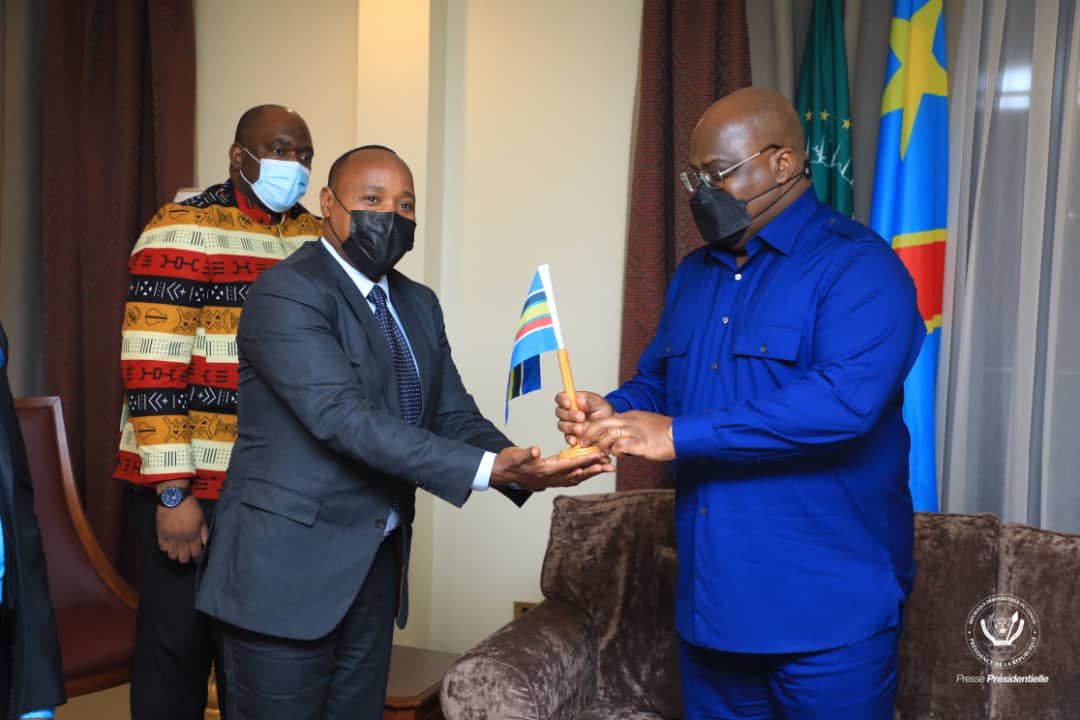 East African Community Headquarters, Arusha, Tanzania, 26th June, 2021: The President of the Democratic Republic of Congo, His Excellency Felix Tshishekedi, on Friday evening officiated over the launch of the East African Community Verification Mission to the vast Central African country.

EAC Secretary General Hon. Dr. Peter Mathuki launched the mission in the presence of President Tshishekedi in the eastern DRC town of Goma. Hon. Dr. Mathuki presented the EAC flag to the DRC Head of State to mark the unveiling of the mission.

Speaking when he received the EAC delegation, President Tshishekedi hailed the progress made by the Community in its integration agenda, adding that DRC was committed to joining the EAC at the earliest opportunity.

The EAC Verification Mission that shall be in the country from 25th June to 4th July, 2021 is in the country to assess the suitability of the DRC for admission into the Community.

Addressing the media after his meeting with the President, Dr. Mathuki disclosed that the technical team in Kinshasa would engage their DRC counterparts to ensure that the verification was finalised and a report completed in time in readiness for presentation to the Council of Ministers who would in table it before the Summit of EAC Heads of State for consideration.

Dr. Mathuki said that the Heads of State would then make a decision on whether to admit DRC into the Community, adding that admission would make the DRC the 7th Partner State in the EAC.

“DRC neighbours five EAC Partner States, namely Tanzania, Burundi, Rwanda, Uganda and South Sudan. DRC would be an important country if it joins the East African Community and her entry would strengthen historical relations with East Africa,” said the Secretary General, who added that the admission of DRC would boost the Community economically and geopolitically.

“The people of DRC would benefit because of the free movement of people from DRC other countries without a visa if they are fully in the EAC,” said the SG, adding that DRC would also nominate nine members the East African Legislative Assembly and judges to the East African Court of Justice, the judicial organ of the Community.

Dr. Mathuki said that the entry of DRC into the EAC would also ease the free movement of goods especially to the country’s eastern region, which relies on the Dar es Salaam and Mombasa ports for her imports and exports.

“The president has received the message from the EAC Heads of State with a lot of happiness and he is looking forward to the report to be out and hopefully, very soon, DRC will be a full member of the East African Community,” he said.

The EAC Deputy Secretary General in charge of the Productive and Social Sectors, Hon. Christophe Bazivamo, is leading the Verification team in Kinshasa, the DRC’s capital city, on behalf of the Secretary General.

The Summit of EAC Heads of State at its 21st Ordinary Meeting held on 27th February, 2021 considered the application by DRC to join the Community and directed the Council to expeditiously undertake a verification mission in accordance with the EAC procedure for admission of new members into the EAC and report to the 22nd Summit.

The verification team will, among other things, review the current status of the DRC in international law and establish the country’s level of conformity with the criteria for admission of foreign countries as provided in the Treaty.

Under the Treaty, the Criteria for the admission of new countries into the Community include: acceptance of the Community as set out in the Treaty; adherence to universally acceptable principles of good governance, democracy, the rule of law, observance of human rights and social justice; potential contribution to the strengthening of integration within the East African region, and; geographical proximity to and inter-dependence between it (the foreign country) and the EAC Partner States.

The other criteria for admission of a new member are: establishment and maintenance of a market-driven economy; and; social and economic policies being compatible with those of the Community.