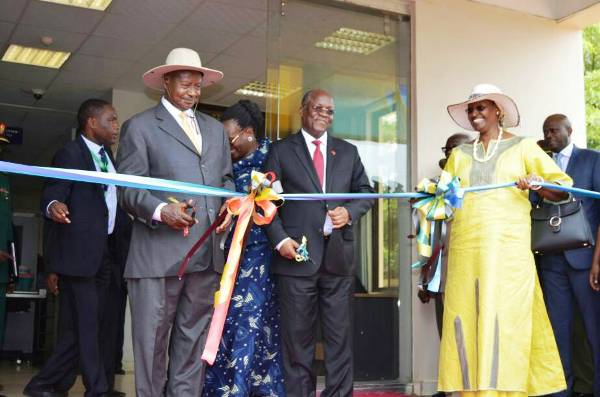 Written on 13 November 2017. Posted in Infrastructure

The construction of the Mutukula OSBP was carried out with funding of US$11.7million from the United Kingdom through the Department for International Development (DFID) while the systems and other related soft infrastructure equivalent to US$1.2million was funded by the Government of Canada, through Global Affairs, Canada.

The OSBP ensures effective border control mechanisms are in place. It will boost trade by cutting the time taken to clear goods between the two Partner States, thus contributing to a reduction in transport cost, whilst increasing volumes of transhipment cargo through the Central Corridor. It is expected that time to cross the border will reduce by at least one third.

An OSBP is a “one stop” form of border crossing point jointly managed by adjoining Partner States, where multiple border agencies cooperate and collaborate with each other, and effectively coordinate their activities to maximise their operational efficiency. OSBP arrangement brings together under one roof, all the Government agencies performing border crossing controls procedures, doing away with need for motorised traffic and persons to undergo clearance twice at both sides of the border. This arrangement expedites movement, release and clearance of goods and persons across borders, by streamlining border procedures, automation of the border processes and simplification of trade documents.

“I want to thank the British government who have supported us through TMEA, in the construction of the one stop border post making it easy to cross the borders and also to do business with Tanzania. Trade is a means that will help us create prosperity for the people.  My government is committed to creating wealth and jobs for the people through creation of enabling environment for services, Information Communication Technology, commercial agriculture and industries,” said President Museveni.

Addressing the crowd in Kiswahili and directing that only three police road blocks between Dar-es-Saalam and Mutukula are official, President Magufuli commended TMEA for its support to the government and underscored the importance of the OSBP saying

“Since time immemorial, Mutukula has been and remains an important node of Tanzania and Uganda. Its importance goes beyond the residents of the two countries as I understand that over 400 World Food Programme trucks carrying food aid for refugees go through here, so the faster clearance is benefiting not only our traders, but also persons in need, and that is important. I am happy that as a result of the OSBP in Mutukula, Tanzania is now able to collect revenue from agencies like Tanzania Bureau of Standards, who were initially not represented at this border point, but are now here because of the OSBP,” said President Magufuli.

In his remarks, EAC Secretary General Amb. Mfumukeko said that the framers of the EAC integration instruments envisioned the OSBPs and embedded them in the EAC Customs Union Protocol at the time of its negotiation.

“The first OSBP operations was at Malaba railway station between Uganda and Kenya over ten years ago. At the same time Customs Departments having realized that multiple examination of goods at our internal borders was wasteful and caused unnecessary costs to business, started joint examination of cargo of which Mutukula Border was a pioneer.  These pilot programmes provided a practical justification for upscaling the One Stop Border program in the entire region,” said Amb. Mfumukeko.

UKAID has provided over US$52million to the East African Transit Improvement Programme (EATIP) through TMEA, as a contribution to the World Banks’ East Africa Trade and Transport Facilitation Project (EATTFP).

Speaking at the event, the UK High Commissioner to Uganda, Peter West said that increasing Uganda’s trade with its neighbours and the rest of the world was vital for generating growth, promoting job creation and reducing poverty.

“Increasing Uganda’s trade with its neighbors and the rest of the World is vital for generating growth, promoting job creation and reducing poverty. The UK government is proud to have contributed over £90 million through TradeMark East Africa to support Uganda and Tanzania to reduce the barriers to trade. By cutting red tape, reforming customs processes and improving roads, ports, and border posts, the UK is supporting the creation of an environment essential for businesses to grow,” said West.

The envoy added that the completion of the Mutukula border post marks an important milestone towards our goal of reducing by a third the time to import from the EAC and the rest of the world.

Over the years, delays in cross border clearance were attributed to duplication of handling procedures on either side of the border, poor institutional arrangement and cargo management systems inadequate physical infrastructures and services and immigration management. The new established OSBP has already addressed some of these challenges. Surveys indicate that since operationalisation of the OSBP early this year, the time to cross from Uganda to Tanzania has reduced by 66% from 10 hours in 2011 to 3.4 hours 27 minutes in June 2017. Whereas, crossing from Tanzania to Uganda has reduced by 90% from 46 hours to 4.5 in June 2017.

Trade Mark East Africa CEO Frank Matsaert said that the completion and operationalisation of the Mutukula OSBP is a crucial milestone in increasing access to markets and the facilitation of the movement of cargo along the Central Corridor.

“When initially investing $12 million with our donors, the United Kingdom and Canada, greater access to markets, increased efficiency that would reduce costs by reducing time and improved infrastructure were just a few of our end goals. Ultimately, our projects in physical infrastructure and automation of key government trade processes like customs, have complemented each other to reduce the cost of doing business and boost trade volumes, increasing both Uganda’s and Tanzania’s overall trade competitiveness. Most importantly, they have contributed to governments being businesses being able to expand thus creating jobs, said Matsaert.

Official data shows that an average of 542 vehicles (310 of those cargo trucks) pass through the Mutukula-Mutukula crossing from Central Corridor into Uganda.