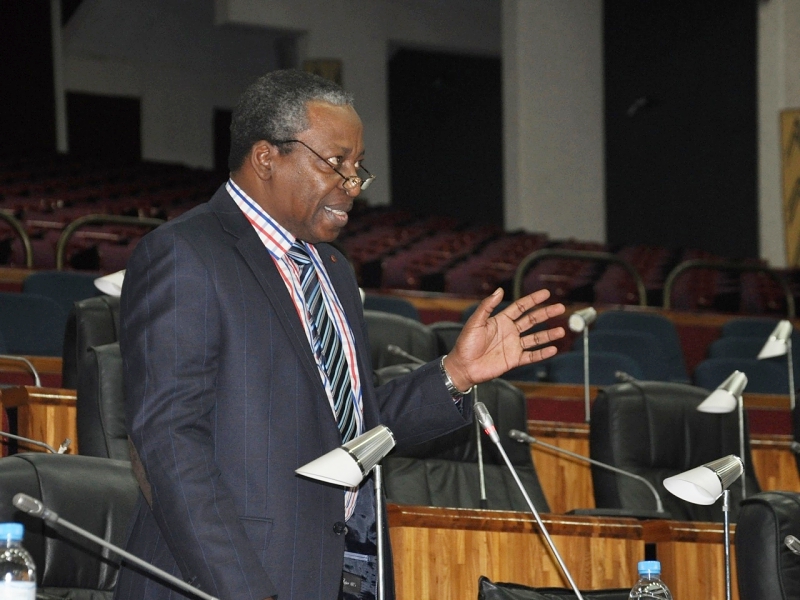 East African Legislative Assembly; Kigali, Rwanda; 10 March 2017:
The regional Assembly is recommending for the improvement of the extensive rail network and penetration in the region. With the construction of the Standard Gauge Railway underway, EALA wants the region to enhance information sharing on the upgrade of the rail network especially that concerning the timelines by Partner States given that the construction is at different levels. In the same regard, Partner States should continue with rehabilitation of the existing railway networks to complement the new ones.

A report of the Committee on Communication, Trade and Investments adopted by the House late yesterday afternoon recommends that Partner States should set aside annual budgets to sustainably fund the implementation of railway projects in the region.

The Committee further recommends that the East African Community should create an EAC infrastructure fund.

The report presented to the House by the Chair of the Committee on Communication, Trade and Investment, Hon. Fred Mukasa Mbidde, follows an oversight activity of the railway infrastructure in the Partner States undertaken on December 12th – 15th, 2016, in the Partner States.  The objectives of the workshop were to: understand the status of the Railways Master plan in the EAC; as well as that of EAC specific Partner States’ Railway Infrastructure development and thereafter come up with recommendations.

The Committee further reviewed the EAC Railways Master Plan identifying a number of issues including high cost of transport making products expensive and international trade uncompetitive.  At the same time, there are low freight volumes, reduced market share for railways.  The Committee takes note of a weak business regulatory environment in the transport and rail sub-sector.  It calls for strategic leadership and review of national policies and laws on the rail as well as enhanced public private partnerships.  The Committee further emphasises the need for development of excellence in railway capacity building, ICT and technology development.

According to the report, a feasibility study for the Isaka - Kigali / Keza - Musonagati Railway Project, was done in March 2009 including the Upgrade of the Dar es salaam - Isaka Railway Line and this would ideally serve the Republic of Burundi.

The preliminary field studies on the Dar es Salaam - Isaka line were also undertaken to determine the requirements for converting the existing meter gauge track to an AREMA-based (North American) standard gauge track and offered suggestions.

Kenya is implementing the railway infrastructure as per the EAC Railways Master Plan.  The country is constructing the Standard Gauge Railway (SGR) projects for Vision 2030, and these include the Mombasa – Malaba route in phase one while phase two includes the Nairobi - Malaba sector.

The use of local content is pegged at 40% of the Civil Works contract with an amount of KShs 81 Billion spent to facilitate supply of cement, sand, aggregates, transport equipment, earthmovers, hygiene and food items, general purpose steels and timber. Similarly included are small contracts such as drainage works, slopes protection, labour contracts as well as clearing and forwarding.

The report states that in order for SGR not to disrupt the operations of the National Park, a number of mitigations are in place.   The SGR according to the report crosses the park on a single line bridge spanning the total width of the Park (6.0 Km) and its average height starts at 8 metres at the entrance into the northern side of the Park and 41 metres at the exit on the southern end of the Park.

In Uganda, the report alludes to the fast tracking of the development of Standard Gauge Railway in order to significantly contribute to transforming the country in to a middle- income status. It is envisaged that a total of 1,724Km will be constructed countywide in phases.

As provided for under Article 91 of the Treaty for the establishment of East African Community, the Partner States agreed to establish and maintain co-ordinated railway services that would efficiently connect the Partner states within the Community and, where necessary, to construct additional railway connections.

During debate, Hon. Ole Nkanae Saoli remarked that the modern train system was going to change the rail road sector in the Republic of Kenya.  “The plan is ahead of schedule by 4 months and this should see the launch done soon.  This is a positive move for the region”, Hon. Ole Nkanae said.

Hon. Susan Nakawuki on her part remarked that ‘good infrastructure was good’ for the region. She however said the cost of transportation was still high therefore hampering the costs of setting up of automotive industry.  She further lamented that the SGR should duly be a regional project and not purely undertaken on singular or bilateral basis.

Hon. Mumbi Ngaru called for strategic political leadership at the EAC saying it was necessary for the integration process to thrive.

Hon. Makongoro Nyerere said it was necessary for the transport sector to target both cargo and passengers in order to be sustainable.  He hailed the EAC Heads of State for the initiatives taken to enhance the railway. “I congratulate President Uhuru Kenyatta of Kenya and President John Pombe Magufuli for been steadfast in enhancing the rail network”, Hon. Nyerere said.

Hon. Valerie Nyirahabineza said the sub-optimal infrastructure in the region had led to increased cost of doing business and said the completion of the SGR would boost business.

The 2nd Deputy Prime Minister and Minister for EAC Affairs, Rt Hon. Dr Kirunda Kivenjija representing the Chair of the Council of Ministers said complementarity was the way to go as opposed to competition among the Partner States to develop the region.