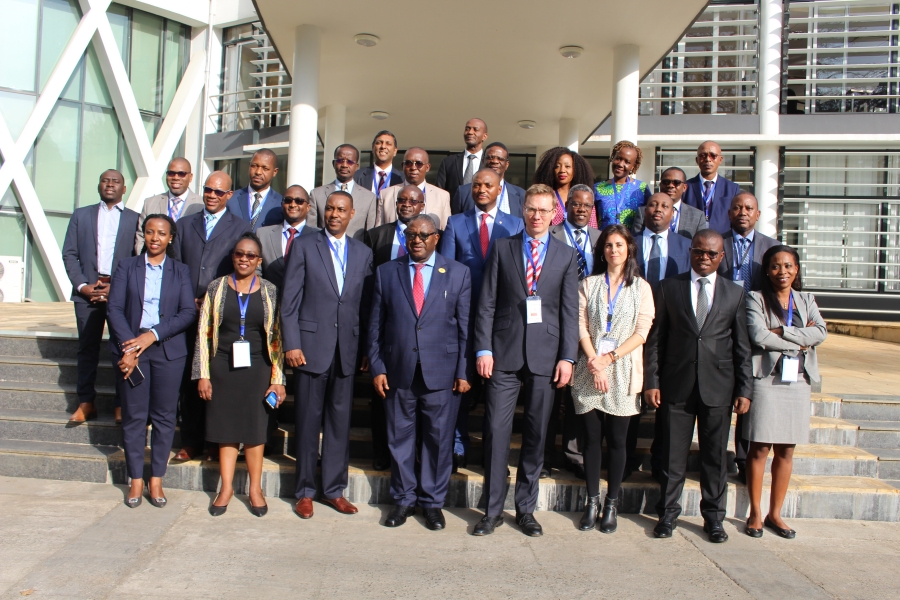 Members agreed to implement recommendations of NEPAD-IPPF’s independent evaluation held in 2019, and also approved operational reforms and the 2020 work program.

EAC Deputy Secretary General in charge of Planning and Infrastructure, Steven Mlote, thanked the Bank for its generous support over the past 20 years which he said had resulted in numerous achievements in various sectors including transport, energy, one stop border posts, ICT and Trans-Boundary Water Projects.

He said the recently completed Arusha-Tengeru dual carriageway and the Arusha by-pass had substantially improved traffic flow in the Arusha region while the counterpart section in Kenya – the Taveta-Mwatate road, has opened up a new and shorter trade and transport route for Rwanda and Burundi from the port of Mombasa.

“Along the Coast of East Africa, the transport corridor from Malindi in Kenya to Bagamoyo in Tanzania is due for upgrading with funds from the Bank. It is gratifying to note that its preparation was funded by the NEPAD-IPPF. This road will close the missing surface transport link between the EAC and SADC regions which traverses Kenya, Tanzania and Mozambique,” he added.

The successes of initial Bank-funded multinational projects between Kenya and Tanzania provided the impetus to widen the geographical spread to other EAC partner states with current projects underway to link Tanzania to the three landlocked states of Rwanda, Burundi and Uganda.

“To date, NEPAD-IPPF has extended support to the EAC to the tune of almost $15 million for road and rail soft infrastructure projects over a period of 13 years,” said Mlote.

Also represented at the meeting were development partners KfW, and the Spanish Ministry of Economy and Business which both acknowledged the pivotal role NEPAD-IPPF continues to play in the infrastructure space on the continent. They equally recognized the need for more resources to enable the fund to achieve more.

Laura González Villarejo representing the Ministry of Economy, Spain said in her statement that Africa is a priority region for Spain. She added that the Spanish Council of Ministers’ long term strategic plan for Africa demonstrated the interest of Spain in Africa.

Michael Andres from KfW, the Oversight Committee Chairman, reiterated the full support of Germany for the Fund. He thanked the NEPAD-IPPF team led by Mike Salawou, Bank Division Manager Infrastructure & Partnerships, for the good performance of the fund during 2019, for a well-organized meeting and the East African Community Secretariat for hosting the event. He emphasized the need for joint effort from all concerned parties including the RECs to seek funding for the facility.

Director of Infrastructure at the African Development Bank, Mr. Amadou Oumarou reaffirmed the institution’s commitment to mobilize more resources for NEPAD-IPPF and highlighted a Euro 3 million contribution received by the facility from the Spanish government in 2019.  Infrastructure development would be more critical as the continent sought to make the African Continental Free Trade Area functional, he said.

“The facility has maintained a sustained drive towards building partnerships and can report on positive co-financing results. Notwithstanding, our efforts to secure more resources will continue through 2020, both from African governments and stakeholders as well as in collaboration with private sector companies and philanthropists,” Oumarou said.

The meeting ended with a visit to the Namanga “One Stop Border Post” between Tanzania-Kenya. This project funded by NEPAD-IPPF, has helped increase trade and tourism and has also stimulated the regional economy within the East African Community.

The African Development Fund (ADF) is the concessional window of the African Development Bank (AfDB) Group. Established in 1972, it became operational in 1974. Administered by the African Development Bank, it comprises, to date, 32 contributing countries and benefits 38 countries. The 38 ADF-eligible countries include those that are increasing their economic capacities and heading toward becoming the new emerging markets—as well as those that remain fragile and need special assistance for basic levels of service delivery. The ADF has the challenge of having nearly half its client countries as fragile states, and facing a situation where even stable economies can become fragile due to a single internal or external shock.

The ADF contributes to poverty reduction and economic and social development in the least developed African countries by providing concessional funding for projects and programs, as well as technical assistance for studies and capacity-building activities. The Fund has cumulatively invested US$45 billion over its 44 years of operationalization on the African continent. The Fund’s resources are replenished every three years by its donor countries.

African Development Bank:
Amba Mpoke-Bigg,
Communication and External Relations Department,
email: This email address is being protected from spambots. You need JavaScript enabled to view it.