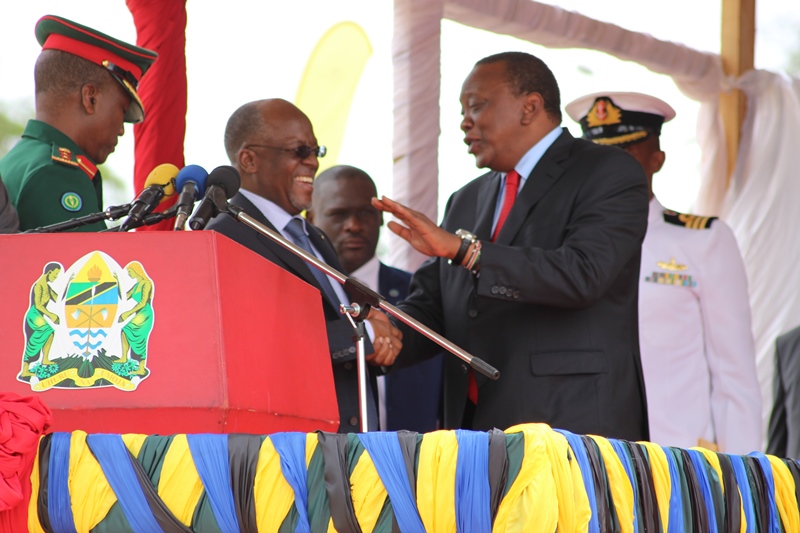 The two Heads of State directed border agencies to facilitate small traders by allowing them to operate freely across the borders instead of using threats to demand bribes from them.

The two Presidents said that it was unkind for border agencies to discriminate against small traders in favour of big entrepreneurs yet the former were the mainstay of the East African economies.

“We as governments are here to facilitate the people of our two countries to do business. We are not in the business of doing business,” said President Kenyatta.

President Kenyatta, however, warned that operating freely across the borders was not a blank cheque for engaging illegal business activities like smuggling, gun-running, drug-trafficking and trading in wildlife parts. He urged business people to obey the law by engaging in lawful business only.

In his remarks, President Magufuli said that one the major obstacles to cross border trade in Africa was the lack of trade facilitation, citing numerous delays at the ports, national borders and checkpoints on the roads.

President Magufuli cited a World Bank report which indicates that lack of trade facilitation increases the costs of doing business in Africa by 75%. This had hindered intra-continental trade in Africa making it lag behind other continents on this parameter.

He said that the EAC had therefore embarked on the construction of 15 One Stop Border Posts (OSBPs) across the region so as to promote intra-regional trade. President Magufuli said that the completion and operationalization of the OSBPs had come with benefits especially for travellers, tourists and traders by reducing the amount of time they spent at the border.

The Tanzanian Head of State said that the OSBPs were supposed to be a catalyst for trade and warned border officials against defeating this purpose by engaging in corruption in the OSBPs.

The Heads of State further called for increased investment and trade between the two countries which they described as made of people who shared a common history, cultures and languages, adding that people from the two countries were therefore not enemies.

“We should break down the borders drawn by our former colonial powers. East Africans are one people,” said President Kenyatta. President Magufuli said Kenya was the third biggest investor in Tanzania after the United Kingdom and South Africa, and called on Tanzanian entrepreneurs as well to invest in Kenya and other EAC countries.

The two presidents thanked the African Development Bank (AfDB) and the Government of Japan through the Japan International Cooperation Agency (JICA) for funding the construction of the Arusha-Namanga-Athi River road.

Speaking at the event, Mr. Gabriel Negatu, the Director General of the AfDB’s Eastern Africa Regional Hub, disclosed that the Bank would finance the construction of the Malindi-Mombasa-Lunga Lunga/Horohoro-Tanga-Bagamoyo Highway at the cost of US$322 million.

The Federal Republic of Germany has also provided support to the EAC Secretariat on the operationalization of the OSBPs in particular through substantial technical cooperation. The German financed “AU Border Programme at the EAC” has supported the EAC Secretariat through GIZ to develop and validate the EAC regional training curriculum on OSBPs aimed at building the technical capacity of border agencies to better manage border crossing points in a more secured, coordinated and efficient manner.

A Training of Trainers on the OSBP regional curriculum was conducted with over three hundred officers at 12 OSBPs trained in the past two years. This year, the programme supported an assessment of the operationalisation of OSBPs and the impact of border management in the regional integration agenda as well as the development of the EAC e-immigration policy.