Tanzania is a country in East Africa within the African Great Lakes region. It borders Uganda to the north; Kenya to the northeast; Comoro Islands at the Indian Ocean to the east; Mozambique and Malawi to the south; Zambia to the southwest; and Rwanda, Burundi, and the Democratic Republic of the Congo to the west. Mount Kilimanjaro, Africa's highest mountain, is in north-eastern Tanzania. Tanzania’s wildlife resources are considered among the finest in the world. Tanzania is the only country, which has allocated more than 25% of its total area for wildlife national parks and protected areas.

Tanzania is the center of African culture because there are four main indigenous language groups spoken on the African continent: Bantu, Kushi, Khoisan and Nailot. Similarly, there are more than 120 ethnic groups with diverse languages, cultures, histories, traditions and customs.

Overview of the cultural landscape

Kenya is located in Eastern Africa, bordering Somalia and Ethiopia in the north, Uganda and South Sudan to the west and Tanzania in the south. The country is situated directly on the equator and contains an abundant and diverse set of wildlife and landscapes. Kenya’s population is also ethnically diverse. Today, there are at least 42 different Kenyan ethnic groups.

Kenya has incredible ethnic diversity. More than half of the country's ethnic groups have Bantu origins. The largest ethnic group in Kenya is the Kikuyu people. Other major ethnic groups include the Luhya, Luo, Kalenjin, Kamba, Kisii and Meru. Each tribe is further divided into clans or sub-tribes, sometimes understood as a family. For example, there are approximately 18 clans in the Luhya tribe. Kenyans tend to associate certain social qualities with different ethnic groups. For instance, the Luo are often seen as being proud of their language and culture. Similar distinctions of social characteristics are made within ethnic groups as well. For example, among the Kikuyu people, those living in Nyeri are commonly seen as industrious or entrepreneurs.

The Republic of Burundi (Kirundi: Republika y’Uburundi; Français: République du Burundi), is a landlocked contry, located in the African Great Lakes region of East Africa, bordered by the Republic of Rwanda to the North, the United Repuvblic of Tanzania to the East and South, and the Democratic Republic of Congo (DRC) to the West. It is also sometimes considered as part of the Central Africa. Burundi has Gitega, located in the central part of Burundi as the Political Capital, while Bujumbura, which is located in the southwestern of the contry, adjacent to the Lake Tanganyika is the Economic Capital.

Burundi is a Presidential Republic, with His Excellency Evariste NDAYISHIMIYE as the Head of State, His Excellency Mr. Prosper BAZOMBAZA as the Vice President, and His Excellency Alain Guillaume BUNYONI as the Prime Minister. Burundi has a Legislature system with the Senate as the upper house and the National Assembly as the lower house of the Parliament. Burundi acceded to his Independence on 01st July, 1962 and became the Republic on 1st July 1966 after the end of the Monarchy.

The languages spoken in Burundi are mostly Kirundi (Mother tongue), French (Official language), English and Kiswahili. The existing Religions are the Christian (Roman Catholic and Protestant), and Muslim.

Credit Cards are used at most of the commercial Banks and some regional banks like CRDB and KCB have their branches in Burundi. The Public Services are from Monday to Friday at 7:30 am to 3:30 pm. Postal Offices are opened from Monday to Friday from 7:30 am to 5:30 pm. Telecommunication Service are available. The most common is ECONETLEO, SMART, ONAMOB and LUMITEL. 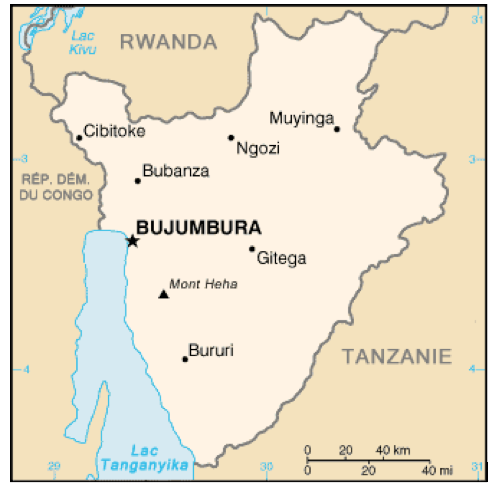 Burundi has an equatorial climate with tropical mountains. The country experiences four main seasons throughout the year. These are:

The Lake Tanganyika is the most popular attraction in Burundi. It is the second oldest freshwater lake in the world, the second largest by volume, and the second deepest, in all cases after Lake Baikal in Siberia. The water flows into the Congo River system and ultimately into the Atlantic Ocean. The Lake Tanganyika offers remarkable biodiversity with more than 1,300 plant and animal species residing there, from microscopic algae to large crocodiles, along with 300 species of small and large fish among which the famous delicious MUKEKE and NDAGALA (type of fish only found in Burundi and Tanzania on Kigoma side). 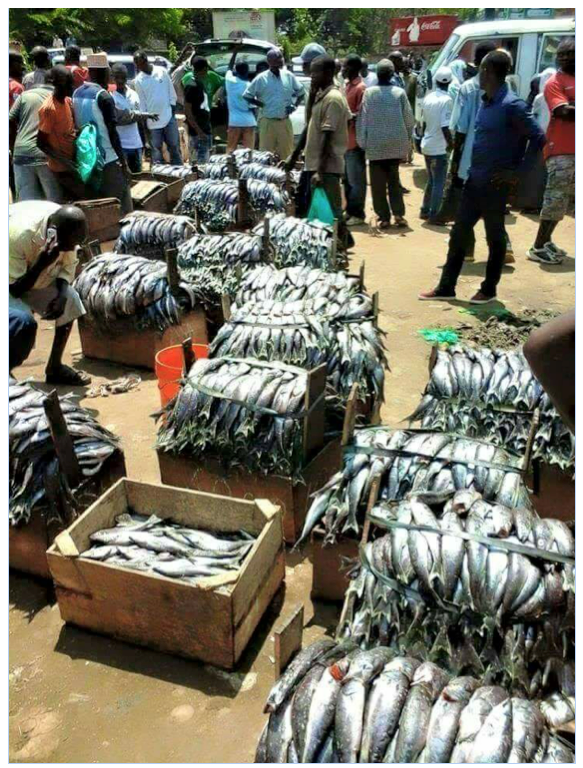 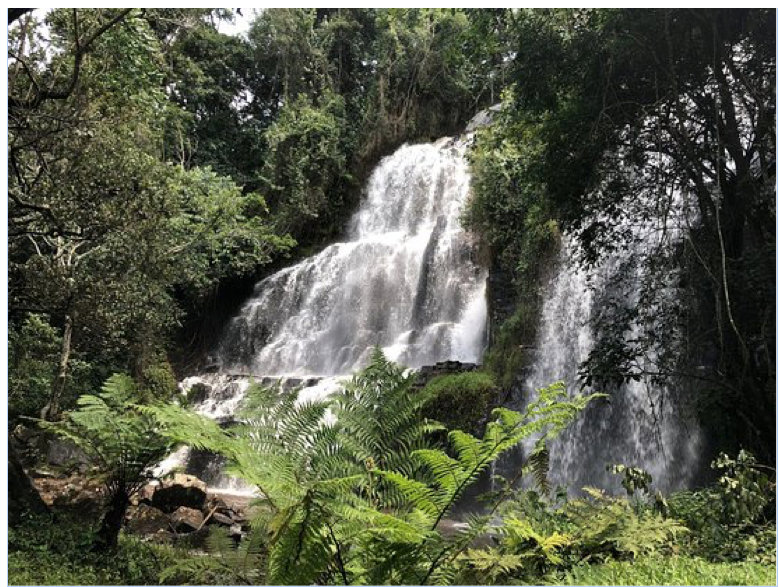 Karera waterfalls are located in the south-eastern region of Burundi- Rutana Province- submerged into a forest gallery which is home to large trees. The falls form a system of waterfalls of a fascinating beauty as you travel through different paths. They are divided into six branches and spread over three levels. 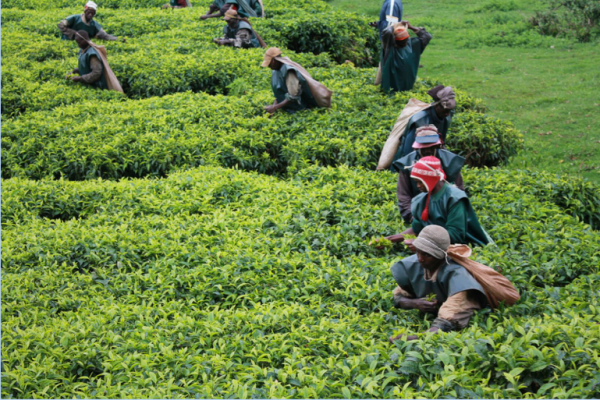 Among the valleys of mountains and thermal springs, the tea plantation of Teza exhibits some of the most beautiful landscape in all of Burundi. The beautiful scenery of nature makes it a worthwhile place for travelers to visit. 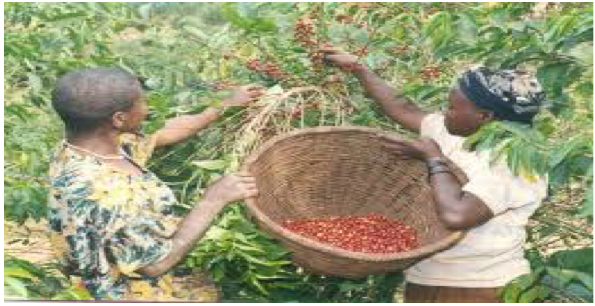 The high altitude, volcanic soils, thousands of hills and plentiful rainfall in Burundi make for the ideal conditions for growing high-quality Arabica coffee. The country’s coffee is grown by local farmers on family-owned micro plantations located in hills (collines).

It is known as among the best ones grown in the Eastern Africa region because its quality is inherent to the hills and mountains where is cultivated at altitudes ranging from 1250 and 2000 meters above sea level. 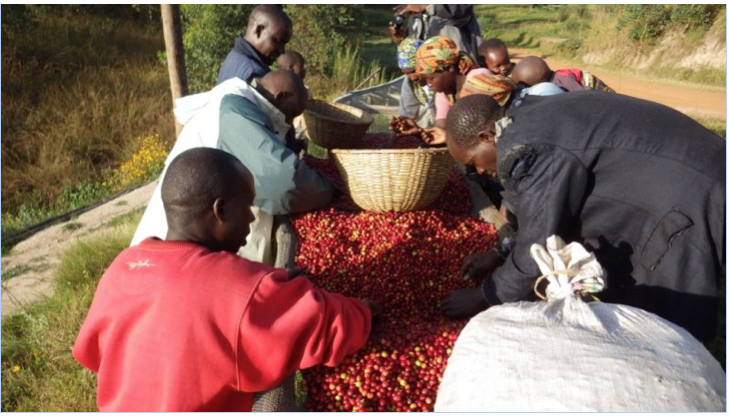 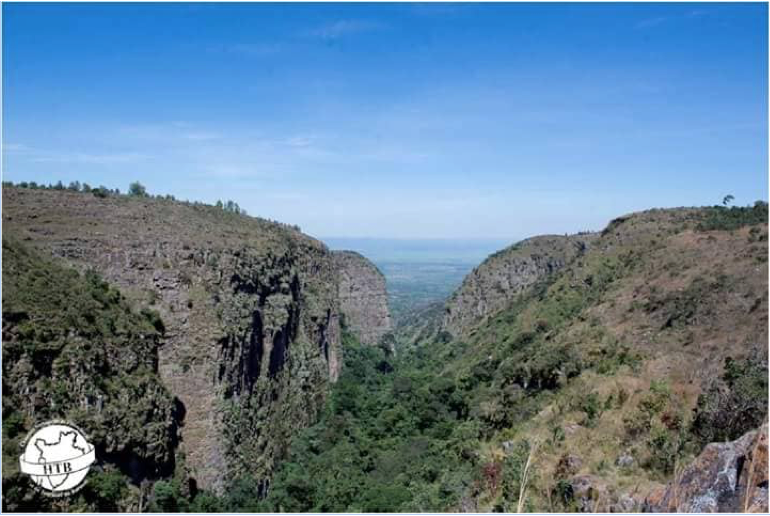 The Nyakazu Break, also called the “Break of the Germans” is an exceptional lookout that oversees the Moso plain. 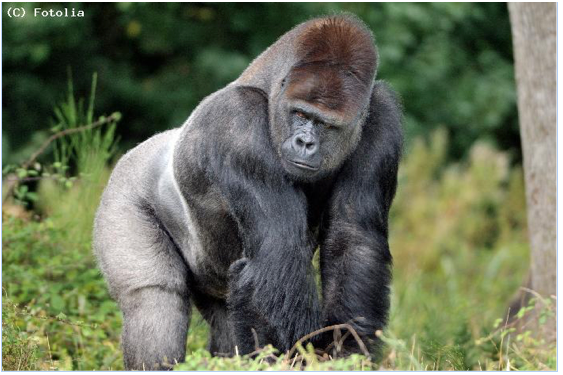 It is a national park in northwestern of Burundi. It covers 400 sq. km and lies atop the mountains of the Congo-Nile Divide. The Kibira National Park is the home of thousands of species of fauna and flora.

Located in the North-East of Burundi, the National Park of Ruvubu is the largest protected ecosystem in the country and lies about 216 km away from Bujumbura. It is the home of some striking flora and fauna. It is this flora and fauna that makes Ruvubu National Park standout among all other Burundi tourist attractions. 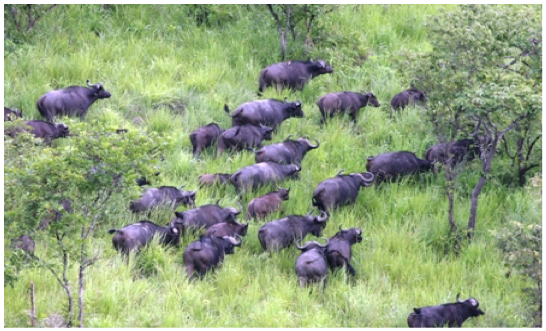 It is located at 15 km north west of Bujumbura capital. Rusizi National Park is divided into two parts; the larger part lies on the eastern bank of Risizi river whereas the smaller part forms the delta of Rusizi at the entrance point of the Lake Tanganyika. Rusizi National Park is thus the home of numerous wildlife species which makes the park a wonderful Burundi tourist destination. 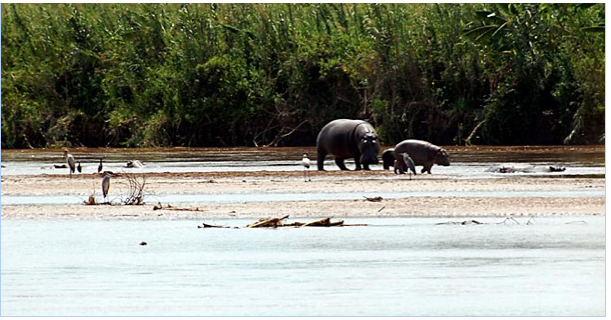 The ritual dance of the royal drums is already placed on UNESCO’s Intangible Cultural Heritage list, which describes it as “a spectacle combining powerful, synchronized drumming with dancing, heroic poetry and traditional songs.

Originally, the Drummers of Burundi accompanied the King on his travels. Today they play at local festivities, national events and are considered to be the most important representatives of the country’s musical tradition.

The drums are made from a tree (Umuvugangoma) that grows only in Burundi, and the Drummers plant the seeds of the trees to maintain their drum-making skills for future generations. 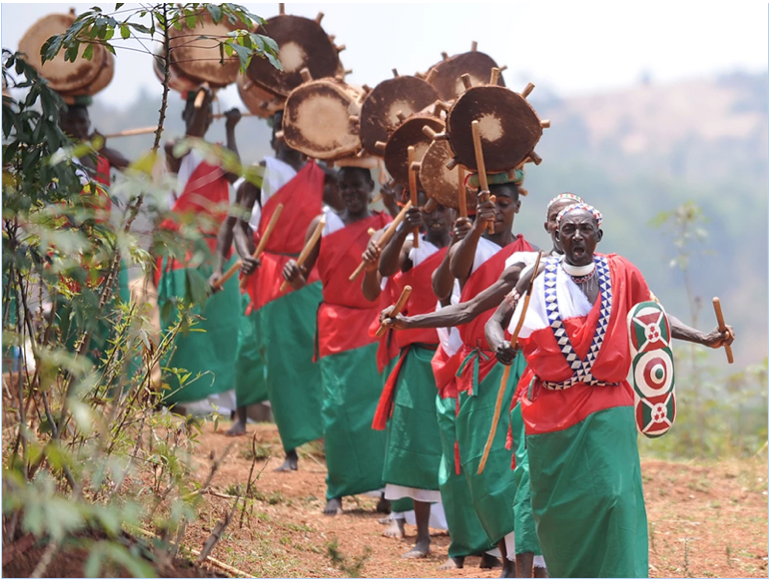 THE SOURCE OF RIVER NILE AND PYRAMYD 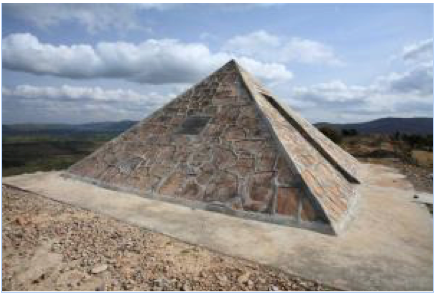 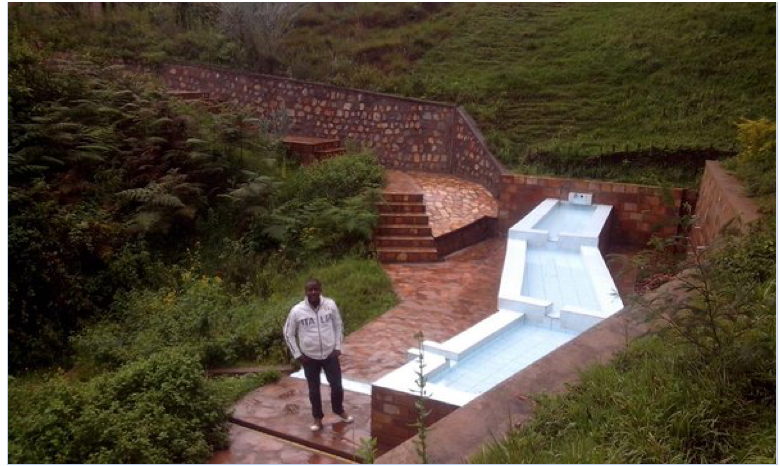 The source of Nile River is located 115km from Bujumbura at the bottom of Kibimbi massif. This source is known as the southernmost source of the sources of the Nile. It is currently viewed as the origin of the Nile. The place is foreshadowed by a signpost and a pyramid located on Mount Gikizi’s slope (2145). The source is below about fifty meters from a car park.

From the commemorative pyramid located some fifty meters above the source, excursions can be organized through nearby hills (Mount Gikizi and Kibimbi).

In the north of Burundi, on the border with Rwanda, a series of eight lakes offer an impressive natural spectacle: Cohoha, Gacamirindi, Gitamo, Kanzigiri, Mwungere, Narungazi, Rweru and Rwihinda, these lakes are part of the watershed of the Nile River. Lake Rwihinda, called "bird lake", is one of these eight lakes. It covers an area of ​​425 ha and is the place of passage and hibernation for migratory birds, about 20 species. These birds come from Europe, arrive on the site in December and return there in April. The lake includes a central islet called (Akagwa) and secondary floating peat islets called (ibishinga), which move in the lake with the wind, constituting a preferred habitat, a place of laying and nesting for certain migratory birds. The ecological richness, specific to this lake, consists of aquatic plants including water lilies, Potamogeton and marsh plants such as papyrus. There are also reptiles such as Dasypeltis scabra, batrachians and specific fish. Beyond the lake is a savannah made up of a few Acacia and Combretum trees.

THE LIVINGSTON AND STANLEY STONE

The “Livingston and Stanley stone” is a stone erected on November 25, 1871 in Mugere, about ten kilometers south of Bujumbura on the eastern shore of Lake Tanganyika. A stone (moved) was erected on the spot to immortalize the meeting between the scientist David Livingstone and the young reporter Henry Morton Stanley, who went looking for him. This meeting took place a few days earlier, on November 10, in Ujiji, in present-day Tanzania. The place marked by the stone is in fact a place where the two explorers were stationed from November 25 to 27, 1871.