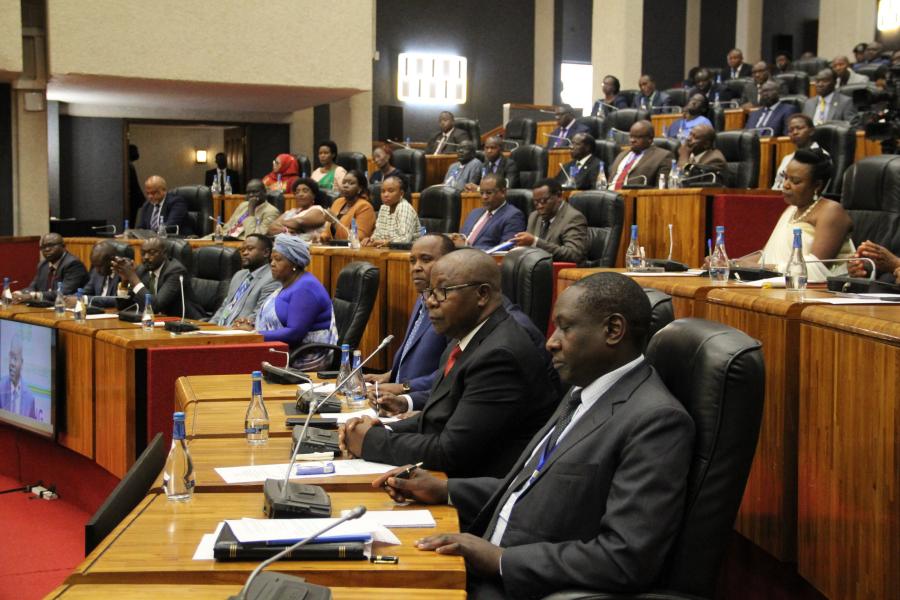 East African Legislative Assembly, Arusha, Tanzania, 6th November, 2022: The East African Legislative Assembly (EALA) First Meeting of the Fifth Session of the Fourth Assembly has come to an end on Friday, 4th November, 2022, at the Parliament of Rwanda Chamber of Deputies in Kigali, Rwanda. The meeting had a robust yet achievable agenda which kept the Members engaged for two weeks.

During its tour of duty in Kigali, the Assembly was graced by the presence of His Excellency, President Paul Kagame, the President of the Republic of Rwanda at a Special Sitting held on Tuesday, 1st November, 2022. The President articulated the need for the EAC Partner States to work together to adopt a sustainable financing mechanism while decrying the current state of underfunding affecting the Community causing a delay in the implementation of projects and programs.

The sentiments on the alternative funding were echoed by Members of EALA during a debate on the Report of the Committee on Accounts on the EAC Audited Financial Statement for the year ended 30th June, 2020.  They urged the EAC Council of Ministers to actualize this alternative funding mechanism and to take full control of the development programmes that will steer the Community to full realization of its integration agenda.

While encouraging the Community to fast track the implementation of goals set out to attain the four pillars of integration, His Excellency the President singled out the establishment of the East African Monetary Institute which is years behind schedule.

In response to this call, the EALA moved swiftly to pass EAC Surveillance, Compliance and Enforcement Commission Bill, 2022.

It is worth noting that this Commission will among other things, promote the attainment of the macroeconomic convergence criteria for all Partner States during the transition to the Monetary Union.  The attainment of a single currency for the Community is not a mirage but a reality that the Assembly will ensure is realized.

The EAC Supplementary Appropriation Bill, 2022, is yet another Bill which was passed by EALA during the Kigali plenary session. The Bill grants the Secretary General of the EAC the authority to appropriate a sum of United States Dollars two million, six hundred and twenty thousand, eight hundred out of the budget of the Community to meet additional expenditure for the Organs of the Community for the financial year ending 30th June, 2023.

In compliance to its statutory role of ensuring accountability in expenditure of the Community’s resources, the EALA has continuously scrutinised the Audited Financial Reports of the Community. During this plenary the Assembly scrutinized, debated and adopted the Report of the Accounts Committee on “The Audited EAC Financial Statements for the Financial Year ended 30th June, 2020,” Report of the Committee on Legal, Rules and Privileges on “Assessment of the Status of Ratifications and Implementation of EAC Protocols. This report gave an overview on the status of the EAC Protocols and laws that have so far been ratified by Partner States and gave recommendations on the same.

The 18th Ordinary Summit, of the EAC Heads of State held on 20th May, 2017, declared EAC a Common Higher Education Area in order to harmonise and enhance the quality of education in the region. It is on this account that the Committee on General Purpose undertook an oversight Activity to assess the Progress made by the Inter-University Council of East Africa in the Harmonization of Education Systems in EAC.”

This harmonization will definitely improve the free movement of human resource in our EAC Partner States by recognizing academic qualifications of all professionals educated in the EAC region.

The Assembly adopted a Motion to support the ongoing East African Crude Oil Pipeline Project (EACOP). The Motion was moved by Honourable James Kakooza. Through this Motion, the august House sought to express its support for the implementation of the EACOP project which is intended to benefit the Partner States. It also encourages any aggrieved persons or communities by the EACOP project to always channel their complaints to their legitimate representatives in the National Assemblies or petition the EALA.

The Assembly concluded its sittings by adopting the Report of the Committee on Regional Affairs and Conflict Resolutions on “Assessing the Measures instituted by the Partner States for the Safety and Security of Movement of People and Goods on Lake Victoria and Lake Tanganyika.”

In the report, the Committee observed that among other issues, there were existing gaps such as absence of updated navigation charts, rescue services on a 24-hour basis and a comprehensive maritime security strategy that needs to be addressed to enhance effective communication and minimize accidents on Lakes Victoria and Tanganyika.

Members of EALA took time to enjoy the serene clean environment of Kigali City, which was in 2018 referred to as the cleanest city on the planet by the UN Environment Program Head, Eric Solheim, both in terms of lack of street rubbish and green initiatives. They also had the privilege of witnessing the Umuganda Initiative that is carried out by the local communities in an effort to clean the City of Kigali.

At the close of the plenary session, the Speaker of EALA, Rt. Hon. NGOGA K. Martin thanked His Excellency, President Paul Kagame, President of the Republic of Rwanda, for taking time, out of his busy schedule, to address Members of the EALA during their sitting in Kigali.