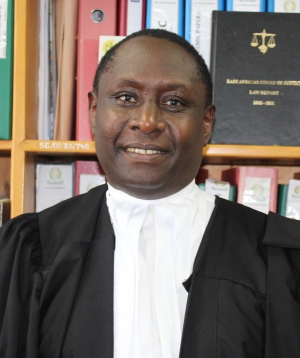 Prior to his current appointment he worked as a Principal Legal Officer with the EAC from July 2008; was a lecturer at Makerere University at the Faculty of Law and also served as Senior State Attorney in the Ministry of Justice in Kampala, Uganda.

His current work schedules as the principal legal advisor to the Community pursuant to Article 69 of the Treaty for the Establishment of the East African Community (Treaty), involves pursuing legal protection of the Community’s interests at the East African Court of Justice and in Partner States’ Courts of law. He renders legal advice and facilitates the formulation and interpretation of laws for all the organs and institutions of the East African Community. Besides providing legal advice, he facilitates policy organ meetings and conducts legal research on international and national laws on matters relevant to the Community. Consistent with the foregoing, he also performs such other duties as are conferred upon him by the Treaty and the Council of Ministers.