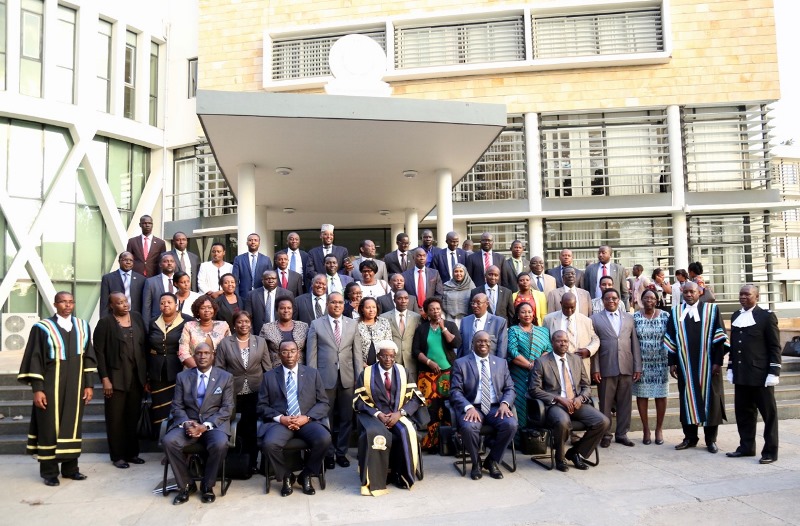 Rt Hon Martin Ngoga was yesterday elected Speaker of EALA. Rt Hon Ngoga polled 33 votes in the second round of voting against Hon Leontine Nzeyimana of Burundi who amassed 3 votes. Hon Adam Kimbisa of the United Republic of Tanzania did not receive any votes.

The election which took place at the EALA Chambers was presided over by the Clerk to the Assembly, Mr Kenneth Madete.

In the first round of voting, Hon Ngoga got 35 votes while only one vote was cast in favour of Hon Nzeyimana who was absent. In accordance with the Rules of Procedure, a second round of voting was called since no candidate had amassed the requisite two-thirds of the votes cast (36 out of 54). The fourth Assembly comprises of 54 lawmakers – with nine from each of the six Partner States.

The Rules of Procedure state that a candidate for Speaker should get a two-thirds majority to be a clear winner. In absence of the same, a further ballot (second round) shall be held.  A candidate who receives the highest number of votes shall then be declared the winner. In the second round, Rt Hon Ngoga managed 33 votes to be declared the winner.

The new Speaker immediately took a reconciliatory tone and rallied for unity and teamwork.

“I salute my worthy competitors in the race and ask that we work together for the benefit of EALA and the region. I wish to extend my arm of collaboration and co-operation”, Rt Hon Ngoga said.

The Speaker pledged to work tirelessly to ensure the Assembly realizes its mandate.

“I can only assure you Hon Members that I will provide the leadership you deserve in order to perform our statutory functions with which we are tasked to take our integration process to another level”, Rt Hon Ngoga said. “I will spare no efforts to provide the leadership you need to maintain high moral standing for us to confidently exercise oversight to other Institutions of the Community”, he added.

The occasion yesterday was attended by the President of the Senate of Rwanda, Rt Hon Bernard Makuza, Speaker of the Transitional National Legislative Assembly of South Sudan, Rt Hon Anthony Makana and several Members of Parliament and Senators from the Republic of Kenya.

Prior to his election, Rt Hon Ngoga served in the 3rd Assembly.   He was previously Prosecutor General in Republic of Rwanda.  In May this year, Rt Hon Ngoga added another feather to the cap when he was elected and confirmed by the congress of the global football body as deputy Chairman of the FIFA Ethics Committee in charge of investigatory chamber for a four-year term. The independent Ethics Committee is one of FIFA's judicial bodies primarily responsible for investigating possible infringements of the FIFA Code of Ethics.

The elections were finally done after lengthy debate.  The House passed a Motion moved by Hon Mukasa Mbidde that the election be held strictly under Rule 6 of the Rules of Procedure of the Assembly and that no rule exogenous to the same would be used.

He stated had earlier stated the election ought to be conducted strictly under Article 53 (1) of the Treaty.  He remarked that the election of Speaker would be carried out by Members in their individual capacities given that before that is done, the House is not fully constituted.

EALA is an Organ of the East African Community established in 2001 with a mandate of legislation, representation and oversight. Rt Hon Ngoga takes over from Rt Hon Daniel F. Kidega whose tenure ended on June 4th, 2017.