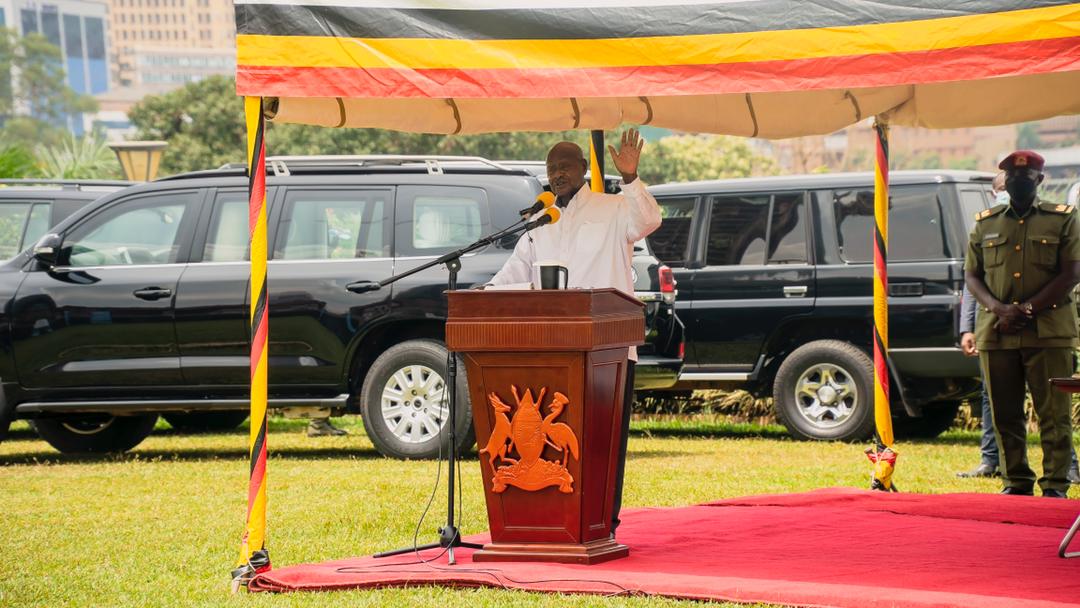 President Museveni singled out universal education and a business mindset as the factors that will stimulate rapid economic transformation within the East African Community (EAC) and the rest of the African continent.

President Museveni said that universal education from public primary and secondary schools through to state technical and vocational training institutions was the key to equipping the youth with the appropriate skill-sets for job creation and enterprise.

On business, President Museveni urged East Africans to develop a culture of producing goods and services for sale with the consciousness of maximizing profits and minimizing costs, adding that this would transform the region from a net importer to a key export of goods and services.

The Head of State said that the region must undergo socio-economic transformation through universal education and full monetization of the economy if it was to make full use of its vast human and natural resources.

President Museveni said that the low levels of the Gross Domestic Product in Africa was evidence of the low level of existing resources and urged African intellectuals to come up with local solutions for local problems as opposed to seeking well paying jobs and consultancies.

“Our economics professors should diagnose our problems and recommend solutions. The national market in our countries is not enough and we need to decide whether or not we want to be like Latin America which has lots of resources but is disorganized economically and politically,” said the Head of State.

“Integration is meant to give our business people access to bigger markets within the region and beyond. We are integrating in order to bring prosperity through increased production of goods and services” he added. 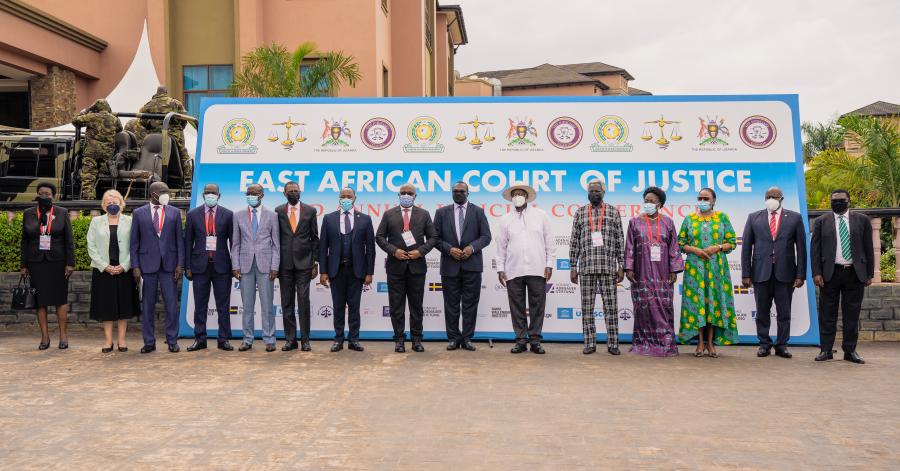 President Museveni was speaking in Kampala when he officially presided over closing ceremony of the 2nd Annual East African Court of Justice (EACJ) Judicial Conference that was held from 26th – 28th October, 2022 in the Ugandan capital.

The President said that the security challenges facing the EAC could be easily solved if the Partner States and the African Union developed and integrated approach to tackling insecurity, adding that lack of coordination and synchronized thinking was hurting Africa.

Saying that the law and jurisprudence will prosper once African society is transformed, President Museveni said that regional integration could backfire if it is mishandled. He challenged judicial officers in national and regional judiciaries to distinguish what issues should be handled at the regional level and which ones should be left for the national and lower levels in the Partner States.

The President said that he personally believes that issues of land should not be handled at the regional level but at the national and even lower levels such as districts and counties.

On his part, the Chief Justice of Uganda, Justice Alfonse Chigamoyi Owiny-Dollo, urged leaders in the region to ensure that there are robust and efficient judiciaries at the national and regional level to sustain the rule of law in East Africa.

Justice Owiny-Dollo called for the strengthening of the EACJ so that it can effectively exercise its mandate of interpreting the Treaty for the Establishment of the EAC and ensure that justice prevails in the region. 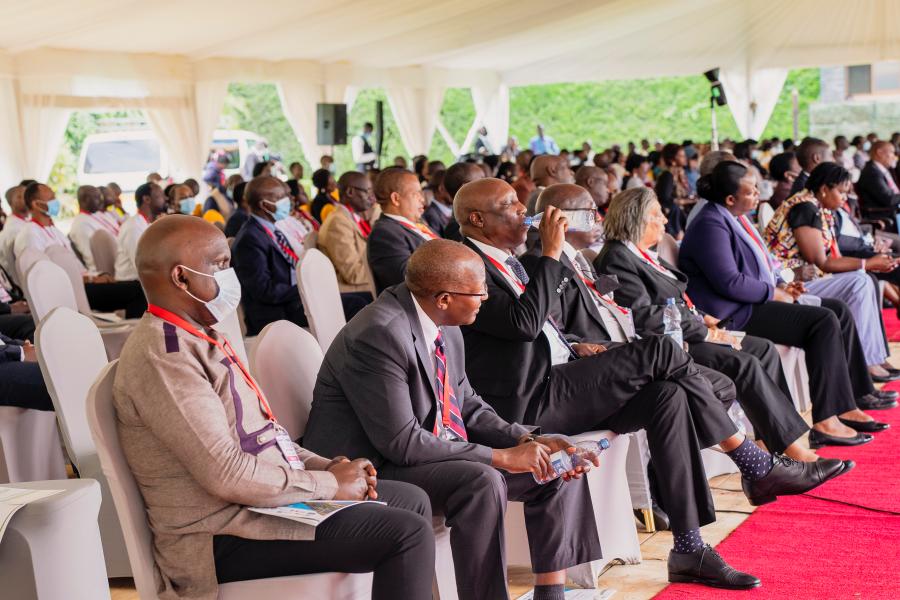 Speaking at the ceremony, Uganda’s First Deputy Prime Minister and Minister for EAC Affairs, Hon. Rebecca Kadaga, hailed the decision by the Summit of EAC Heads of State to expand the mandate of the EAJC to arbitrate on issues surrounding the EAC Customs Union and Common Market protocols, which she described as the core of the integration process in the region.

Hon. Kadaga urged Partner States to address the issue of protectionism of certain professions at national level to ensure the free movement of services as enshrined in the Common Market Protocol. 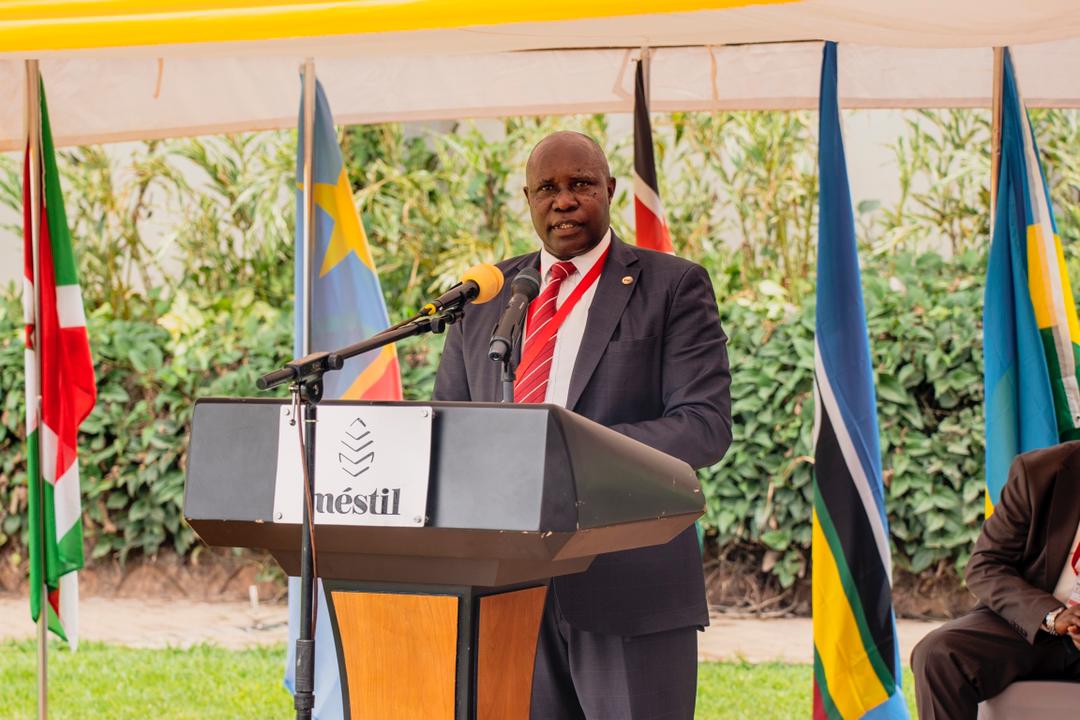 The Judge President of the East African Court of Justice, Justice Nestor Kayobera, urged the EAC Council of Ministers and the East African Legislative Assembly to expedite the passage of a Bill to grant administrative and financial autonomy to the regional court as had been directed the Summit of EAC Heads of State.

Justice Kayobera further called for enhancement of the budget of the Court to enable it deliver justice efficiently to EAC Citizens. 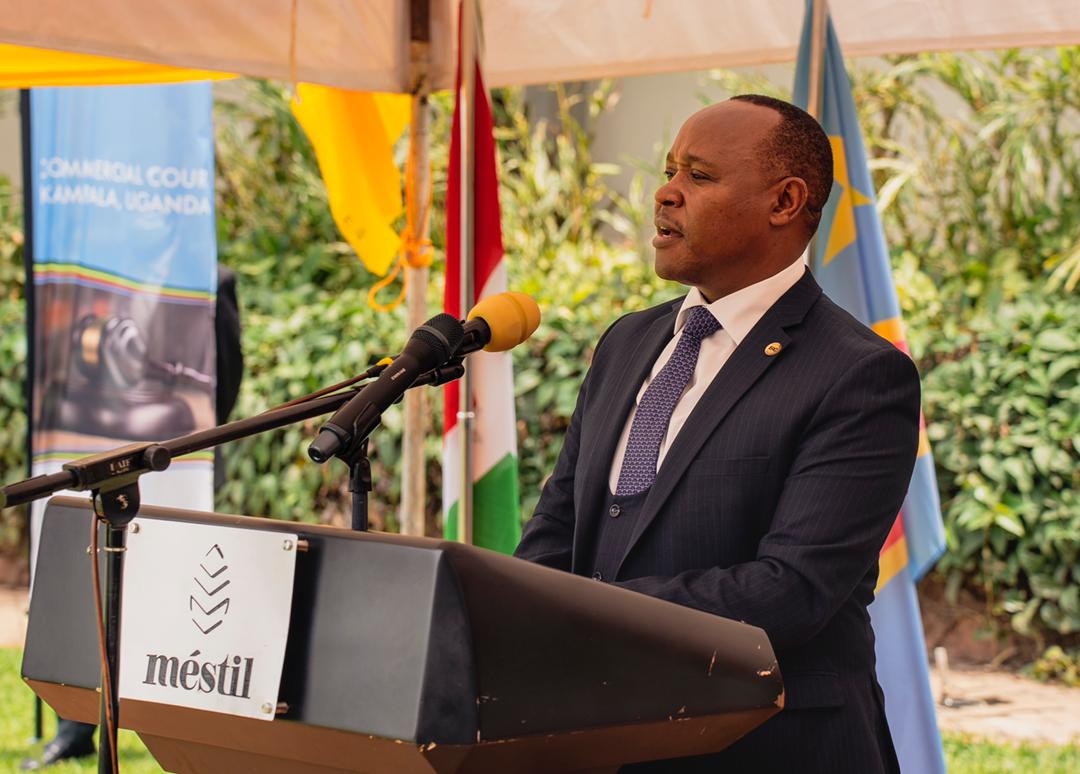 In his remarks, EAC Secretary General Hon. (Dr.) Peter Mathuki, said that the rotational annual EACJ Judicial Conferences was in line with previous directives of the Summit to take the Community to the people at the grassroots who are the actual owners of the integration process.

Dr. Mathuki further said that the Secretariat will work closely with the Council of Ministers and the East African Legislative Assembly to expedite the passage of a Bill that would grant administrative and financial autonomy to the EACJ, adding that this would guarantee the independence of the regional court as it executes its mandate of interpreting the Treaty.

Also present at the function were: the Chief Justices from the EAC Partner States; Uganda’s Minister for Justice, Hon. Robert Mao; the Chairperson of the Council of Ministers and Burundi’s Minister for EAC Affairs, Hon. Ezechiel Nibigira; Amb. Jean Beagle, Director General of the International Law Development Organisation; Judges from the EACJ and national courts; senior judicial officers; legal scholars; members of the diplomatic community; development partners, and staff from the EAC Organs and Institutions.

The overall objective of the 2nd Annual EACJ Judicial Conference was to stimulate high-level conversations and discussions on emerging legal and judicial issues including, emerging jurisprudence, issues affecting Courts and Court users and provide a platform for information sharing among judges, judicial officers and legal practitioners and other Court users in the region.

A keynote address on “Shaping East Africa Through Advancing Access to Justice” was delivered by Prof. Frederick Ssempembwa, and formed the basis for the Panel Discussion of the Chief Justices from the EAC Partner States.

The 2nd Annual EACJ Judicial Conference drew participants from the seven (7) East African Community (EAC) Partner States who shall include Chief Justices, Ministers of Justice, Attorneys General, Ministers in charge of EAC Affairs, Judges from regional and national courts, Heads of EAC Organs and Institutions, Members of Parliament, legal practitioners, members of the academia, representatives of civil society organisations, representatives of the private sector and the media.

During the 2nd Judicial Conference, a number of topics were discussed, namely:

To mark the 20th Anniversary of the EACJ, the Court in 2021 launched the rotation of its November Court Sessions, with the 1st rotational session being held in Bujumbura, Burundi from 8th - 26th November, 2021.

The objective of rotating the Court’s November sessions is to bring the services of the Court closer to the people and to enhance the visibility of the Court as it undertakes its mandate of promoting access to justice by ensuring adherence to law in the interpretation and application and of compliance with the EAC Treaty. The Court through its mandate continues to settle disputes and develop key jurisprudence on matters of regional integration.

The East African Court of Justice (EACJ or ‘the Court’) is one of the Organs of the East African Community established under Article 9 of the Treaty for the Establishment of the East African Community. Established in November 2001, the Court’s major responsibility is to ensure the adherence to law in the interpretation and application of and compliance with the EAC Treaty.  Arusha is the temporary seat of the Court until the Summit determines its permanent seat. The Court’s sub-registries are located in the respective National Courts in the Partner States.