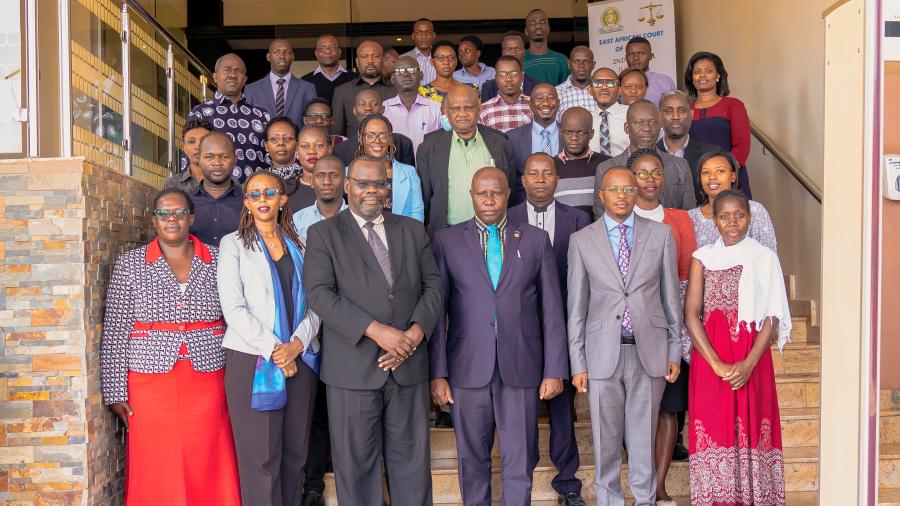 Justice Kayobera said that granting the Court administrative and financial would uphold the independence of the regional judicial body as it arbitrates in civil disputes and delivery of justice.

The Judge President said that the much-needed autonomy would place the regional court at par with its counterparts in the Partner States where national judiciaries enjoy financial and administrative autonomy from the executive.

Justice Kayobera also urged Partner States to allow the EACJ judges to be resident in Arusha as opposed to the current situation where only the Judge President and the Principal Judge are in Arusha on a permanent basis, adding that this would enable the Court to handle more cases and thereby reduce the heavy caseload.

The Judge President was speaking when he officially opened a one-day Regional Media Training for Editors and Reporters on the EACJ in Kampala, Uganda. The purpose of the training is to build the capacity of the media in reporting on the work of the EACJ so that they can educate EAC citizens on the work of the Court, its mandate and role in the integration process.

The media training is a precursor to the 2nd Annual EACJ Judicial Conference scheduled for 26th- 28th October 2022 in Kampala. The theme of the four-day conference is “Transforming Access to Justice in the East African Community.”

Justice Kayobera said that the EACJ recognises the critical role of the media in disseminating and reporting on the role of the Court, and its contribution to the EAC integration agenda

“On this basis, the Court organised this media training for the 2nd Annual EACJ Judicial Symposium to equip journalists and editors in the region with adequate knowledge and information on the role of the Court and its contribution to the EAC Integration agenda,” he added.

Justice Kayobera disclosed that the Court would hold its sittings in Kampala from 2nd November to 2nd December, 2022 as part of efforts at bringing the Court closer to the people of East Africa, adding that it would also render judgments in various cases before it.

The Judge President said that the Court had been established to ensure adherence to the Fundamental Principles of the Community as enshrined in Article 6 of the Treaty for Establishment of the EAC.

“Among the fundamental principles that governs the achievement of the objectives of the Community, include adherence to good governance which encompass the rule of law, transparency, accountability, democracy, respect and promotion and protection of human rights,” said Justice Kayobera.

The head of the regional judicial organ said that his 7-year tenure as Judge President would be guided by the three principles, namely: teamwork; good faith and judicial diplomacy.

Justice Kayobera said that through teamwork and good faith, the Court would achieve more while executing its mandate while judicial diplomacy would ensure that the Court has a human face even as it administers justice.

In her remarks, the Deputy Registrar of the EACJ, Her Worship (Ms.) Christine Mutimura, said that most East Africans do not understand the work of the Court, its mandate and role in regional integration.

Ms. Mutimura said that, for instance, small traders at the EAC border posts have had their rights breached by border officials and agencies yet they have no recourse to justice, adding that the regional court was set up to address such gaps.

Ms. Mutimura said that EACJ would not work in silos but would engage all stakeholders as it delivers on its mandate as stated in Chapter 8 of the EAC Treaty.

The Deputy Registrar said that Court was not a toothless court noting that Partner States were implementing its decisions.

She said that the EACJ was the first court in the region to go online when the Covid-19 pandemic struck and attributed this achievement to the Court’s case management system that had been in place for a while, adding that litigants do not have to travel to Arusha to listen to their cases.

On his part, the President of the East African Law Society (EALS), Mr. Bernard Oundo, emphasised the importance of engaging the media saying that journalists have key role to play in raising awareness on the role of the regional court and the integration process in East Africa.

Mr. Oundo said that the integration process would not move forward unless the media in the region was empowered on what the process entails.