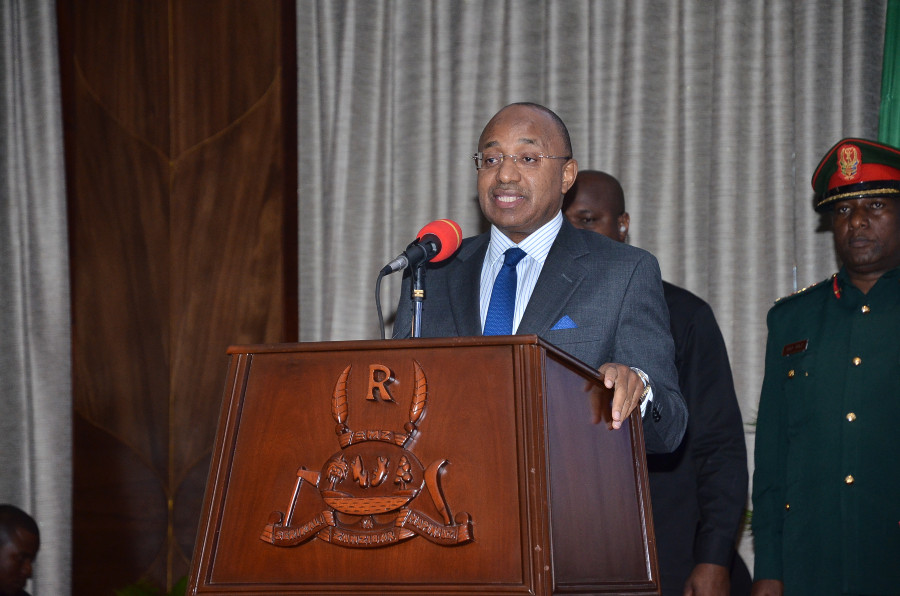 East African Court of Justice, 28th June 2022; The President of Revolutionary Government of Zanzibar H.E Dr. Hussein Ali Mwinyi urged Judges from a continental and regional Courts in Africa to be inspired by vision which is the most important ingredient that Africa requires in promoting access to justice. The very critical human rights to development cannot be achieved without justice.

“The Rulings that you make today will determine the fates of future generations of Africans on issues as diverse as health, economics, sociology, politics and even religion, only vision can guide Courts as yours in responding to such demands given that you deal with legal rules that are international in nature, but seek to respond to questions that are ultimately for national implementation.” said H.E Dr. Mwinyi

This was during the official opening of a three-days first Tripartite Judicial Dialogue held in Zanzibar, which was organized by the three Courts, that is the African Court of Human and Peoples' Rights, the East African Court of Justice and ECOWAS Community Court in collaboration with various Partners led by the Roul Wallenberg Institute of Human Rights and Humanitarian Law.

Making his key note address, President Mwinyi said that the objectives of the judicial dialogue is to enhance the promotion and protection of human and peoples' rights through effective collaboration between the continental and regional Courts and encouraging exchange on judicial issues as well as best practices and to make recommendations to the common challenges faced by the 3 Courts in protection of human rights.

"Let me share the sentiments and expectations of ordinary citizens about the manner which judges and Courts should discharge their duties. The most relevant maximum in this respect, is that justice must be done but it must also be seen to be done" stated President Mwinyi

Dr. Mwinyi further told the participants at the Tripartite Judicial Dialogue that, given that the ordinary citizens are not privy to the internal functioning of the Courts, they are only left with their perception about how justice is rendered. This dialogue therefore will gain relevance if its helps reinforce the capacity of your courts to deliver decisions that are of the best quality as inspired by the facts of the cases, Applicable law among other factors.

On his part, Hon. Justice Nestor Kayobera, President of East African Court of Justice said that EACJ despite not having explicit human rights jurisdiction, the Court has built jurisprudence on the protection of rights of individuals in East African Community under Articles 6 (d) & 7 (2) of the EAC Treaty on fundamental and operational principles of the Community, which include protection of human rights and freedoms.

He added that the Court has handled over 600 cases which are not enough due to limited awareness on the Court by the public.

Hon. Her Excellency Lady Justice Imani D. Aboud, President of the African Court of Human and Peoples' Rights said that Judicial Dialogue has become a critical tool to achieve justice in an increasingly globalized world, the purpose and gains are now established and undeniable.

Justice Imani stated that recent developments in Africa's social - political and legal landscape unequivocally demand that African Leaders reaffirm their commitments to Justice, whether to terrorism, armed conflicts, famine, political violence, under development or poverty, justice continue to stand as the agreed solution. "We as Judges and Courts need to engage in consistent trading of legal and judicial solutions." said African Court President

The ECOWAS Court President represented by Hon Lady Justice Dupe Atoki said that, the Court was initially strictly an interstate Court without individual's direct access to the Court. However, in 2005, a Supplementary Protocol was adopted which amended the initial Protocol on the Court, expanding its initial mandate into four distinct mandates and these include; as Community Court; an Administrative Tribunal for ECOWAS Public Servants Human Rights Court and an Arbitration Tribunal.

Justice Dupe added that it's significant to note that the said Supplementary Protocol granted the Court’s jurisdiction to determine cases of violation of human rights that occur in any Member State and gave individuals direct access to the Court in respect of human rights violations.

The Roul Wallenberg Institute of Human Rights and Humanitarian Law a leading partner in organizing the dialogue, represented by Prof. Morten Kjaerum said that, the development of the mandates of both the regional and sub-regional courts in Africa, has not only contributed to the advancement of human rights in Africa but also to the harmonization of human rights standards in the region and for the unity and effectiveness of the African human rights system. The jurisprudence developed at this continent contributes greatly to the advancement of international law at all continents.

Konrad Adnauer Stiftung a partner represented by Dr. Stefanie Rothenberger said " We don't have to go back far in time, if we want to see how essential the role of the Courts with regard to guaranteeing the fundamental rights of access to Justice for African citizens is."

The judicial dialogue which commenced on 27th will go on up-to 29th June. Various discussions on judicial issues on promoting and protection of human rights, adjudication, jurisprudential issues related to women rights and indigenous people, execution of decisions of the three courts, challenges and prospects of cooperation in the implementation of the decisions as well as Institutional cooperation among these Courts.

The dialogue brought together judges from the three Courts, legal and academic professionals, Registrars and Staff of the 3 Courts. Other dignitaries in attendance were the Chief Justice of Zanzibar (designated), Minister of Justice, Attorney General, Regional Commissioner, Judges of the High Court of Zanzibar among others.