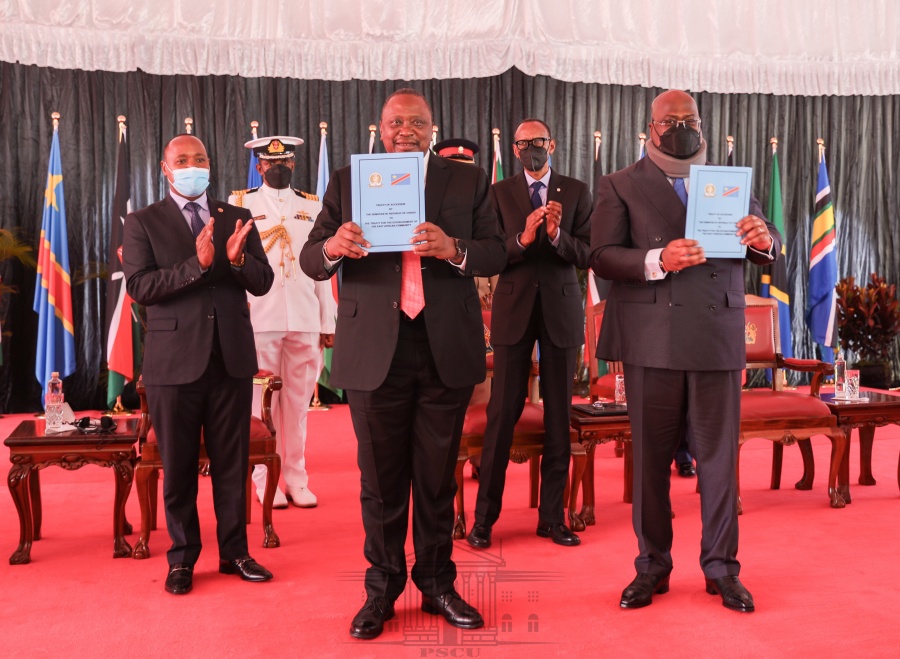 The Chairperson of the Summit of EAC Heads of State, H.E. President Uhuru Kenyatta, signed the Treaty of Accession with the President of DRC, H.E. Félix-Antoine Tshisekedi Tshilombo, at State House, Nairobi.

Also present at the ceremony were Ugandan President Yoweri Museveni and his Rwandan counterpart Paul Kagame.

DRC now has up to 29th September, 2022 to undertake internal and constitutional processes to ratify the Treaty and deposit the instruments of ratification with the Secretary General.

President Kenyatta said that the signing of the Treaty of Accession marks the formal entry of DRC into the EAC after satisfying all the conditions under Articles 3 and 4 of the Treaty for the establishment of the EAC.

“To get to this point, it has taken strong leadership, commitment to the ideals of the EAC integration agenda and a clear understanding of the shared benefits that come with working together,” said President Kenyatta.

President Kenyatta said that the region has already began realising the promise of the EAC including the free movement of people, goods and services across the Community that has boosted trade and strengthened people-to-people ties thereby enabling East Africans to harness the comparative strength of each member state for the benefit of all and to confront and solve problems together.

“The accession of DRC as a member state of EAC will even more elevate these gains and strengthen our economic muscles and competitiveness in the continent and globally,” said the Chairperson of the Summit.

“We welcome DRC to the Customs Union and Common Market which are the signature pillars of our Community and the foundation upon which our social, political, trade, investment and economic interests stand,” added President Kenyatta. 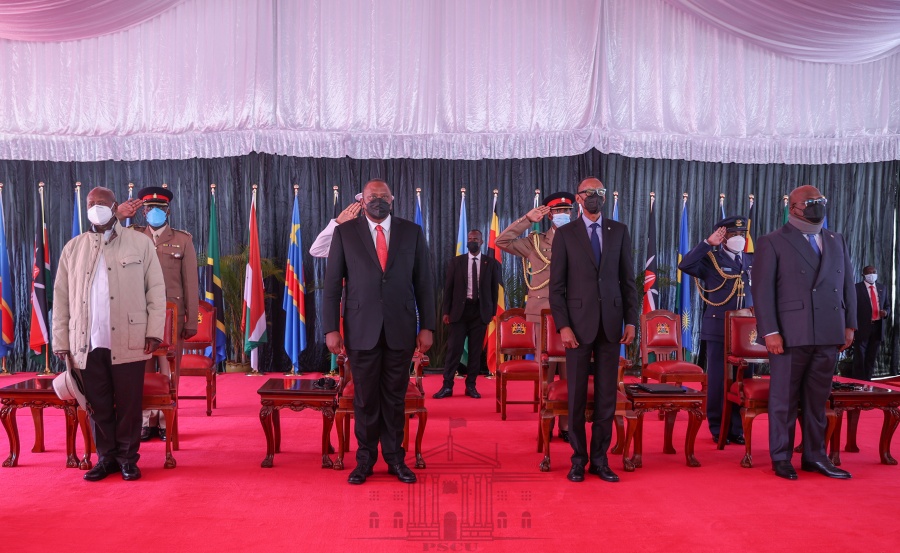 Speaking at the event, President Tshisekedi said that the signing of the Treaty had concretised the commitments made by DRC during her admission into the Community by the Summit of EAC Heads of State during their 19th Extra-Ordinary Meeting held on 29th March, 2022, adding that the move would lead to the consolidation of economic benefits to the peoples of DRC and EAC.

President Tshisekedi said that DRC’s membership to the Community would facilitate the optimising of agro-economic benefits of bloc, adding that the region’s demographic and geostrategic positions offer several comparative advantages.

The DRC President reaffirmed his country’s readiness to play its role in the Community to make it stronger and more prosperous.

President Tshisekedi reiterated his earlier call to the Summit for the establishment of a new EAC institution that would ensure the sustainable exploitation of the region’s vast natural resources in addition to mitigating the effects of climate change.

President Kenyatta disclosed that Ministers of EAC Affairs and technical experts would move with speed to integrate DRC into the Organs of the Community such as the East African Court of Justice, East African Legislative Assembly and Sectoral Committees on essential matters including trade, industry, finance, agriculture, infrastructure, science and technology, defence, security, education and international cooperation, among other areas.

The Summit Chairperson further said that there was a mechanism for the speedy integration of DRC into the submissions of EAC to the African Continental Free Trade Area (AfCFTA) Agreement processes, adding that this would boost the Community’s stake in the AfCFTA.

President Kenyatta said that the signing of the Treaty of Accession would be followed by the immediate removal of non-tariff barriers on the movement of capital, goods, services and people, which will in time lead to an increase in intra-EAC trade, even as he emphasised the role of the private sector in regional integration.

“Our Community is people-centred and private sector-driven. Member States of EAC remain committed to advancing and promoting the private sector’s interests as provided for under Article 127 of our Treaty. Furthermore, Partner States have committed to stimulating market development through infrastructural linkages, promoting conducive investment codes, protecting property rights and other rights, and the proper regulation of our private sector,” he said.

“Towards this end, all Partner States will welcome and establish immediate linkages between our business associations and those of the DRC so as to further develop our trade relations.

President Kenyatta urged the DRC to honour attendant commitments and conclude the domestic processes as per its constitution and deposit the instruments of ratification within the stipulated period of six months.

He said that with the entry of DRC, EAC would become bigger in size than Europe but with almost the same population size coupled with abundant natural resources, and skilled manpower and womanpower.

“Our ability to be a giant not only in East Africa and the globe, rests in our hands,” said President Kenyatta, adding that the region also has the advantage of common languages and cultures with Kiswahili as its lingua franca. 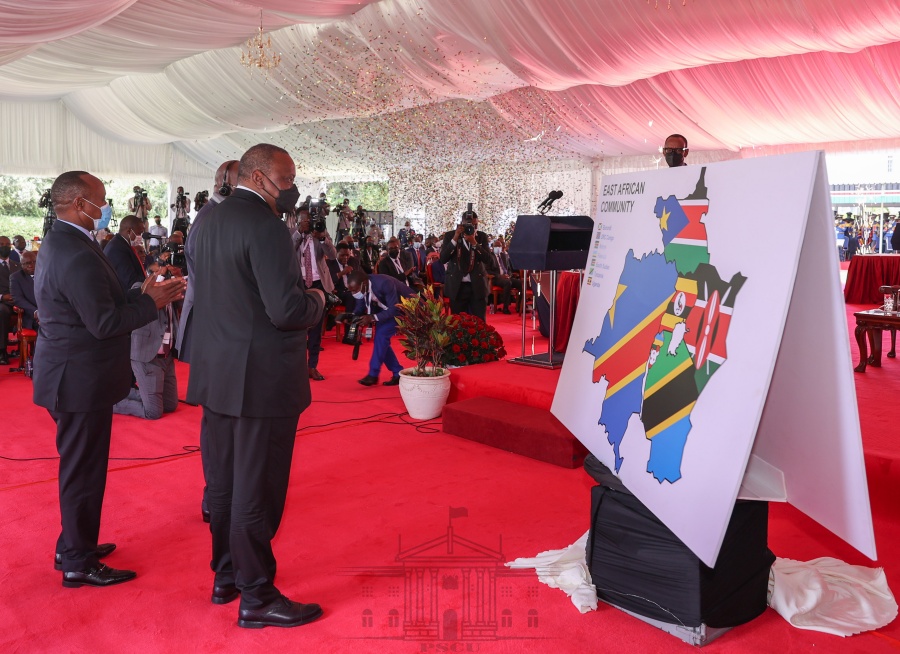 On his part, Ugandan President Yoweri Museveni said that integration consists of three things, namely: prosperity for people and their families through bigger markets; strategic security and brotherhood among the people of the region.

Rwandan President Paul Kagame urged EAC leaders to get down to implementing the commitments they have made so far to enable the bloc to realise its objectives.

The Chairperson of the Council of Ministers and Kenya’s Cabinet Secretary for East African Community, Ms. Betty Maina, said that the Treaty of Accession captures the commitments made by both EAC and DRC during the negotiations on the latter’s application to join the Community.

Ms. Maina said that DRC would join EAC at the Common Market stage in the integration when they formally accede to the Treaty, and gave an assurance that the Council would walk with DRC the journey as the country integrates into the EAC.

Speaking at the ceremony, EAC Secretary General Hon. (Dr.) Peter Mathuki disclosed that the EAC Secretariat together with DRC would develop the roadmap for the integration of DRC into the Community.

The Secretary General said that after ratifying the Treaty, DRC would join all EAC programmes and activities in line with the four pillars of regional integration.

Dr. Mathuki said that the entry of DRC had increased the region’s combined GDP by 22 per cent and geographical area by 79%.

DOWNLOAD: COMMUNIQUÉ ON THE SIGNING OF THE TREATY OF ACCESSION OF THE DEMOCRATIC REPUBLIC OF CONGO TO THE TREATY FOR THE ESTABLISHMENT OF THE EAST AFRICA COMMUNITY