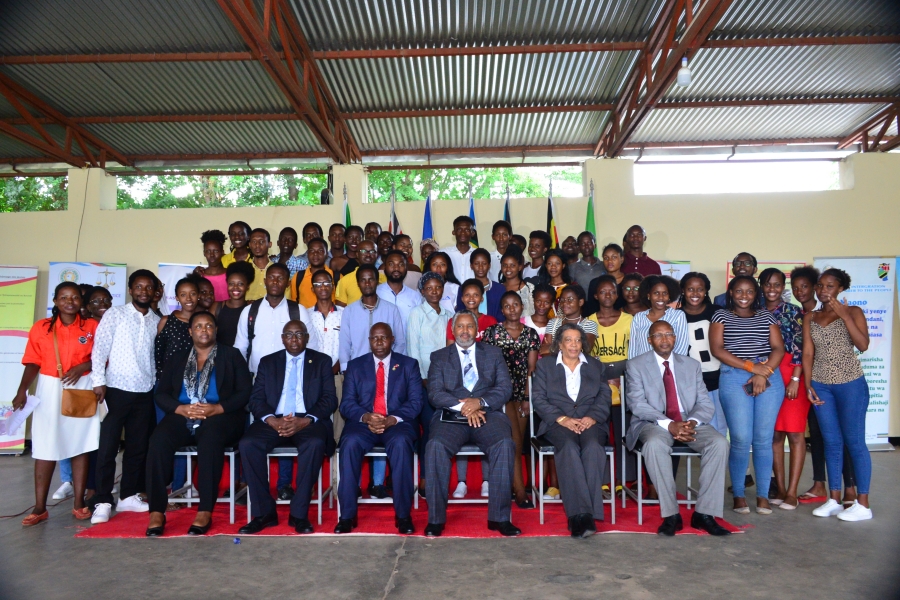 East African Court of Justice, 25th November l 2021: The President of the Court Hon Justice Nestor Kayobera calls on the academia and young Lawyers to engage in promoting justice in the region as their role in the integration agenda is very critical.

This was during a one- day public conference for the University Students and young Lawyers held at Light University Bujumbura as part of the EACJ 20th Anniversary celebrations.

His Lordship commended the Management of the University for the initiative to organize the conference and being the first one to engage the academia in large numbers in 20 years of the Court.

Justice Kayobera urged the Students and Lawyers, that it is very pertinent to read and familiarize with the Treaty, Protocols, EACJ rules of procedure and Law Reports all available on the website of the Court, this will enable to grow rich knowledge in the jurisprudence of the Court and be able to practice before the EACJ.

He further added that these engagements will continue in all Partner States to ensure people are aware of the services of the Court in protecting their rights in the integration process.

On his part, the Vice President of the Court, Justice Geoffrey Kiryabwire also called on students and lawyers to be peace makers as the best approach in dispute resolution mechanism in the region. He urged Lawyers to always be prepared to argue their cases before Court properly.

Prof. Gaspard Banyankimbona, Executive Secretary for Inter-University Council for East Africa pointed out the need for curriculum harmonization for the East African Common Higher Education Area, a directive of the EAC Heads of State since May 2017 which should be implemented.

Prof. Banyakimbona said that to fast- track and facilitate free movement of labour specifically for law professionals within the Community. He strongly indicated the need for development of a harmonized legal training and certification framework for EAC to ease mutual recognition of qualifications and professional mobility in the region

“A lawyer who has studied and trained in any Partner State can practice in another one without any restriction,” said Prof.

He called upon Partner States to take advantage of Article 126 of the Treaty in coming up with measures to harmonize legal training and certification.

The conference was attended by the students of law and communication, Directors, Deans, Lecturers of the University and Lawyers from Bujumbura, Judges and staff of the East African Court of Justice.

It is a private and faith-based university which aims Excellency and quality in the exercise of our mission to educate current and future leaders of this country and the region. With its 21 years of existence, the Bujumbura Light University has around 6,000 students divided into 10 faculties and 2 institutes as well as 7 Masters programs.

The University has 5 campuses: Here in Mutanga, Kinindo in the south and avenue du large; downtown for distance learning; a research campus in Kajaga / Route Gatumba and a campus in GOMA/Democratic Republic of Congo.

The University has also a center specialized in training and research in entrepreneurship (CUFORE) which supports academics and non-academics who wish to undertake and contribute to the issue of unemployment and the socio-economic inclusion of women and young especially, men not excluded of course.