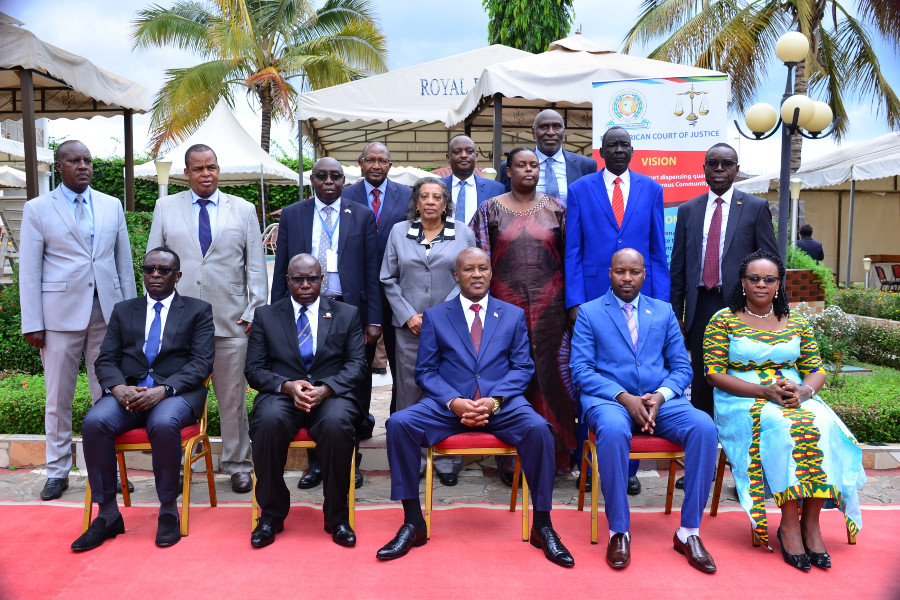 East African Community Headquarters, Arusha, Tanzania, 05th November, 2021: The Republic of Burundi has pledged continued support for all efforts to strengthen the East African Court of Justice (EACJ) and enable the Court to efficiently execute its mandate as per the EAC Treaty.

Making the pledge, Burundi’s Vice President Prosper Bazombanza hailed the EACJ for making significant achievements since its establishment in 2001.

Vice President Bazombanza thanked the regional court for electing to hold its sessions in Bujumbura, Burundi from 8th to 26th November, 2021, adding that the sittings by the both the First Instance and Appellate Divisions of the Court would play a crucial role in bringing justice closer to ordinary East Africans, who are the owners of the integration process in East Africa.

H.E. Bazombanza said that the Court sessions would enable Burundians to get know the Court and the services it offers.

“The Court’s decision to sit here over the next few weeks is therefore a pragmatic approach in the dispensation of justice. The brave decision helps take the Court to citizens and in so doing, “broaden and bolden” their perspective of integration on the one side, while reassuring them of adherence to the rule of law and administration of justice, when it comes to the application of the EAC Treaty on the other side,” said the Vice President.

The VP praised the Court for its achievements especially the fact that it had already guaranteed respect for the Treaty and its Fundamental Principles including the rule of law, good governance, respect for human rights, natural resource and environmental protection.

He further hailed the EACJ for opening Sub-Registries in the Partner States that will help citizens to submit cases to the Court in their own capitals as opposed to traveling all the way to the EAC Headquarters in Arusha, Tanzania where the Court has its offices.

“The East African Court of Justice also scrapped off case filing fees in order to allow East Africans file cases freely. Yet another significant development is the development of e-filling, case management and recording systems which enabled it to work even during the COVID-19 pandemic,” added the VP.

The VP said that the 20th Anniversary was an opportunity for the Court to reflect on its successes, challenges and to chart the way forward.

On his part, EAC Secretary General Hon. Dr. Peter Mathuki in a speech read on his behalf by East African Legislative Assembly Speaker Hon. Ngoga Martin, said that the Court had earned a reputation as an institution that can be trusted as a neutral arbiter in disputes by a wide range of stakeholders including members of the public, private sector, civil society, Partner States governments and EAC Organs and Institutions.

Dr. Mathuki said that the Secretariat would continue to engage the Council and Summit to consider the pending issues that affect the performance of the Court, namely the full-time service of the Judges to ensure justice is delivered in a timely manner; increasing the funding for the Court, and; granting fully functional financial and administrative autonomy to the Court.

Speaking at the forum, EALA Speaker Hon. Ngoga praised the Court for cultivating its space in the interpretation and application of the Treaty despite the challenges facing it, adding that the Assembly was well aware of the challenges that include jurisdictional issues and budget limitations.

Hon. Ngoga disclosed that the Assembly had passed a number of resolutions to promote the Court’s jurisdictional role and permanence of judges.

In his remarks, EACJ Judge President Hon. Nestor Kayobera disclosed that over the past 20 years, over 500 cases have been filed, with 300 of them having been determined, and 150 cases awaiting determination by the Court.