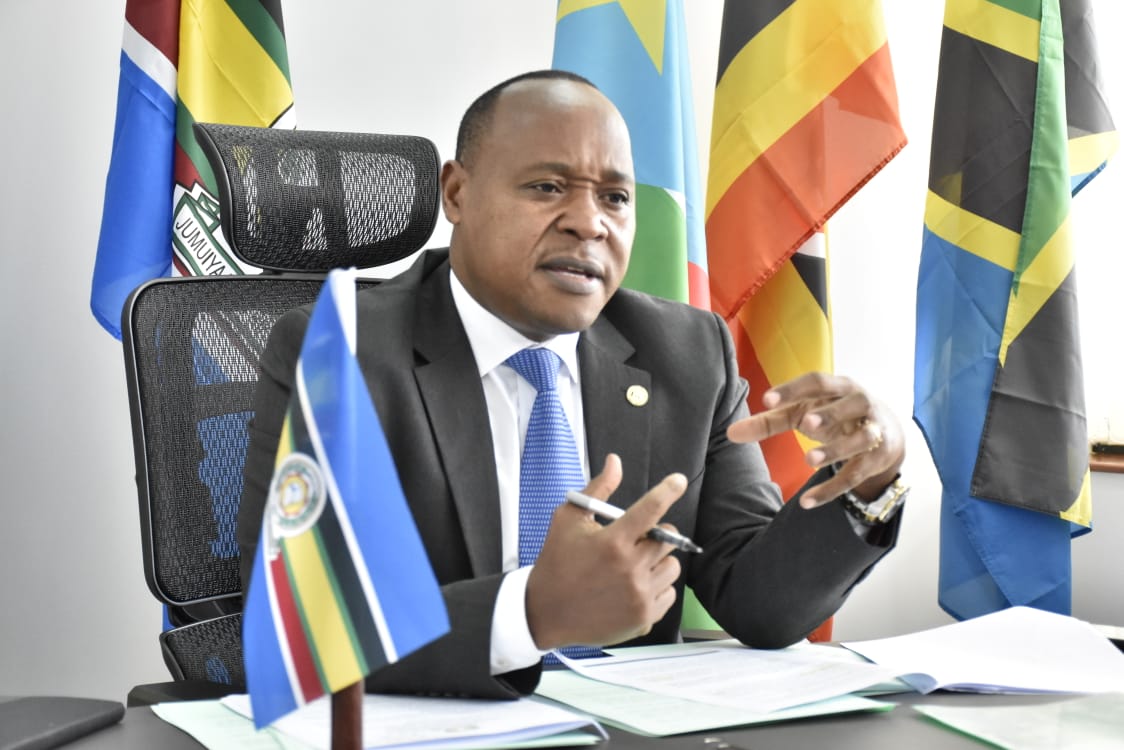 Hon. Mathuki called for the harmonization of COVID-19 testing charges and quarantine administrative procedures across the region.

Dr. Mathuki further pushed for the strengthening of public-private sector cooperation for joint investment in the manufacturing COVID-19 vaccines.

The Secretary General, however, noted that there was immense hope in the horizon with all Partner States having embarked on national vaccination drives, adding that more work needs to be done to increase vaccination levels in the region that currently stand at 2% vis-à-vis 70% in other parts of the world.

Dr. Mathuki urged East Africans to turn out in their numbers for the jab saying that without vaccination, people will fear visiting the region and critical service sectors and especially tourism would continue to suffer.

Dr. Mathuki said that the EAC would continue pushing for the adoption by Partner States of the EAC Pass, which integrates all EAC Partner States’ negative test results for COVID-19 and those already vaccinated to ensure safe and seamless travel across the region.

The SG disclosed that the EAC Adhoc Regional Coordination Committee, which has since 2020 been supporting the EAC Partner States through interventions including supporting testing capacity, provision of laboratory supplies, test kits and personal protective equipment, policy guidance and training of key personnel, among other steps, would continue with its work until the pandemic was fully contained.

The EAC Adhoc Regional Coordination Committee for COVID has been steering the regional response activities against the pandemic including coordination of policy organ meetings and mobilization of resources.

Hon. (Dr.) Mathuki was speaking during the SG’s First 100 Days Forum that focused on the highlights, challenges and achievements since he assumed office on 27th April, 2021. The forum drew 267 participants including Permanent/Principal Secretaries from EAC Partner States’ Ministries of EAC Affairs, Development Partners, Members of the Diplomatic Community, Private Sector, Civil Society, Staff of EAC Organs and Institutions, and the Media.

Dr. Mathuki disclosed that he had already held consultations with the members of the Summit of Heads of State to seek their views on how the Community should be run.

“The Heads of State reiterated that the Community should be steered in the spirit of the EAC Treaty that puts emphasis on a people-centred, market driven and private sector led integration process. These, to accelerate regional growth, create wealth and reduce poverty in the region,” he said.

“They further emphasised the need to take the EAC integration to the people at the grassroots, as they are the actual owners of the process,” said the Secretary General.

On the Customs Union and Common Market pillars, Dr. Mathuki disclosed that the 38th Meeting of the Sectoral Council of Ministers on Trade, Industry, Finance and Investment (SCTIFI), which was held on 26th May, 2021, had adopted a four-band CET structure (0%, 10% and 25%). The SG said that it was anticipated that an agreement on a rate that is above 25% shall be concluded before the end of 2021.

On increasing private sector participation in the integration process, Dr. Mathuki said that he had held consultative meetings with the business community in all EAC Partner States to grasp issues hampering the growth of the private sector in the region.

“The issues include Non-Tariff Barriers, implementation of trade policies and adoption of a regional coordinated approach in handling Covid-19,” said the SG.

Dr. Mathuki said that the Secretariat had further provided leadership in the formation of a Private Sector Technical Working Group (TWG) between the EAC and EABC, adding that the role of the TWG would be to promote private sector development in the region.

“The TWG’s specific mandate is to provide a platform for receiving and addressing concerns raised by the business community. It is also tasked with developing a harmonized framework for a collective response by Partner States to COVID-19 in the region, among other things,” said Dr. Mathuki.

The Secretary General hailed the United Republic of Tanzania and the Republic of Burundi who recently launched their own Trade Information Portals (TIPs), which would map out all their imports, exports and transit procedures, fees and time.

“It is anticipated that the TIPs will provide information for merchants seeking to do business across the region,” said the SG.

Dr. Mathuki said that intra-EAC trade had increased significantly over the past three months and singled out the Namanga border post where he said trade between Kenya and Tanzania had risen six-fold. He said that intra-EAC trade currently stands at less than 15% as compared to 70% within the EU and gave an assurance that the Community would try to raise it over the next five years.

On progress towards the full implementation of the EAC Roaming Framework, Dr. Mathuki reiterated the announcement by Tanzania that it was currently reviewing its legal framework and would be joining the One Network area (ONA) framework on 30th September, 2021.

“The Republic of Burundi has given an assurance that it will implement the One Network Area by 30th June, 2022. Full implementation of the EAC One Network Area is expected to lower the cost of communication in the region and spur intra-regional trade through harmonization of roaming tariffs,” he said.

“Following this invitation, five EAC Partner States submitted their applications to host the Institute. In line with the EAC procedures, the Secretariat is now in the process of constituting a Verification Committee to verify the said applications, including the suitability of the location and facilities being offered to host the EAMI,” said the SG.

On recruitment to 49 vacant positions within the EAC that had been advertised earlier this year, Dr. Mathuki said that the Community had received more than 20,000 applications for the positions, noting that the deluge of applicants was a demonstration of the eagerness of East Africans to serve in the Community.

The Secretary General said that the profiling and shortlisting of candidates had already been completed, adding that the Partner States through the Council of Ministers had already resolved outstanding issues that had been blocking the recruitment.

Dr. Mathuki further said that the EAC Sectoral Council on Tourism and Wildlife Management had also met after a while and had already approved the EAC Regional COVID-19 Tourism Recovery Plan, which is set to help the tourism sector in the region recover from the impact of COVID-19.

On the anticipated entry of the Democratic Republic of Congo into the EAC, Dr. Mathuki disclosed that the Verification Mission that was in Kinshasa from 25th June to 5th July, 2021 had since compiled its report which would be presented to the Council of Ministers as per EAC Procedures for admitting new members into the Community.

“In terms of market control, China has the largest share of the DRC market with imports from China having a share of 31.2 %; South Africa follows at 15.8% and Zambia takes third position at 13%,” said Dr. Mathuki, adding that the entry of DRC into the EAC would expand the bloc’s market to almost 300 million people, which would be highly competitive and attractive at a global level.

On revitalization of relations with Development Partners, Dr. Mathuki disclosed that over the last 100 days, he had held consultative meetings with various development partners to explore areas of supporting the bloc’s programmes and projects, adding that development partners had reaffirmed their commitment to working with the EAC.

On renewing relations with the Civil Society, the Secretary General said that he had already held discussions with the Chairman of the East African Civil Society Organizations’ Forum (EACSOF) on modalities to revive the EAC SG forum to ensure the active participation of the civil society in the integration.

On his part, Director General of Customs and Trade at the EAC Secretariat, Mr. Kenneth Bagamuhunda informed the meeting that one of the important objectives of the community is to reduce the cost of doing business in the region.  He disclosed that several milestones have been recorded in reducing cost of doing business in region inform of clearance time and documentation at the borders.

“The turnaround period has reduced tremendously from the ports to the inland and also inland to the ports in regard to export of goods. We have achieved about 70% reduction in terms of turnaround time”, added Director General.