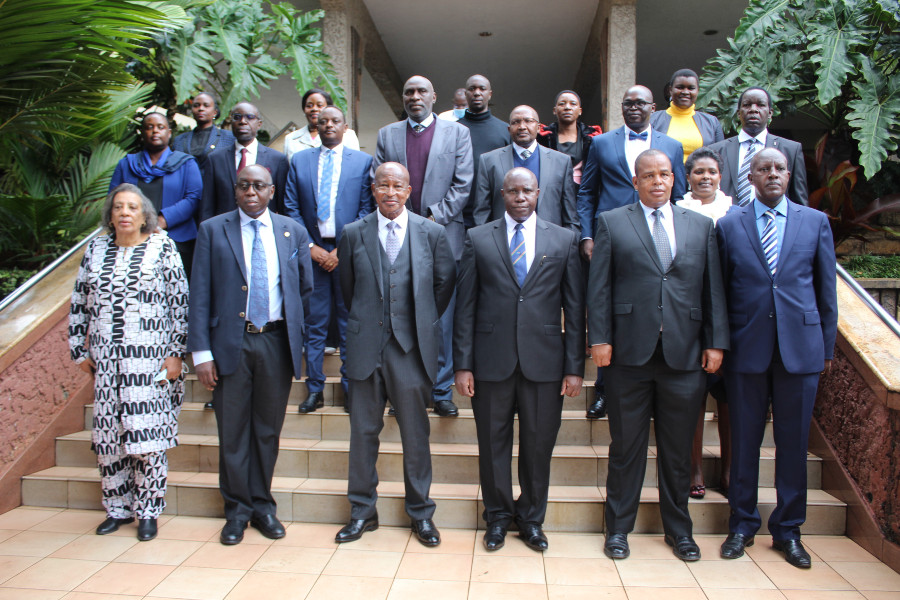 East African Court of Justice, 13th July 2021; The Attorney General of the Republic of Kenya, Hon Justice Paul Kihara Kariuki officiated the Training for Judges on good governance and rule of law in East Africa which set off yesterday in Nairobi.

The four-day training under the theme “Enhancing the ability of the Bench and the Bar in East Africa to promote and expand the East African civic space through the East African Court of Justice Architecture” is being attended by all Judges of the EACJ.

Hon Attorney General in his opening remarks noted that, the East African Community is primarily viewed as a regional economic integration bloc that has entered into a Customs Union, Common Market and currently seeking to implement a Monetary Union and, ultimately, a Political Federation.

It is for this reason that Articles 6 (d) and 7 (2) of the Treaty for the Establishment of the East African Community unequivocally prescribe that Partner States: “undertake to abide by the principles of good governance, including adherence to the principles of democracy, the rule of law, social justice and the maintenance of universally accepted standards of human rights.” said Justice Kihara.

His Lordship further stated that in order to achieve these objectives, the EAC Treaty established the Court and, under Article 23 of the Treaty provides that “the Court shall be a judicial body which shall ensure the adherence to law in the interpretation and application of and compliance with this Treaty.” The Court has also been clothed with appropriate jurisdiction under Article 27 with regard to the interpretation and application of the EAC Treaty and to have such other original, appellate, human rights and other jurisdiction as determined by the Council.

“I recall that there have been previous attempts to negotiate and conclude a Protocol to operationalize the extended Jurisdiction of the EACJ. I will, in my current capacity as the Chair of the EAC Sectoral Council on legal and Judicial Affairs, pledge to follow up on the status of the Protocol on extended jurisdiction of the Court to enable it promote the objectives of the Community” asserted The Attorney General.

Hon Kihara also said that the EACJ has in the recent past witnessed a growth in its activities. I note with appreciation that the report presented by the Court to the 40th Meeting of the EAC Council of Ministers on 25th February,2021 highlighted that a total of sixty-four matters were handled by the Court in the year 2020. This is commendable, considering the disruptions occasioned by the COVID-19 pandemic. “I am also delighted to note from the report that the Court has managed to deploy virtual hearings of Court proceedings.” said AG

“I wish to further note that the report presented to the Council indicates that “once the Court has delivered a judgement on a particular matter, there are no mechanisms to know of the implementation of the decision unless the beneficiary of the decision returns to Court on non-implementation of its decision”. The report further notes that Article 38(3) of the Treaty obligates a Partner State or the Council to take measures, without delay, to implement a Judgement of the Court. I would be happy to hear from the Court, views relating to the implementation of its Judgements by the Partner States or the Council and any challenges that may be faced.” stated Justice Kihara

In addition, the Council has also, in its previous meetings, deliberated on issues related to payment of costs arising from various matters. That, there have been deliberations in the Council to the effect that some of the costs awarded in some matters against the Community are high. “I appreciate that the Court is an independent organ, and the issue of costs is guided by the Rules of Taxation of the EACJ. I however wish to urge the Court, through the Registrar, to consider the concerns of the Council relating to costs” said the Attorney General.

Hon. Justice Kihara added that, the increased workload demands that the resources availed to the EACJ ought to increase proportionately. “I am aware that the EAC Community has been suffering from financial challenges occasioned by diverse factors. I will, however, through the EAC Sectoral Council on Legal and Judicial Affairs, call upon the Council to consider increasing resources allocated to the Court with a view of enabling the Court to discharge its mandate” noted the Attorney General

His Lordship recognized that the EACJ has played a very important role in the promotion of civic space as part of the maintenance of good governance and the rule of law that are the bedrock of regional integration. “I have reason to believe that this training will promote the EACJ as a forum for promoting civic space and empower you, judicial professionals to act as agents of good governance and rule of law agenda in the EAC.” said Hon Justice Kihara. The Attorney who previously served as the President of the Court of Appeal in Kenya and, the Director of the Kenyan Judicial Training Institute welcomed the training opportunity for him to interact and share his perspectives with the EACJ Judges.

On his part, the President of the Court Justice Nestor Kayobera noted that since majority of the Judges are newly appointed Judges at the EACJ, this training on good governance and rule of law, the key fundamental principles governing the achievement of the objectives of the Community, would not have come at a better time as this, as they embark on their judicial journey at EACJ ensuring proper interpretation and application of the Treaty for the establishment of East African Community and settle disputes that rise  as violations of Article 6 (d) and 7 (2) where most of the cases filed before the Court touch these fundamental principles of the Community.

His Lordship Justice Kayobera urged that Kenya being the current Chair of EAC, The Attorney General is the Chair of the Sectoral Council on legal and Judicial Affairs, as such a number of Court's outstanding issues should be resolved and also as a member of the Council of Ministers the Court can gain the front support to strengthen and protect its independence.

The Judge President pointed out the Judges serving on an ad-hoc basis over the years, “we have seen the number of cases going up. The result is that we are now having a backlog of cases as it takes 2 months before the session again resumes in Arusha. In addition, it becomes extremely difficult to attend to cases filed under certificate of urgency when the judges are away and by the time they resume, damage has already occurred. With a session of 25 working days compared to the cases” said Justice Kayobera

“I cannot finish without talking about the Treaty for the Establishment of EAC.  The EACJ will be making 20 years in November this year, yet the Treaty was ratified when members were only three but is still in its basic structure despite the increase in membership and diversity of cases being filed.” noted Justice Kyobera.

He finally said that they are informed that Council is yet to receive Kenya’s comments on the EACJ administration of Justice Bill that was sent to Partner States for comments almost 2 years ago. He urged that the proposed Bill once enacted will grant the Court a lot of leeway in its operations.

The Director of Centre of Public Interest Litigation, Mr Francis Gimara, said that the EACJ has construed its jurisdiction broadly in terms of the scope on the subject-matter of regional integration. The lack of a specific human rights jurisdiction has not disempowered the Court in addressing allegations of infringements of the Treaty —as evidenced from many decisions which shall be revisited in the course of this training. He added that, this proactiveness and innovativeness of the EACJ, in the rule of law and good governance spectrum, has made it the busiest and the most respected regional Court in Africa.

Mr Gimara stated that, the Court has encountered a number of hurdles along the way and there are still several more ahead, but am I am confident that the well written preamble of the EAC Treaty will always be a converging point for the response to the challenges encountered. Also hope that trainings like this one shall empower the judges to continue making bold and independent decisions for the benefit of all the citizens of the six East African Partner States.

“We pray that this training together with the tested resolve of the Court will further enhance the ability of EACJ to make decisions that promote good governance, democracy, and rule of law. The relevance of the Court, in acting as an effective bulwark in an era of shrinking civic and democratic space in some national jurisdictions cannot be underscored.” said Mr Gimara

The Training is funded by Ford Foundation in collaboration with the Centre for Public Interest Litigation who is facilitating. After the Training the Court will also hold the Plenary for the Judges to plan and review the activities of the Court and then conclude with the validation meeting of the EACJ Strategic Plan.