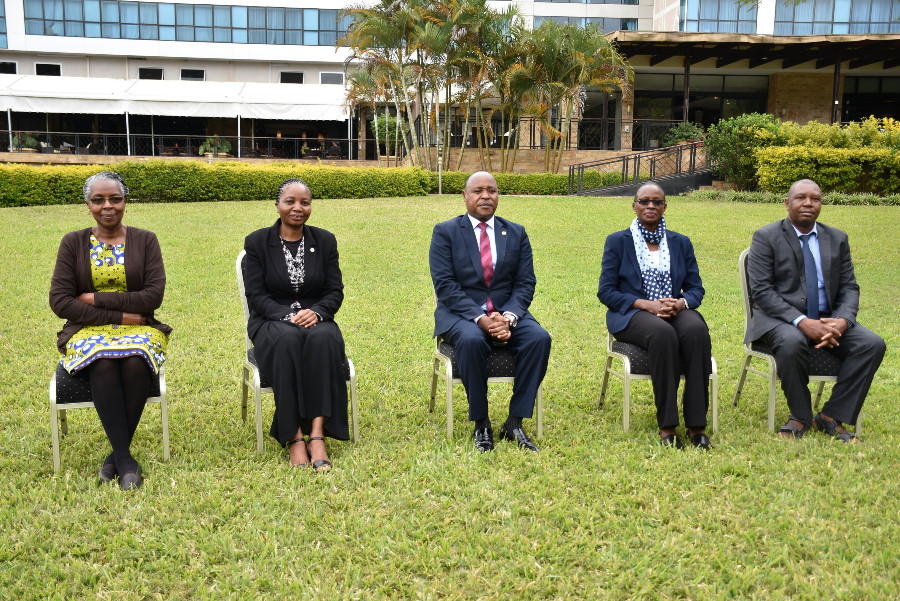 Instill value systems in youth to fight corruption in Africa

Dr. Mathuki said that instilling values and building the capacity of the youth to fight corruption at an early age would bring about a generation that abhorred corruption.

Dr. Mathuki further called upon the youth who constitute the biggest percentage of Africa’s population to be the continent’s goodwill ambassadors in the fight against corruption.

Dr. Mathuki was giving the keynote address during the commemoration of the 5th African Anti-Corruption Day in Arusha, Tanzania. The event themed “Regional Economic Communities: Critical Actors in the Implementation of the African Union Convention on Combatting Corruption” was hosted by the African Union-Advisory Board on Corruption (AU-ABC).

Dr. Mathuki said that there was an urgent need to strengthen integrity in Africa, adding that this would help fight corruption and increase foreign direct investments need to create jobs, reduce poverty and spur economic growth.

“The conversation on African Continental Free Trade Area by the African Political and Business Leaders is aimed at leveraging the power of businesses to drive Africa’s integration agenda. For this conversation to bring meaningful effort, to the African citizenry, we must infuse integrity and fight against corruption in the entire process,” said Dr. Mathuki.

“The overarching objective behind the AfCFTA is the elimination or reduction of tariff and non-tariff barriers amongst the 54 Countries that agreed to be members of the bloc by providing a single market for goods and services, facilitated by movement of persons in order to deepen the economic integration and prosperity. This will largely be facilitated by anti-corruption measures in the continent and removal of red-tapes and any other efforts that frustrate ease of doing business – that is how we shall attract investors,” added the Secretary General.

Dr. Mathuki said that for Africa to succeed in realizing the benefits of the AfCFTA, then corruption in continent’s systems needed to be wiped out, and urged the AUC-ABC, the African Union Commission, Regional Economic Communities and African countries to work together to eliminate the vice.

“Corruption is a cancer that will take our continent many centuries backwards. Corruption is indeed one of the non-tariff barriers that has limited intra-EAC trade which still stands at below 15%,” said the Secretary General.

Dr. Mathuki said that the fight against corruption could not be won by any one individual, institution or government single handedly but as a collective responsibility towards a fair and safe world for humanity.

“Therefore, EAC is committed to join hands with AU-ABC to jointly mobilize stakeholders and partners in implementing interventions that shall promote adoption of anti-corruption measures and combat corruption in the region and the continent,” he said.

Speaking at the event, the AU-ABC Executive Secretary, Mrs. Charity Nchimunya, said that fighting corruption was a complicated and hazardous with corruption networks fighting back, often viciously but said the fight must continue as it was the only way to build a better Africa that was integrated and devoid of corruption.

Mrs. Nchimunya said that the fight against corruption in Africa was a concerted effort that must involve building partnerships among all stakeholders including regional economic communities, civil society, private sector, development partners and AU Member States.

Mrs. Nchimunya urged EAC to continue scaling up the fight against corruption in the region in collaboration with Partner States’ governments and other actors.

The Executive Secretary called on EAC to fast-track the finalization and adoption of the Draft EAC Protocol on Preventing and Combating, adding that it will complement the existing national frameworks for fighting corruption in the region.

She called upon African countries that have not ratified the AU Convention on Preventing and Combating Corruption to do and particularly singled out the Republic of South Sudan to ratify the convention.

In her remarks, the Executive Director of the MS Training Centre for Development Cooperation, Ms. Makena Mwobobia, said that the fight against corruption was a long and tedious battle that could not be won overnight.

Ms. Mwobobia observed that corruption destroys good governance, public service delivery and socio-economic development, adding that one way to fight it was by promoting ethics, integrity and honesty among members of the public.

The MS-TCDC Executive Director further called for civic education for the masses to enable them understand their rights and the various forms of corruption.

On her part, Ms. Neema Mpembe Mwakalyelye, the Deputy Director General of the Prevention and Combating of Corruption Bureau (PCCB) in Tanzania, said that corruption affects development projects and programmes in addition to increasing poverty among citizens that can in turn cause political turbulences and social instability.

“In every major transnational organized crime, you will find the hand of corruption, be it in terrorism, narcotics trade, human trafficking and so on. We should all remember the fact that although corruption incidences may involve a few, but with corruption every one of us pays,” said Ms. Mwakalyelye.

“As Anti-Corruption Agencies, we are obliged to unleash our potential and continue to restore citizens trust deposited on us as custodians of moral values and Integrity. However, to register success, we need everyone to participate in the fight,” added the PCCB Deputy Director General.

She reaffirmed Tanzania’s commitment to work closely with other members of the East African Association of Anti-Corruption Authorities (EAACA) to finalise the protocol on preventing and Combating Corruption in East Africa.