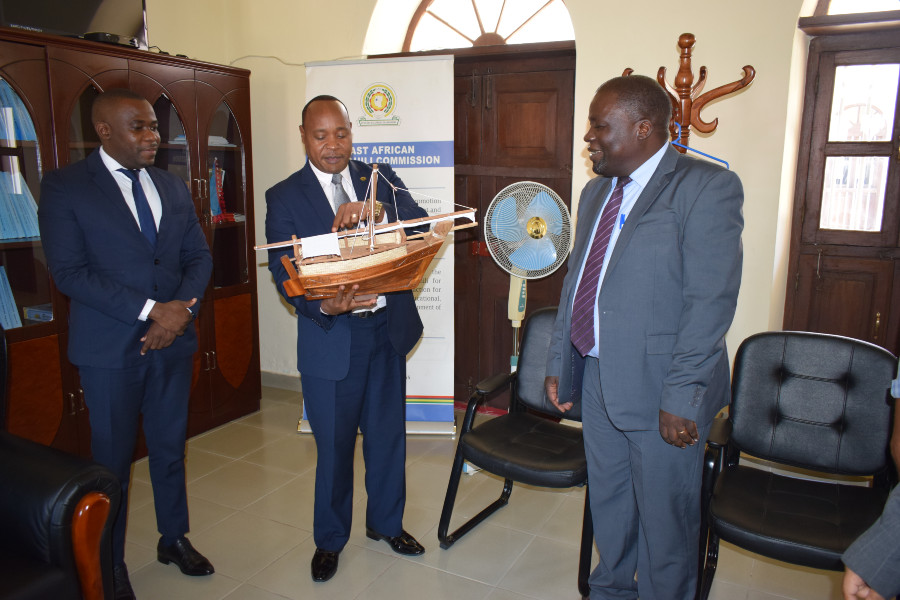 East African Community Headquarters, Arusha, Tanzania, 20th June, 2021: The Government of Zanzibar will provide land to enable the East African Kiswahili Commission to build a permanent headquarters on the island.

Zanzibar’s Minister of State in the Office of the President in charge of Labour, Economy and Investment, Hon. Mudrik Ramadhan Soroga, further assured the Commission of maximum support from the government of Zanzibar.

Hon. Soroga said that the region should henceforth treat the Kiswahili language with more seriousness by lobbying for its adoption as an official language of both the AU and UN, adding that this would be a source of pride and prestige for the region.

The Minister urged the EAC to fast-track the recruitment of staff to get the Commission up and running in executing its mandate, which is to promote Kiswahili as the lingua franca of the region.

The Minister was speaking at the Commission’s temporary headquarters on the island where he was received by the EAC Secretary General, Hon. Dr. Peter Mathuki. Other EAC present were the East African Legislative Assembly Speaker, Hon. Ngoga Martin, East African Court of Justice President, Justice Nestor Kayobera, EACJ Principal Judge and Dr. James Jowi, the acting Executive Secretary of the Commission. Also in attendance were EALA Members Hon. Dr. Abdullah Makame and Hon. Mnyaa Habib Mohamed, and the PS in the Ministry of Labour, Economy and Investment, Mr. Mussa H. Ali.

Receiving the Minister, Hon. Dr. Mathuki thanked the government of Zanzibar for the noble gesture while observing that proposed EAKC permanent headquarters would enable other EAC Organs and Institutions to operate more easily on the island nation.

The Secretary General said that development partners would be more interested in assisting the Commission if it had land for establishing a permanent headquarters.

Dr. Mathuki informed the Minister that the EAC Heads of State at their 21st Ordinary Meeting held on 27th February, 2021 had adopted Kiswahili and French to be official languages of the Community in addition to English, adding that EAKC was already working out modalities to implement the directive of the Summit in as far as Kiswahili was concerned.

Dr. Mathuki urged EAKC staff to work hard to raise the profile of the Commission on the island and in the entire region, adding that East Africans expect nothing but the best from them.

“Teamwork and respect among staff are crucial at all levels to enable the Commission to reach its goals. My tenure as the SG will be characterised by an open door policy to solving challenges. “Let us all get committed to changing the face of the Community,” said Dr. Mathuki.

“We need to take the Community to the people to cultivate a sense of ownership among East Africans,” he added.

On his part, EAKC Acting Executive Secretary Dr. Jowi informed the Minister that a recruitment process for additional staff for the Commission was already underway, noting that this would address the serious shortage of staff currently facing the Commission.

Dr. Jowi told the Minister that the Commission was currently domiciled at its temporary headquarters on the island and requested the government to allocated some land to enable the Commission construct its permanent home.