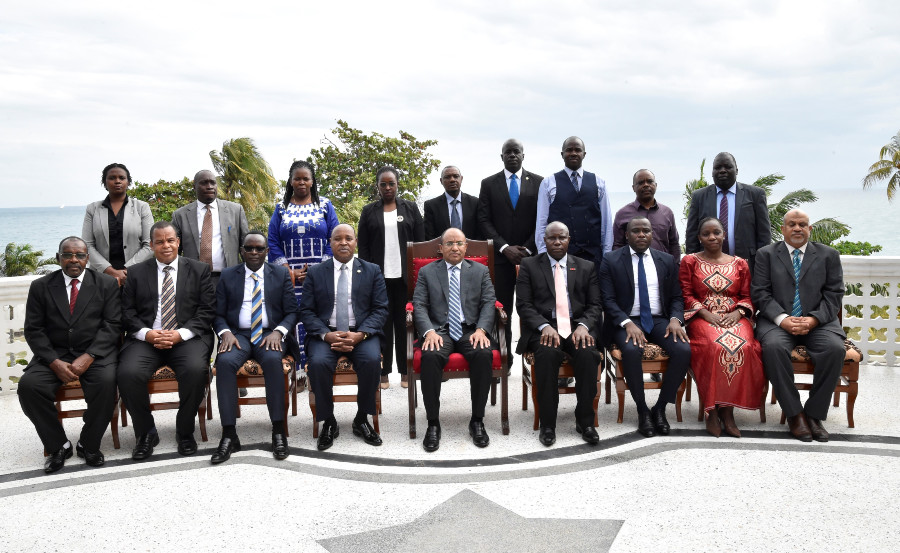 President Mwinyi said that EAC Partner States and African countries trade more with nations in other continents while trade amongst them was way too low, adding that intra-EAC and intra-continental trade was the best way to promote economic prosperity in East Africa and on the African continent.

President Mwinyi urged the EAC Secretariat to continue working closely with Partner States to address Non-tariff Barriers (NTBs) that were impeding intra-regional trade and singled out the tiff between national standards bodies that certify goods for export across the region.

The President noted that certification standards should be harmonised across the region with national standards authorities not insisting on retesting import goods that had already been tested certified in other Partner States, cautioning that this was a major impediment to the free movement of goods.

On the blue economy which is the mainstay of Zanzibar’s economy, President Mwinyi said that the island nation was keen on using its vast ocean waters well to create jobs and national wealth, adding that this required heavy investment.

He urged EAC to extend regional infrastructure development projects to link Zanzibar to other Partner States especially in the development of ports and marine transport. The President said the island nation was open for business and urged the EAC to entice foreign direct investment into blue economy sectors such as fishing, tourism, and petroleum and gas.

On awareness creation around the EAC integration, President Mwinyi urged the EAC to take the Community to the people saying that ordinary East Africans must start enjoying the benefits of the integration.

He thanked the EAC for headquartering the East African Kiswahili Commission on the island and assured the institution meant to promote Kiswahili as the lingua franca of the region of maximum support and cooperation from the government of Zanzibar.

The President urged the three EAC Organs based in Arusha to work closely and harmoniously saying that this was the best way to build trust among themselves and ensure better service delivery to the people of East Africa who deserve nothing but the best.

Speaking at the event, EAC Secretary General Hon. Dr. Mathuki informed President Mwinyi that active efforts were being made to involve the private sector in the integration process.

Dr. Mathuki further informed the President that EAC Organs would work in harmony while executing their different mandates, adding that teamwork was the best way to deliver services to EAC citizens.

The Secretary General informed the President that Democratic Republic of Congo President Felix Tshishekedi would launch the EAC Verification Mission to that country on 24th June, 2021 in the Eastern bordertown of Goma.

Dr. Mathuki said that the Council would advise the Summit accordingly on the suitability of admission of the DRC into the EAC based on the report of the verification mission which would be in the country from 23rd June to 3rd July, 2021.

On the Kiswahili language, the Secretary General said that the Community would push for its adoption as an official language by the both the African Union and the United Nations.

Hon. Mathuki said that the Secretariat was working to put in place a Trade Remedies Committee to continually address NTBs so as to ease doing business in the region, adding that quality marks on intra-EAC imports should be recognised throughout the region.

EACJ Judge President Justice Nestor Kayobera, on his part, said that the regional court would retain its independence as even it worked closely with both the Secretariat and the Assembly to drive forward the integration agenda. Justice Kayobera urged EAC Organs and Partner States to ensure that the law was obeyed when implementing the Treaty.

EALA Speaker Hon. Ngoga Martin said that he was happy with the camaraderie between the not just the EAC Organs but better relations with Partner States.

Also present at the courtesy call were, Hon. Mudrik Ramadhan Soroga, Zanzibar’s Minister of State in the Office of the President for Labour, Economy and Investment and the Permanent Secretary in the Ministry, Mr. Mussa H. Ali.