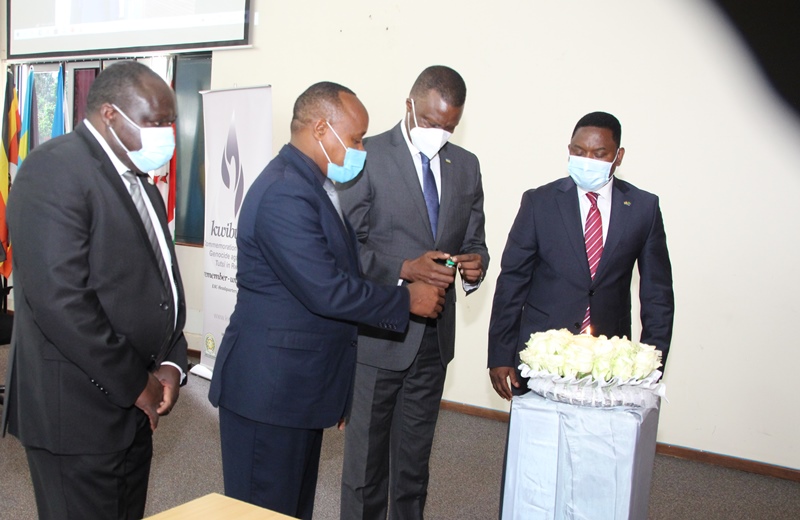 East African Community Headquarters, Arusha, Tanzania, 18th June, 2021: Kenya’s EAC Affairs and Regional Development Cabinet Secretary and Chairperson of the EAC Council of Ministers, Hon. Adan Mohamed has called upon the international community in general and the EAC Partner States in particular to work together at different levels in the fight against all forms of genocide ideology or any slightest signal of its kind.

“If we are to succeed in eradicating the genocide vice, we need to renew our commitments now than ever before, to show those who are still enslaved in those thoughts that the world can no longer tolerate any form of divisionism in its midst and that we are united and committed,” he noted.

The Chairperson of the EAC Council of Ministers implored the EAC Partner States to continue commemorating the atrocities that befell Rwanda in 1994 as a sign of solidarity, but also be more intentional rather than being a routine event. “We need to be proactive in engaging EAC citizens about the dangers of genocide, among other conflicts,” added the Cabinet Secretary.

In a speech delivered by the Kenya High Commissioner to Tanzania, H.E. Hon. Dan Kazungu on behalf of Hon. Adan Mohamed during the High-Level Panel Discussion on Genocide Ideology under the theme “Remember-Unite-Renew at the EAC Headquarters in Arusha, Tanzania the Cabinet Secretary appealed to the EAC Partner States, to fulfill International Law obligations by prosecuting genocide suspects or hand them over to Rwanda for prosecution and Justice.

“It is high time we rose as EAC and speak with one voice against the ideology of genocide, its denial and trivialization in our region,” he remarked.

Hon. Mohamed called upon the EAC Secretariat to coordinate Partner States in expediting the implementation of the EAC Protocol on Peace and Security and its adjoining Strategies like the component of Conflict Prevention, Management and Resolution (CPMR) which clearly spells out the dangers of the genocide vice and how it can be prevented, fought and uprooted.

On his part, the EAC Secretary General Hon. (Dr.) Peter Mathuki commended the Government and the People of the Republic of Rwanda for the resilience exhibited and the reconstruction of the nation not just economically but socially through the reconciliation efforts being undertaken.

Dr. Mathuki pledged the EAC’s support to the “Never Again Cause” through consultations with the relevant policy channels of the Community on setting aside 7th April as a day for reflection and holding of commemorative activities.

“We at the EAC identify and continue to condole with families of the victims who lost their lives during the barbaric actions committed,” said Dr. Mathuki.

The Secretary General disclosed  to the participants that in 2014 the EAC Heads of State Summit put-up a Genocide Commemorative Plaque at the EAC Headquarters and since then a Commemorative event is held every year in Arusha where EAC Staff and Partners converge to remember the victims and cultivate an atmosphere conducive to regional peace and security as envisaged by Article 124 of the EAC Treaty which encourages Partner States’ cooperation in prevention, better management and resolution of disputes and conflicts.