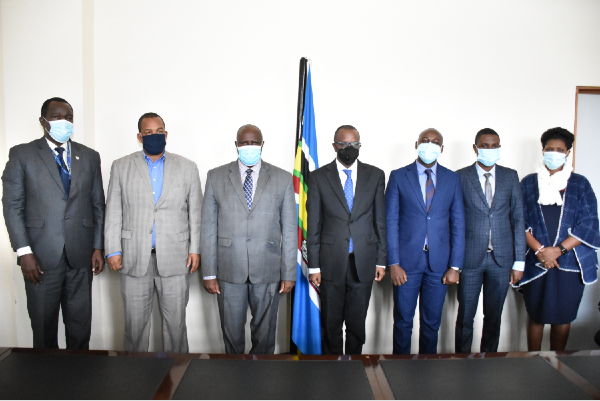 East African Court of Justice, 18th June 2021:The President of the East African Law Society Mr Bernard Ounda pays a courtesy call on the Judge President and Principal Judge of the Court to discuss areas of cooperation.

His Lordship Justice Nestor Kayobera President of the Court commended the good support so far provided to Court by EALS especially on the capacity building for the Lawyers in the Partner States on EACJ matters, publication of Law reports for the Court, survey on the implementation of the Court's decisions among others.

Justice Kayobera also called upon EALS as an Apex body which has an observer status to EAC to continue working together to implement the Treaty in particular Articles 126 on legal and judicial affairs to promote the achievements of the objectives of the Community.

"The Court cannot work without lawyers, working with lawyers does not mean interference and the independence of the Court does not mean working in isolation, we must work together for the interests of the people, so let us embrace the spirit of Teamwork" said Judge President

The Principal Judge Justice Yohane Masara, on his part, said that there is need to train lawyers on the new rules of the Court as the Court still experiences prayers from many advocates on filing of pleadings out of time as well as jurisdiction of the Court to enable them to know which cases to file to EACJ.

EALS President Mr Bernard Oundo expressed his gratitude to EACJ for the good working cooperation with EALS and re- committed to continue the support on various areas especially on capacity building for the Judges on interpretation of Trade agreement as many cases on Common Market Protocols are increasing and Lawyers will be trained on the new rules of the Court to improve the quality of the pleadings filed to Court.

Registrar also commended EALS for the good working relations and indicated that Court can't do without them as Key stakeholders and have filed several cases which have enriched the jurisprudence of the Court.