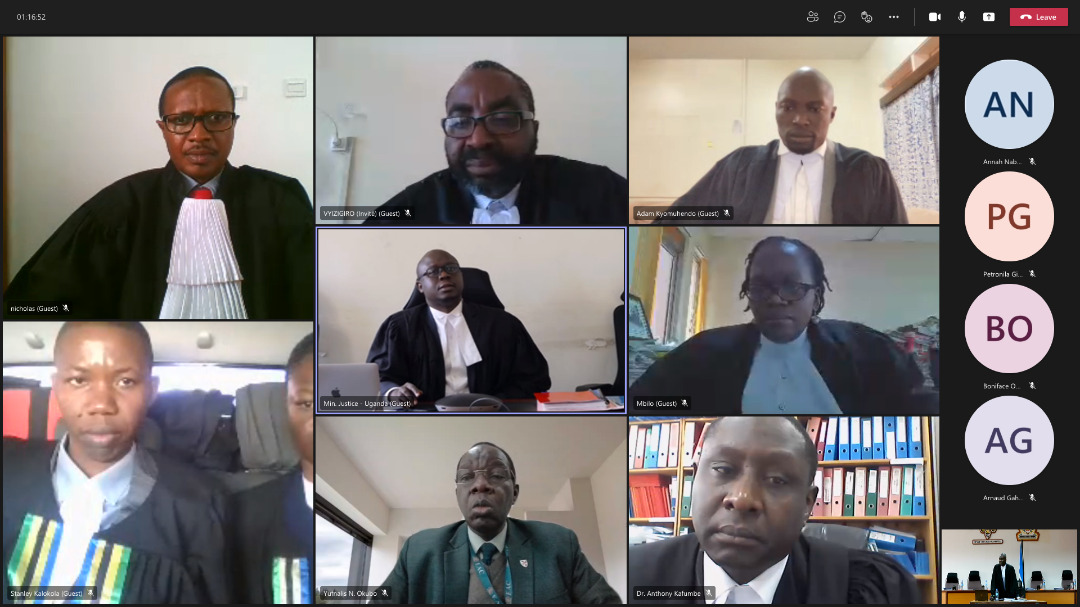 East African Court of Justice, 17th June 2021:  The First Instance Division allowed Adam Kyomuhendo (Applicant) to serve his case to the Attorneys General in the Partner States and the Secretary General of the East African Community (EAC) in a matter seeking Court’s interim orders restraining the Summit of the EAC Heads of State and Government of EAC or any Organ as may be delegated by the Summit upon taking any decision concerning the Application of the Democratic Republic of Congo (DRC) to join the Community as the 7th Member of the Community until the hearing and determination of the main Case (Reference No. 11 of 2020).

Kyomuhendo (Applicant) had already served the Attorney General (AG) of Uganda and therefore he will serve other six (6) parties (Respondents) that is the AG of Burundi, Kenya, Rwanda, South Sudan, Tanzania & the Secretary General of EAC in Application No.11 of 2020 and court will fix the matter for hearing in the next session.

The main Case is seeking Court orders to permanently stop the Summit of the EAC Heads of State and Government of the Partner States & the Secretary General of the EAC from admitting the DRC to EAC, alleging that the DRC has been illegally and without due trial or process holding Ugandan activist Samuel William Mugumya and more than 35 other Ugandans for more than 6 years contrary to the fundamental and human rights principles for the establishment of the EAC as envisaged under the Treaty.

The case further alleges that to admit the DRC into the Community in light of those fundamental human rights breaches would be to flagrantly violate the EAC Treaty which stipulates that as a pre-condition for admission into the Community, the Summit must verify and ascertain that such new member accepts the Community as set out in the Treaty and adheres to the universally accepted principles of good governance, democracy, the rule of law, social justice and observes human and people’s rights under the African Charter on Human and Peoples Rights.

Court also heard another case and allowed the Attorney General of Rwanda to file his response in Application No. 3 of 2020 seeking for interim orders against the government of Rwanda to suspend all the construction activities of Gisenyi Modern Market in Kigali until the completion of the Court process in the main Case (Reference No. 18 of 2018) pending hearing and determination.

The said Reference filed by ABBA LTD versus the Attorney General of Rwanda is challenging the revocation of the sale agreement of the Gisenyi Modern Market to the Applicant (ABBA LTD). The Applicant contends that the unilateral decision to revoke the sale agreement Infringes the Treaty and seeks compensation of the Contract. The matter will be fixed for hearing in due course.