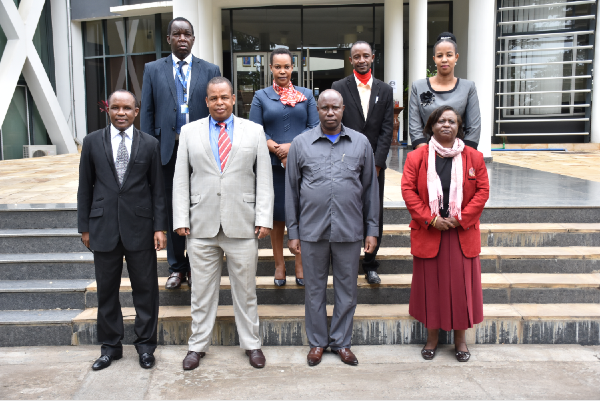 East African Court of Justice 15th June, 2021:  The President of the Court Hon Justice Nestor Kayobera accompanied by Principal Judge Justice Yohane Masara and the Registrar of the Court welcomed the President of East African Magistrates’ and Judges’ Association (EAMJA), Lady Justice Sophia Wambura with her delegation and handed over an office offered by the Court.

This was done as a way of supporting and strengthening the collaboration of the Court and national judiciaries through EAMJA. “Me offering an office to EAMJA is not a favor but an obligation” said Justice Kayobera

The President of the Court assured full support in facilitating the office and continue working together contributing towards the achievement of the EACJ mandate of the Court. His Lordship commended the National judiciaries for hosting the Sub-registries of the Court and therefore EACJ to host EAMJA office is a great opportunity for the Court and a good practice of cooperation among all Stakeholders.

Registrar of the Court, Yufnalis Okubo informed the meeting that the Judges of the Court have been attending and participating in all EAMJA annual conferences where a number of EACJ issues are discusses and this office at the Court will encourage continued support for one another in a number of activities.

On her part the President of EAMJA Lady Justice Sophia Wambura thanked the Judge President and the entire Court for the support and good hospitality demonstrated to accommodate them which will no doubt impact on the smooth operations of EAMJA. The office has been housed at the High Court Tanzania Arusha which was not strategically located to all East Africans.

Lady Justice Wambura also requested the Court to follow up on their request to East African Community as an observer which will enable EAMJA members to properly understand and familiarize with the issues of EAC Integration process. Madam President was accompanied by Justice Gwae Atam Judge in- charge Arusha and other Members of EAMJA.