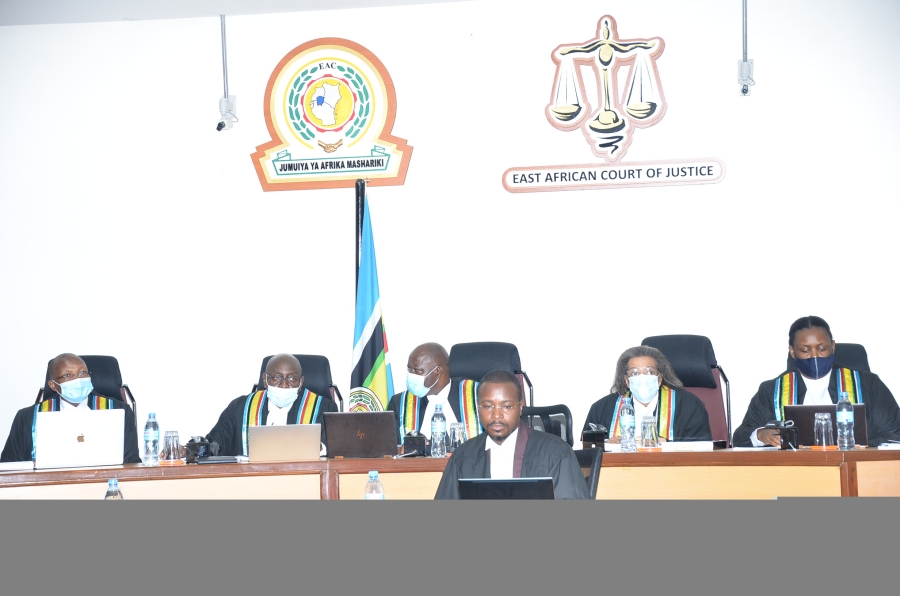 East African Court of Justice, 10th June, 2021:  The First Instance Division has resumed its June-July session in which it shall handle 19 matters only.

The Court started its session with the hearing of Application No. 9 of 2019) arising from Reference No. 16 of 2019) Bob Rugurika and 17 Others vs. The Attorney General of Burundi.

The applicants are seeking seeking interim orders restraining and prohibiting execution of the decision delivered by the Supreme Court of Burundi to seize the moveable and immovable properties of 32 individuals associated with another case in Burundi.

The applicants who are represented by Counsel Nelson Ndeki submitted that the Attorney General of Burundi (Respondent) need to provide assurance that with immediate effect, the government of Burundi will cease the said illegal appropriation of land and allow those evicted to return to their homes until the hearing and determination of the case.

The defence counsel Diomede Vyzigiro, however, told the court that there was no joint decision delivered by the Supreme Court of Burundi and the Prosecutor, adding that the application should therefore be dismissed because the Supreme Court has delivered the decision in that case and that all Applicants have been convicted and sentenced and were ordered to pay damages as compensation.

Counsel Vyzigiro, for the Attorney General of Burundi, further said that the petitioners were not residents of East Africa and that they are residents in Belgium and therefore the Court should not entertain the matter as provided under Article 30 (1) of the Treaty for the establishment of the EAC.

Article 30 (1) on Reference by Legal and Natural persons and provides that ……any person who is a resident in a Partner State may refer for determination by the Court, the legality of any act, regulation, directive, decision or action of a Partner State or an Institution of the Community on the grounds that such Act, regulation, directive, decision or action is unlawful or is an infringement of the provisions of this Treaty.

The hearing was before Honourable Judges of the First Instance Division; Justice Yohane Masara (Principal Judge), Justice Dr. Charles Nyawello, Justice Charles Nyachae, Justice Richard Wabwire Wejuli and Justice Richard Muhumuza. The judges said that they would deliver the ruling in due course.

The First Instance Division further adjourned the hearing of another Application No. 7 of 2019, seeking for a stay of execution of a judgment in a case between Quick Telecommunication services and James Korosso vs. Barclays Bank (T) Ltd at the Magistrate's Court in Moshi, pending hearing and determination of the main Reference and also seeking for a review of the Judgment in the First Instance Division that was delivered on 3rd July, 2019.

The matter was, however, adjourned to a later date to allow the parties file additional affidavits after the Attorney General of Tanzania was granted time to file his replying affidavit out of time. This matter came before the Deputy Principal Judge Hon. Justice Audace Ngiye, Justice Dr. Charles Nyawello and Justice Charles Nyachae.

The Appellate Division also concluded its sessions resumed from May 17th, 2021 on Tuesday, 8th June, 2021. The Division has in total handled 21 matters with a scheduling conference and hearing of an arbitration matter by the EAC Secretary General vs Avtech Stytems Limited. The matters of the Appellate Division were brought before the Judge President Justice Nestor Kayobera, Vice President Justice Geoffrey Kiryabwire, Lady Justice Sauda Mjasiri, Justice Kathurima M’Inoti and Lady Justice Anita Mugeni.