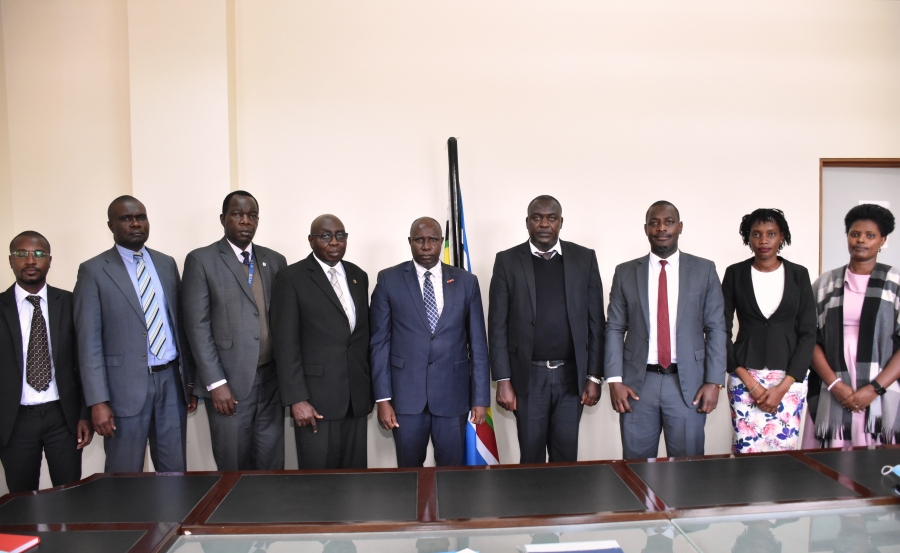 Justice Kayobera welcomed Mr. Njooka by saying that TLS was a key stakeholder of the Court and assured him that during his five-year tenure at EACJ would be guided by teamwork spirit and good faith among all the stakeholders of the Court, which belongs to people.

“We must work together to understand the Court and sensitize other members of the bar association as well as the entire public to use the Court,” said Justice Kayobera.

The Vice President of the Court, Justice Geoffrey Kiryabwire, on his part said that TLS- Arusha chapter is in a unique position being near the Court and therefore Lawyers based in Arusha understood the Court and could make good use of it.

Justice Kiryabirwe also encouraged the members of TLS to use the court's library and website to access to all the Judgments, Rulings and other information on the court that are very resourceful especially to Lawyers. His Lordship also told the team that as Lawyers they need to understand and be experts of the EAC Treaty, which is the key instrument that will enable them identify areas of litigation before EACJ.

Justice Kiryabwire also informed the TLS delegation that there was no exhaustion of local remedies to file a case to the Court, so you can go straight to file a case at the court. Justice Kiryabwire further called on the awyers to embrace the new norm of online sessions and asked the Bar to bring their digital expertise to support the smooth dispensation of Justice more so during this Covid- 19 pandemic that is still here with us.

The Vice President also told the team that Article 34 of the Treaty provides for Preliminary Ruling of National Courts, where a question is raised before any Court or Tribunal of a Partner State concerning the interpretation or application of the provision of this Treaty and encouraged the members of the Bar to take part in bringing such matters to this Court for pre-liminary rulings.

The Registrar of the court, His Worship Yufnalis Okubo, also informed the TLS Chairperson and his Team that the Court has previously held training workshops for Lawyers in Arusha to train them on the EACJ Rules of Procedure, adding that it would continue with the trainings more members of the bar.

He further highlighted the current physical sessions judges in Arusha and attributed it to the appointment of new judges to the EACJ in February this year. Mr. Okubo said that the new judges ought to familiarize themselves with the Court traditions first.

The Registrar further told the team that filing a case at the EACJ was free and therefore an opportunity for the litigants to file their cases in the court. In addition, he informed the TLS team that the Court has jurisdiction on arbitration matters and advised lawyers not to take the same matters elsewhere.

Summing up his visit, Mr. Njooka, the TLS Chairperson, promised to ensure continued good working relations with the regional court, adding that the society would continue engaging the Court in training workshops purposely to sensitize more lawyers on the role of the court, Jurisdiction and the court’s Rules of Procedure, among other things.

Njooka was accompanied by the TLS Vice Chairperson Sabato Ngogo and the Administrator, Ms Lindi Shamba.

Also in attendance at the event were the EACJ Registry Staff.