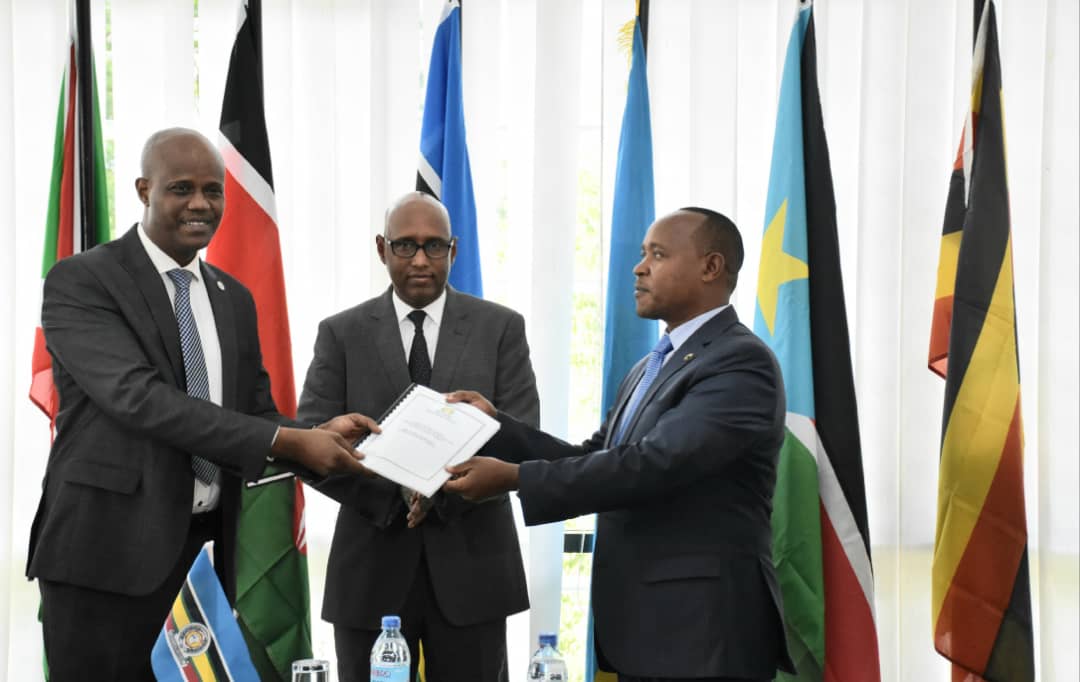 ……..As the community gets a new Secretary General

Speaking during the farewell ceremony the Hon. Adan Mohamed, Kenya’s Cabinet Secretary for East African Community and Regional Development and the Chairperson of the EAC Council of Ministers, said that the outgoing Secretary General, Hon. Amb. Mfumukeko has made tremendous contributions to the success of integration process during the last five years.

“I take this opportunity to thank you, Hon. Amb. Mfumkeko, for service to the Community, first, as a Deputy Secretary General and then as the Secretary General. The Community will always be grateful to you for the services you rendered during your tour of duty,” said Hon. Mohamed.

Meanwhile, the Chair of the Council welcomed the incoming Secretary General, Hon. Dr. Peter Mathuki and assured him of unreserved support in moving the integration process to the next level. Feel free to consult the Council for advice and support whenever necessary, added Cabinet Secretary.

“I can assure you that the stakeholders of the East African Community have high expectations of you and will keenly be monitoring what goes on in your management, especially in ensuring that the integration process is not only on course but also meets their expectation,” added the CS.

The Council Chair urged the Staff of EAC Organs and Institutions to be imbued with the spirit of patriotism while serving the Community.

“It is a privilege to serve one’s country. It is even a greater privilege to be called upon to serve the region,” said Hon. Mohamed

In his farewell remarks, the outgoing Secretary General, Amb Liberat Mfumukeko said that steering the EAC was like running a relay race, adding that he had run his five-year tenure and now it was time to hand over the baton to Dr. Mathuki.

Amb. Mfumukeko said that from 2016 to 2021, the period under his tenure, the Community had recorded significant achievements in implementing the four pillars of integration process, namely: the Customs Union, Common Market, Monetary Union and Political Federation.  Amb Mfumukeko added that many other achievements have been recorded in many areas including agriculture, fisheries, health, education, water and sanitation, finance and payment systems, civil aviation, science and technology, energy, trade and investment, to name a few.

He thanked EAC Partner States, especially the EAC Summit and the Council of Ministers for their unwavering support during the time he has been at the helm of the Community for the last five years. He also acknowledged great contribution by Development Partners for their support in several development programmes.

“I am very thankful to the many EAC Citizens who were of great support to me and I cannot name them all. I will never forget the humanity and kindness you have shown me. And I promise that I will always be a servant of the EAC in my capacity as a World Bank IDA Borrowers’ Representative and in all other functions that I will hold,” he said.

“I am cognizant of the very heavy responsibilities inherent in this appointment. I will remain dedicated, diligent and trustworthy so as to ensure we achieve tangible results for the betterment of the livelihoods of our people in East Africa,” said Dr. Mathuki.

He hailed his predecessor Amb. Mfumukekofor welcoming him to the Community and for steering the organization over the last five years.

“Your work will no doubt be remembered in the history of the EAC. I promise to continue in your footsteps in assuring increased participation of the private sector in the development of this region,” said Dr. Mathuki.

Dr. Mathuki highlighted some of his priorities for the next five years including: pushing for the implementation of liberalization of trade-in services; open skies; harmonization of domestic taxes and standards, and; the adoption of the EAC One Network Area (ONA) by all Partner States to reduce the high cost of telecommunications in the region as well as the finalization of the comprehensive review of the EAC Common External Tariff (CET) and its uniform application in the bloc.

Dr. Mathuki further promised to go the extra mile to improve the working relationship between policy makers and the business community through Public-Private sector dialogue initiatives.

“I firmly believe that an enhanced conducive regional business policy environment that takes into account proposals and recommendations from business and private sector will build confidence in the region as an attractive investment destination and trade hub,” he said.

He vowed to work with Civil Society and other Interest groups as equal partners to attain the UN Sustainable Development Goals in the region.

“I wish to commit to you that my office will always be open for consultations, brainstorming, mapping out strategies to effectively discharge our responsibilities,” he added.

He called upon all stakeholders to work together towards achieving the goals of the Community and her People with dedication and the highest level of integrity.