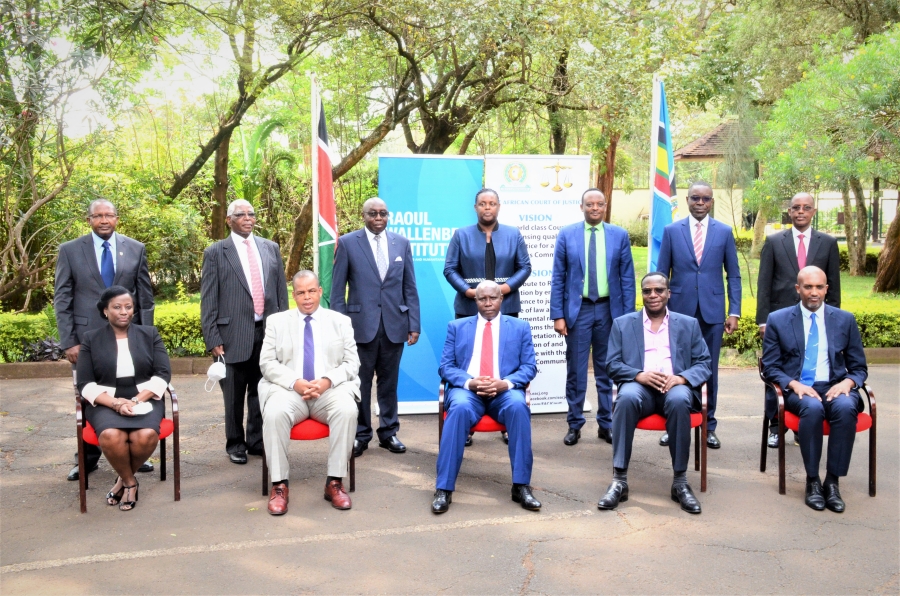 The Chief Guest, who was represented by Justice Smokin Wanjala of the Supreme Court of Kenya, congratulated the newly appointed EACJ judges upon their appointment to serve in the Court.

“I say prestigious, not for aesthetic effect, but due to the fact that the EACJ, stands shoulder to shoulder with courts of similar jurisdiction in other parts of the world,” said Lady Justice Mwilu.

“Being a judge myself, I cannot overestimate the importance and critical role an exercise such as this one, plays in launching one on his/her judicial journey. Indeed, I am only too keenly aware of the horror and trepidation, that greets newly appointed judicial officers who, without any form of induction or preparation, are thrown into the deep end of performing their functions, before the glare of expectant litigants,” added Justice Mwilu.

“For these “unfortunate” colleagues, their first six months in office are what is commonly referred to as ‘baptism by fire’. I must therefore at the outset, on behalf of our newly appointed brothers and sisters, express gratitude to the Registrar of the Court, and his entire Support Unit, for their foresight in organising this Workshop,” said the CJ.

The Acting CJ said that the Court’s role was critical to the promotion of regional integration and good governance in East Africa being the Judicial Organ of the EAC, adding that the appointment of the judges was a recognition by the Summit of EAC Heads of State their knowledge, expertise, and experience in the applicable law, for the resolution of potential disputes and challenges, that are bound to arise in the course of the implementation of the Treaty for the Establishment of the EAC.

Justice Mwilu further noted that the appointments come at a time of profound national, regional and international turbulence, occasioned by the Covid-19 Pandemic, the re-ordering of trade relations triggered by BREXIT, the intensifying asymmetry in North-South relations, international terrorism and the never-ending threats to good governance, democracy and human rights in our region.

“All these will have a direct impact on the work of the Court, thus cementing your individual and collective destiny with history,” she said.

The Acting CJ said that it was encouraging that the facilitators of the workshop were highly experienced and knowledgeable judges of the Court, some retired while others are still in Office and hailed the organizers having made sure that all critical information regarding the jurisprudence, procedures, workings and processes of the Court, for both the First Instance and Appellate Divisions had been catered for.

“There would not have been a better entry point than a presentation about the Registry and its organization. We all know that the registry is the engine of any court of law. Your Court is reputed for having a very well-organized registry system and processes. This will make your work not only enjoyable, but go a long way in enhancing the efficiency with which the Court carries out its mandate as spelt out in the Treaty,” Justice Mwilu told the Judges.

She emphasized on the areas of discussion during the induction process about the workings of the Registry has also been enriched by selected presentations on the Transcription of Court records and organization of the Library, key presentation which you must have found quite instructive is the one addressing the Treaty for the Establishment of the Community and related Protocols on Customs Union and the Common Market.

“I have no reason to doubt your knowledge and understanding of these critical instruments. The presentation on the place of International Law at the Court, should trigger interesting perspectives from the participants regarding this dynamic and ever evolving body of law and for those of you who may not have served as judicial officers at the national, regional or international level, the presentation on judgment writing in the Court should be very instructive and interesting."

Finally, the Ag. Chief Justice encouraged the Court to organize future meetings, workshops and colloquia where other courts from the jurisdictions of member states are invited to share their knowledge and experience with the judges of the Court. Such inter-court fora will provide a much needed opportunity for judges, legal scholars, and other practitioners from the region to periodically hold conversations on emerging and pertinent questions of law.

"After this 5-days workshop, the new judges will have benefited enough shared knowledge, experience and skills," said Justice Kayobera.