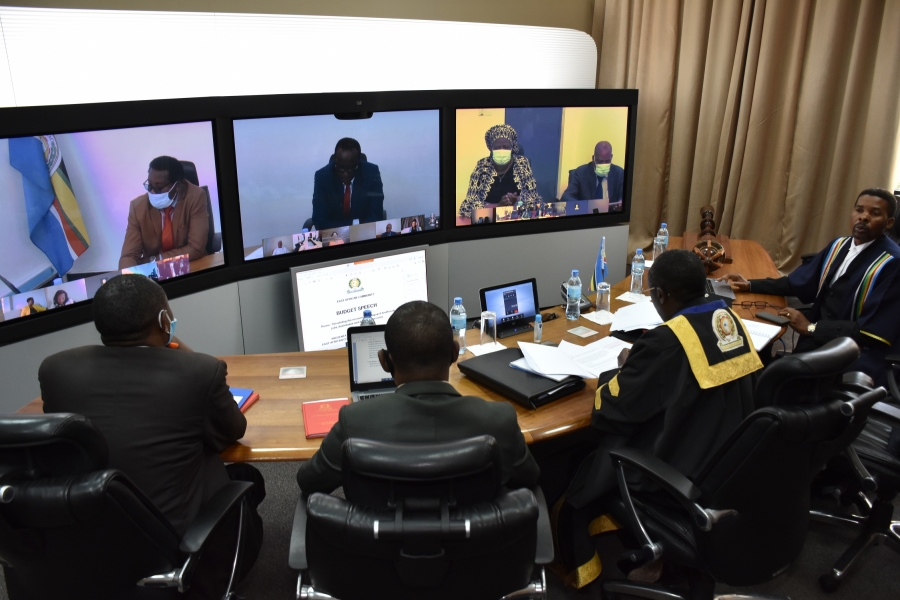 East African Legislative Assembly, Arusha, Tanzania: 25 September, 2020: The EAC has presented to the East African Legislative Assembly, the long-awaited Budget estimates for the Financial Year 2020/2021, totaling $97,669,708, at a sitting held via virtual conference. The Chairperson of the EAC Council of Ministers and State Minister for EAC, Republic of Rwanda, Hon Prof Nshuti Manasseh, presented the EAC Budget Speech this afternoon as the budget session got underway.

The 2020/2021 Budget is themed: “Stimulating the economy to safeguard livelihoods, jobs, businesses and industrial recovery.”  According to the Chair of Council of Ministers, the Budget estimates are presented at a time when EAC region as well as the globe is still reeling from the effects (and after-effects) of the Covid 19 pandemic, leading to lockdowns and a slowdown in economic activities. “The impact of the Pandemic on EAC Partner States, though not yet assessed fully, is no doubt surmounting”, the Minister said. He reiterated the EAC Budget would complement the efforts of Partner States and development partners to spur economic recovery arising from the Covid19 disruptions.

Priority Interventions for FY 2020/2021, Hon Nshuti nevertheless, said, would focus on several priority programmes. Key among them are on the consolidation of Single Customs Territory (SCT) to cover imports and intra-EAC traded goods, including agricultural and other widely consumed products as well as enhanced infrastructure development in the region. Hon Nshuti further said the EAC would enhance free movement of all factors of production and other areas of co-operation across the Partner States, as envisaged under the Common Market and Monetary Union Protocols and strive for the promotion of peace, security and good governance. Another priority, Hon Nshuti informed the attentive House, is to enhance regional industrial development through investment in key priority sectors, skills development, technological advancement and innovation to stimulate economic development. In Agriculture, the EAC is expected to work towards improvement of agricultural productivity, value addition and facilitation of movement of agricultural goods to enhance food security in the region.

Hon Nshuti said for the region to succeed in its programmes,. consolidated political support for the integration process as well as availability of adequate financial resources and timely remittances was vital. Success in efforts to mitigate the impact of the Covid 19 pandemic is a further assumption in the successful implementation of the USD 97 Million budget. Hon Nshuti said the consolidation of the Single Customs Territory would enhance intra EAC trade. “This will lead to a further reduction in the time taken by travelers and trucks at the borders and on the overall cost of doing business in the region”, the Minister remarked.

At the same time, the Minister was emphatic that implementation of the roadmap towards the EAC Monetary Union, will facilitate economic integration for sustainable growth and development of the Community. He said the measures would be arrived at through harmonisation of fiscal and monetary policies and on establishment of requisite institutions anchoring the East African Monetary Union. On the Political Federation, the Minister cited promotion of regional peace, security and good governance, and the Constitution-making process for the EAC Political Confederation, as critical, for the attainment of a stable and politically united East Africa.

The EAC is further expected to streamline and further consolidate its operational systems to achieve the desired level of efficiency, accountability and value for money.

Out of the proposed budget 57% (amounting to USD 55, 698,916) will be contributed equally by Partner States or raised as other internal revenues, while the balance (amounting to USD 41,970,792), which is pegged at 43%, is expected to be sourced from the Development Partners.

This year’s budget is a step down from the amount of USD 116,428,004 approved by the August House last financial year.

The Minister meanwhile, returned a scorecard of the performance of the EAC last financial year.

He said the Gross Domestic Product of the region had grown in real terms. “Mr. Speaker, in 2019, real GDP in East African countries grew by 5.9% from 5.7 % in 2018 and 5.6 % in 2017, which is the highest growth among all Regional Economic Communities in Africa”, Hon Nshuti said. The Chair of Council of Ministers attributed this to increased private consumption especially in the service sectors, investment in infrastructure projects and increased agricultural production because of a number of achievements by EAC under EAC Customs Union and Common Market pillars. Hon Nshuti, however predicted a dip in growth in the EAC this Financial Year, as a direct result of the global COVID-19 pandemic. “ln this regard, decisive measures are urgently needed to mitigate the economic losses, safeguard livelihoods and promote economic recovery,” he remarked.

On infrastructure, Prof Nshuti said the EAC continued to operationalize the One Stop Border Posts (OSBPs) with the Nimule/Elegu (Uganda/South Sudan border) and Tunduma (Tanzania/Zambia border) launched during the previous Financial Year.

The Minister said the implementation of the 400 km long multinational Kenya/Tanzania road, that traverses: Malindi -Lunga Lunga and Tanga, through to the Bagamoyo area, is under tendering stage, following the securing of a financing package to the tune of EUR 375 Million from the African Development Bank (AfDB) and European Union by the two governments. The Minister said construction of road sections in Kenya and Tanzania, was expected to commence in 2020.

He further mentioned of commencement of construction of the 260 km Kabingo - Kasulu -Manyovu road in Tanzania and Gitaza - Rumonge (45 km) in Burundi, that will link the two Partner States following grants and loans secured from the AfDB.

Prof Nshuti also informed the House of the progress on the Standard Gauge Railway (SGR) in the region.

“Mr. Speaker, the implementation of the Northern Corridor and Central Corridor Standard Gauge Railways in Kenya and Tanzania respectively, is ongoing. Phase 2A from Nairobi to Naivasha was completed in September 2019 (a length of 120 km) together with the dry port in Naivasha completed in December 2019 and launched in March 2020. Likewise, substantive progress has been achieved on the construction of Phases I and ll of the Central Corridor Standard Gauge Railway from Dar es Salaam - Makutupora a length of 722 km is on course”, he said.

On aviation and airports subsector, the Minister said the EAC Secretariat had coordinated the implementation of EAC seamless Upper Airspace project, including harmonization of regulations, manuals of air navigation services and development of common Secondary Surveillance Radar (SSR) codes.

“Mr. Speaker, EAC Partner States have committed to fully implement the Yamoussoukro Decision as part of the Common Market Protocol and in line with the ongoing efforts by the African Union Commission (AUC) and the African Civil Aviation Commission (AFCAC) to establish and operationalize the Single African Air Transport Market (SMTM)”, he said.

On agriculture and food security, Hon Prof Nshuti informed the legislature, that EAC framework for harmonised procedures for conducting Pest Risk Analyses (PRAs) for maize, rice and beans had been adopted, paving way for its extension to other key agricultural commodities.

“Mr. Speaker, in the Financial Year 2020121, the Community will focus on the following key agriculture sector priorities: (i) support harmonization of regional agricultural policies, strategies and legislation to spur agricultural transformation; (ii) enhance agricultural productivity and competitiveness, food and nutrition security and safety and youth empowerment in the agricultural sector; and (iii) promote livestock and fisheries productivity and trade for sustainable livelihoods”, Hon Prof Nshuti said.

With the region keen on industrialization, the Minister reiterated EAC had already embarked on the preparation of a new EAC lndustrial Policy Strategy and Action Plan for the next five years (2021-2026) that inter alia, takes in to account emerging developments such as the fourth industrial revolution, biotechnology, oil and gas explorations, African Continental Free Trade Areas (AfCFTA) and importance of protecting nascent industries. The Chair of Council of Ministers said EAC had further developed competitive Cotton, Leather, Automotive, Fruits and Vegetables; Pharmaceutical and Extractive and Mineral Value Chain Strategies.

“Mr Speaker, the region continues to develop the pharmaceutical sector and has identified products that can be procured locally; established a task force to oversee the procurement and is developing a Pharmaceutical Manufacturing Bill”, Hon Prof Nshuti said.

Commission, Bill 2019. ln respect of representation, Hon Prof Nshuti said the Assembly carried out sensitization and outreach activities to assess Partner States' implementation of the Common Market Protocol in relation to cross-border trade in the EAC region in the wake of the COVID -19 pandemic. The Assembly has also maintained excellent relations with the National Assemblies of the Partner States through, participation and coordination of the meeting of the EAC Speakers' Bureau, exchange and aftachment programmes and the 10th lnter-Parliamentary Games in Kampala, Uganda, Minister Nshuti said.

At the Court, Hon Prof Nshuti stated of the increased number of cases filed before it, citing upward trend especially in the second half of the Financial Year. “The Court's priority interventions in the next financial year are to increase the number of cases concluded at the earliest possible time, enhance the skills of judges and staff for delivery of justice, conduct sensitization and awareness programmes in the Partner States and enhance collaborations with other regional and international Courts”, he maintained.

The House is now expected to consider and debate on the Budget proposals beginning on Monday next week.