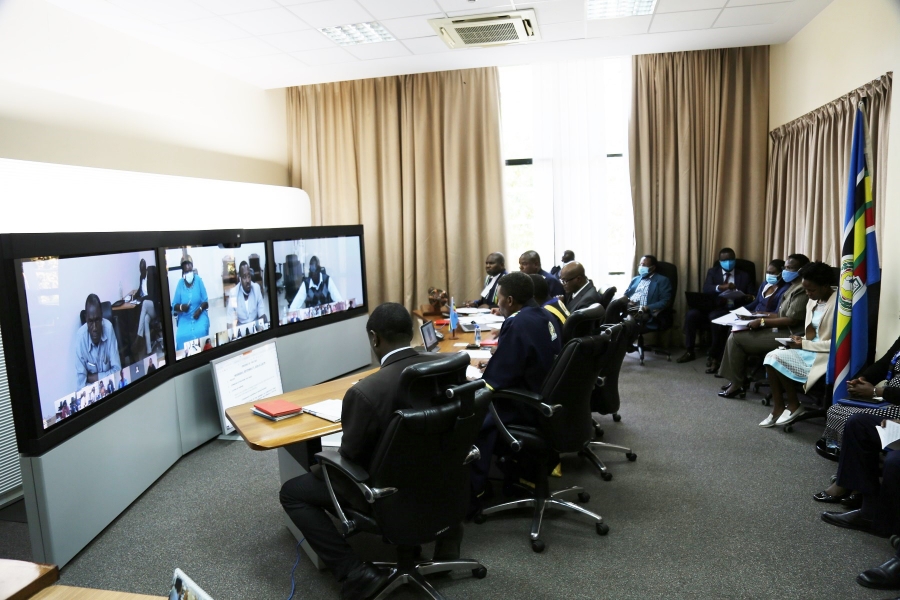 The Vote-on Account was preceded by a Resolution of the Assembly to constitute itself into a Committee of Supply to consider and approve it, in a first such activity for the EAC. Prior to the allocation exercise, the Assembly had received and debated on the Report of the Committee on General Purpose by the Chairman, Hon Denis Namara.   The report urges the Secretary General and the Council of Ministers to comply with provisions of the Treaty and the EAC Budget Act 2008, in regards to the preparation and presentation of the Budget to the House.

Hon Namara informed the House that the Assembly would continue to stand firm to ensure all approved activities as envisaged in the Annual calendar are undertaken in light of article 14(3) (c) of the EAC Treaty.

Three weeks ago (August 13th, 2020), the House proposed the Vote on Account goes for scrutiny by the Committee on General Purpose.  EALA Speaker, Rt Hon Ngoga Karoli Martin, (then) ruled the Vote on Account be handled urgently without any further delay, but with compliance to requirements/mechanisms set out under the EAC Budget Act, 2009.   Under the said law on Vote on Account, the amount to be disbursed, must not exceed one-third of the budget of the Community.

At the same time, the Assembly received budget estimates for the Financial Year 2020/2021 amounting to USD 97, 669, 708 Million prompting the Speaker to forward the estimates to the Committee on General Purpose for perusal.

At debate yesterday, Hon Rose Akol said the presentation of budget needed to be in line with normal budgeting norms and procedures. Hon Dr Oburu Oginga said the debate on Vote on Account had taken unnecessarily long due to a number of issues, citing lack of presentation of the budget to the Assembly on time by the EAC Council of Ministers. “We need a proper explanation on the matter, which should not be repeated in future”, he said. Hon Amb Fatuma Ndangiza said while the EALA and other Organs had in the past returned clean (unqualified) reports, there was need to embrace timeliness in way, manner and fashion of doing business to avoid consequences of delayed budgets.  “I also urge the Council to ensure Partner States improve on their modalities of the annual remittances, so that we are able to do our work as is envisaged in the treaty obligation”, Hon Amb Ndangiza said.

Hon Dr Woda J. Odok said there was need for stronger cooperation between all Organs and institutions, so that the budget making process is efficient. Others who supported the report of the Committee on General Purpose on the approval of the Vote on Account were Hon Fatuma Ibrahim, Hon Paul Musamali, Hon Kennedy Mukulia, Hon Abdikadir Omar Aden, Hon Wanjiku Muhia, Hon Kennedy Kalonzo, Hon Eng Mohammed Mnyaa and Hon Fancy Nkuhi.

The EAC Secretary General, Hon Amb Liberat Mfumukeko while lauding the General-Purpose Committee, said the EAC Budget Act 2008 as well as the EAC Financial Rules and Regulations dictated how budget processing is done.  “We were compliant in terms of submitting the Budget proposals as provided for by the Act.  However, in March this year, some borders closed, owing to the pandemic, we followed the law by writing to the Assembly in time to request for extension”, he said. “We could not hold the Council meeting in time, given the situation of the pandemic and the electioneering process in the Partner States”, he added. On arrears owed, Hon Amb Mfumukeko reiterated commitment to adhere to the Council decision on the matter. “I am confident, we shall find a solution to the matter,” he said.

He further informed the House of the organization’s commitment to the cause of integration. “I assure you there is good capacity in the Secretariat.  We have to be proud of the fact that we are considered the best performing REC, the challenges notwithstanding”, the Hon Secretary General concluded.

Hon Prof Nshuti Manasseh, Chair of Council of EAC Ministers, reiterated despite the delay of budget approval occasioned by a number of factors beyond control, better coordination of the activities would be done in future. He said the arrears owed were a liability and needs to be met. “We hope the two Partner States that are yet to submit the letter of no objection will do so”, Hon Nshuti stated. The Chair of Council of Ministers rallied for cooperation between the Assembly, Council and Secretariat, to stem jeopardy of the bigger picture of integration.

The passage of the Vote on Account sees the resumption of operations of the Community as it awaits the main Budget.

Last Financial Year, the Assembly approved a budget amounting to USD 111,450,529 following Budget proposals presented to the House in June 2019 by the (then) Chairperson of the Council of Ministers and Deputy Minister for Foreign Affairs and East African Co-operation, United Republic of Tanzania, Hon Dr Damas Ndumbaro

NOTES TO THE EDITORS

(a) The Assembly may approve a vote - on - account in every financial year to enable normal operations of the Community in the first quarter of the new financial year and before the approval of the budget;

(b) The vote - on - account shall not exceed one-third of the total budget of the Community or of any of its Institutions.