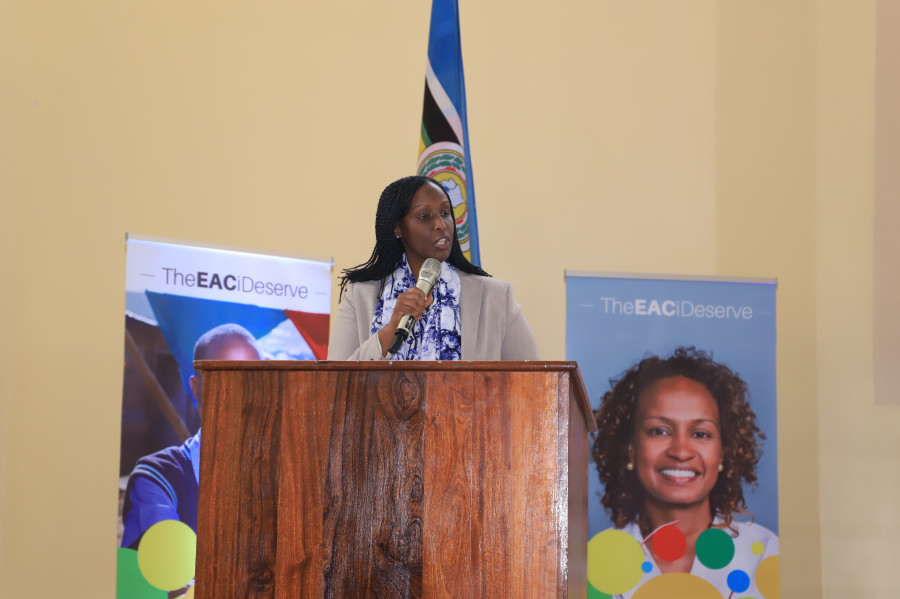 The Rwandan edition of the campaign was launched at the College of Medicines and Health Sciences, Remera Campus, University of Rwanda in Kigali, Rwanda.

The campaign aims at creating opportunities for EAC citizens, to express themselves on how they feel after 20 years of the EAC integration and what they think should be done for it to work better for their lives in the coming years.

Speaking on behalf of the Rwandan Minister of Foreign Affairs and International Cooperation Hon. Dr. Vincent Biruta, the Director General of African Cooperation, Ms. Diyana Gitera, said the campaign was an important part of EAC’s 20th Anniversary activities, adding that through increased communication and awareness, it would engage the most critical stakeholders – the youth – on an exciting path towards EAC’s integration.

“It is my hope that the sensitization event taking place throughout the year, turns out to be a milestone that creates a new momentum to inspire East Africans to embrace and deepen the integration process,” said Ms. Gitera.

The Director General cautioned the participants on the challenges that will be equally part of the narrative throughout the campaign. “Our wish is to appreciate the positive impact of the EAC, but also and perhaps more importantly, correct the course wherever necessary.”

She reminded the youth that the short film competition entailed in the campaign was meant to enable them to capture real stories on the EAC while demonstrating how more innovative EAC could be to get to the “EAC we want.”

On his part, the EAC Deputy Secretary General in charge of Planning and Infrastructure, Eng. Steven Mlote, said that in the last 20 years, the Community had witnessed commendable growth in trade, infrastructure, better policies but added that regional social cohesion needs to be improved.

The DSG said that campaign would offer East Africans the opportunity to voice their concerns and share suggestions on how best EAC can forge forward as a region. He urged Rwandans and the youth in particular to participate in the discourses and freely share ideas and suggestions with the EAC Secretariat, the EAC Legislative Assembly, Partner States, and the East Africa Court of Justice, and other institutions of the bloc.

“The future belongs to our youth’. Our EAC Vision 2050 requires skills, innovations, manpower and strategy to attain. Putting our youth at the centre of this blueprint brings us a step closer to accomplishing it,” said the DSG.

He disclosed that the campaign would engage the young people in EAC through a Short Film Competition, adding that prize money of US$25,000 was up for grabs by 33 youthful winners in the creative campaign.

Making presentation about the status of the EAC integration for the past 20 years, the EAC Deputy Secretary General in charge of the Productive and Social Sectors, Hon. Christophe Bazivamo, said the campaign provides a platform to hear stories from every East African on the impact the EAC has made to his or her life and the future direction the citizens want the region to take.

So far, the campaign has been successfully launched in Nairobi, Kampala and Bujumbura. The Republic of South Sudan and the United Republic of Tanzania are next on the line.

The EAC I Deserve is a year-long campaign creates a platform where citizens can share their aspirations, ambitions and desires about the livelihood they wish to experience going forth. The national sensitization activities are part of the mobilization efforts to encourage citizens to take the chance to inspire the change they want to see in the region.

The campaign that targets to reach over 10 million citizens, encourages all stakeholders to work together to build an economically secure and prosperous future as citizens brought together under one theme: One People, One Destiny.