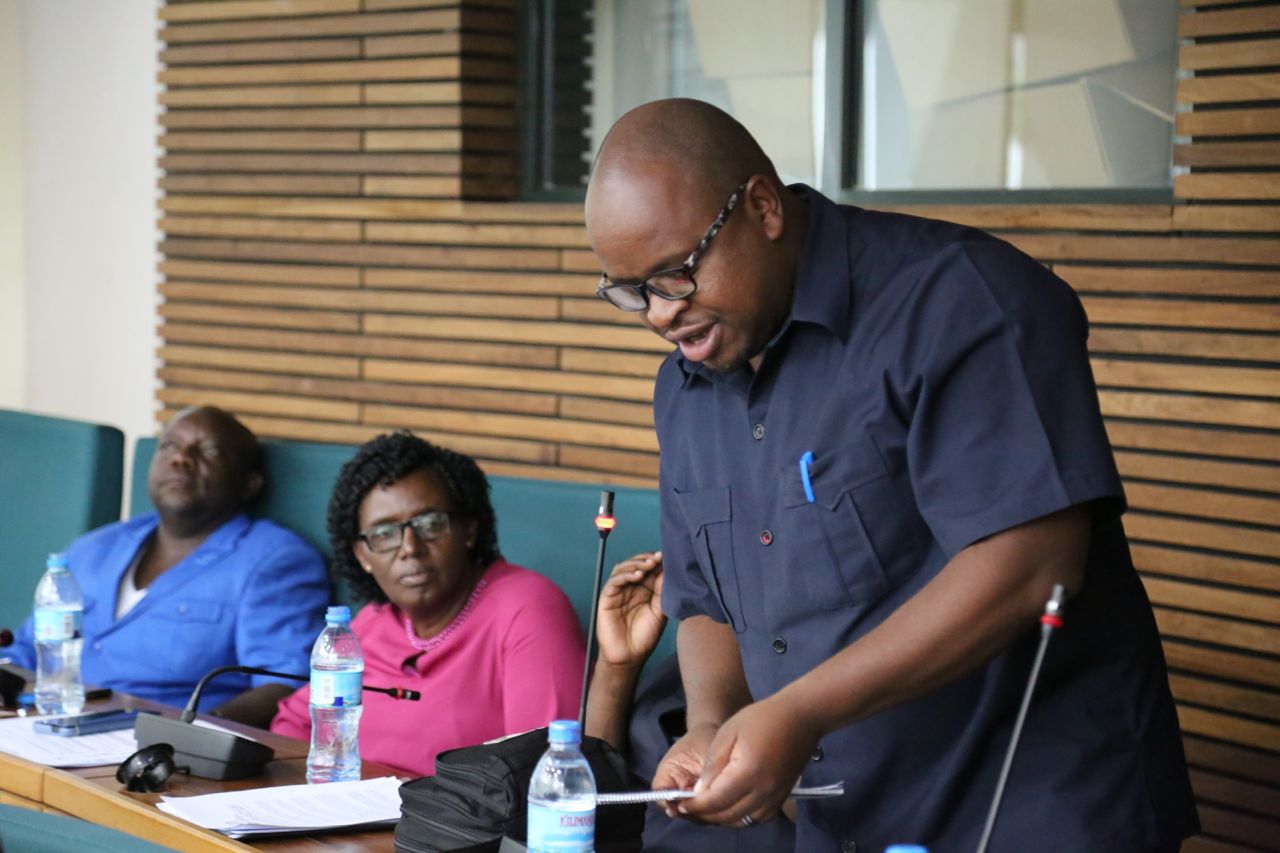 East African Legislative Assembly, Arusha, February 26th 2020: A report of the Assembly has once again lamented over the declining and slow pace of remittances at the Community. Coupled with this aspect, the Report of the Committee on Accounts on the audited accounts of the EAC for the Financial Year ended 30th June 2018, that was adopted yesterday, calls for the speedy conclusion of the Alternative Sustainable Financing mechanism on the one side and the improvement of systems, effective and efficient operations as provided for in the financial rules and regulations of the Community.

Chair of the Committee on Accounts, Hon Dr Ngwaru Maghembe, last week (February 18th, 2020) told an attentive House that the EAC Institutions, Projects and Programmes continue to face challenges of low absorption due to delayed or non-remittance of funds. According to the Chair of the Committee, the Community in the year under report, had a budget of USD 115,098,773; while the actual expenditure was USD 66,918,844 hence an overall performance of 58%. Hon Dr Maghembe however informed the House the accounts of the Community presented a fair position in all material aspects for the EAC Organs and institutions for the financial year in question, against corresponding financial and cashflows deemed in accordance with the international public sector accounting standards.

The report read variously by the Chairperson of the Committee, Hon Dr Ngwaru Maghembe and Members, Hon Jean Barimuyabo and Hon Kennedy Kalonzo, terms it vital for the Assembly to put in place an EAC Single Projects Coordination Unit, to ensure proper managing of the growing EAC projects. Coupled with that, the report calls for the Community to institute an annual forum involving all Institutions, Organs and the Council of Ministers to appraise and evaluate itself on the performance of its programmes and activities.

Hon Barimuyabo informed the House that the status of implementation of the previous audit recommendations was unsatisfactory and said there was need to reverse the trend.

During the Financial year period ended 30th June 2018, a total of 201 recommendations relating to the 11 Organs and Institutions audited by the Audit Commission, were noted as outstanding. From the assessment of these recommendations, the Committee noted that 73(36%) of these were fully implemented. 74 (37%) were under implementation; 48 (24%) were not implemented while 6 (3%) were overtaken by events.

The Community is also reeling from understaffing with a total of 54% of all envisaged positions in the staffing component across all Organs and Institutions yet to be filled.

The Assembly recommends to the EAC to fast track and put in place measures for the operationalization and harmonization of all national and regional policies, regulations and laws in order to expedite the full realization of the pillars of EAC integration.

The report notes some concerns and requests the same to be speedily addressed. Of great concern to the Assembly, is the slow implementation of the previous audit recommendations; non-provision of quarterly reports to the Assembly as recommended in previous reports; delayed recruitment and filling of vacant positions which remain a persistent challenge.

On the status of assent of EAC Bills, the Assembly urged its Commission (EALA Commission) to ensure follow-up on the matter with the Council of Ministers to ensure assent is done in a timely manner and fashion. As at 30th June, 2018, EALA had 27 Bills that date back to 2012, that were still pending assent of the Heads of State. According to Hon Barimuyabo, 17 Bills were yet to be assented to by any Partner State, while 3 Bills had been assented to by 3 of the 5 Partner States. Another 3 Bills had received assent from two out of the five Partner States.

Another concern of the Committee, the Assembly avers, concerns the gross irregularities noted in the recruitment procedures and award of short-term contracts, that contravene the EAC Staff Rules and Regulations. Equally, the report urges the Assembly to ensure procurement processes at the Community are strengthened.

Debate yesterday, ensued and was presided over by Hon Leontine Nzeyimana, elected Feb 24th, 2020 as temporary Speaker to oversee business of the House in absence of the substantive Speaker, Rt Hon Ngoga Karoli Martin. At debate time, Hon Abdikadir Aden, said the staffing position of the Assembly was urgent and that Council of Ministers needs to pronounce itself over the matter. He further termed as urgent the need for Council of Ministers to look at the welfare of staff. “The last time, there was a staff emolument increment, was in 2006 and this is unacceptable”, he remarked. He further remarked that a benchmarking study taken on the Daily Subsistence Allowances (DSA) showed the EALA did not compare favourably and this was taking a negative trend.

The Member lamented that some ‘Committees’ formed to assist the Council of Ministers, such as the Adhoc Commission and the Finance and Administration Committee, did not exist in the Treaty as is presently constituted. The Adhoc Commission has taken over activities of recruitment which would otherwise be superintended over by the right department at the EAC Secretariat. “It has made the Human Resources Department redundant”, he said. “The Adhoc Commission together with the Finance and Administration Committee are not in the Budget Act or the Treaty and the Council of Ministers has delegated too much”, he added.

Hon Gideon Gatpan said there was more need for transparency and accountability as provided for by the staff rules and regulations. The legislator called for results-oriented performance to ensure output, saying there were a number of recurring matters in the report. On his part, Hon George Odongo said there were 17 bills that were yet to be assented to, while, some others were at various stages in the integration process. “It is important that Council of Ministers complies and that the bills not assented to, are returned with the specific reasons so the Assembly may address the same”, he said. “At the same time, there is need for the EALA to communicate effectively with the Clerks of the respective National Assembles in order to ensure receipt of the bills and that the respective committees are acting on the same”, the legislator stated.   Hon Victor Barimuyabo on his part, had sought to know why the East African Development Bank (EADB) should not be audited like other institute of the EAC.

The Chair of the Council of Ministers, Hon Olivier Nduhungirehe welcomed the report stating that a decision on the new structure of the EAC Organs and Institutions had been adopted and EAC Secretariat directed was directed to implement. The Minister assured the House of co-operation with all stakeholders to address existing challenges. On Assent of Bills, the Council said it would look in to the matter of the delay in return of Bills that are not assented to. “The Council of Ministers shall make the necessary follow-ups”, he said. The Minister said, the issue of remittances should be clearly looked at and the critical matter of sustainable financing mechanisms concluded.