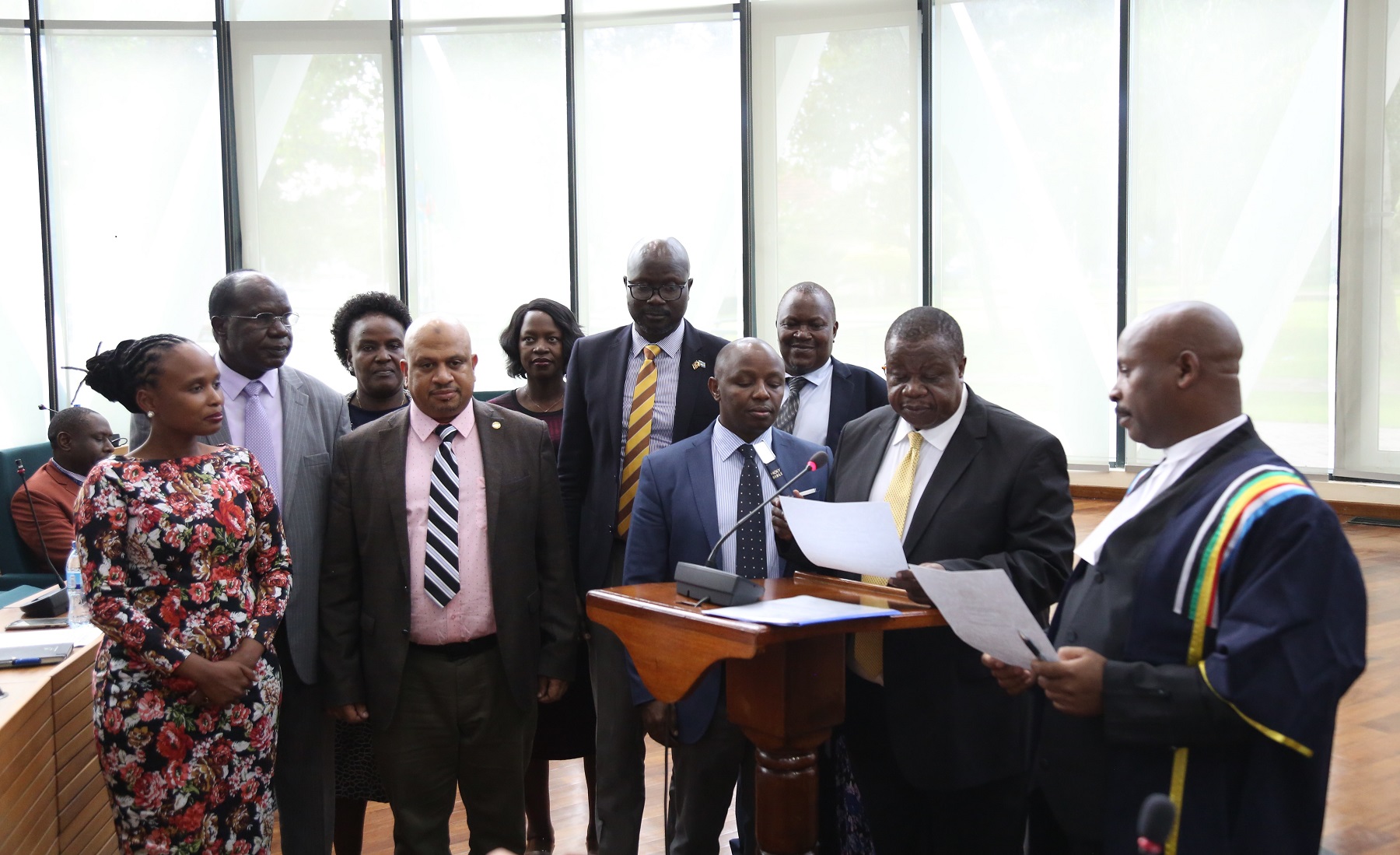 Hon Otafiire was sworn in by the Clerk to the Assembly at a brief ceremony witnessed by the Speaker and Members of EALA in line with the Rule 5 of the Rules and Procedures of the Assembly. The Rule says in part that: “No Member can sit or participate in the proceedings of the House until the Oath or Affirmation of Allegiance to the Treaty is taken”.

Rule 5(5) specifically states that “when a Member first attends to take his or her seat other than at the first Sitting of a new House, he or she shall be brought to the table by two Members and presented by them to the Speaker who shall then administer the Oath or Affirmation of Allegiance”.

Hon Leontine Nzeyimana, who was elected to preside over the House in absence of the substantive EALA Speaker, Rt Hon Ngoga Karoli Martin, congratulated Hon Otafiire upon his swearing in – as he assumes his ex-officio role in the regional August House.

Hon Gen Otafiire was appointed to the Ministry by H.E. Yoweri Kaguta Museveni, in December 2019, replacing 2nd Deputy Prime Minister, Rt Hon Dr Ali Kirunda Kivenjija who moved to Office of the President. The newly appointed Minister has held several government portfolios including the ministerial docket at the Constitutional and Legal Affairs Ministry. Maj Gen (Rtd) Otafiire who is a former Member of Parliament for Ruhinda County, is deputized in the EAC ministry by Hon Wandera Julius Maganda.

Prior to that, the EAC Minister served as a Minister of State for Internal Affairs (1986-88). He also served as the Director General of the External Security Organization (1992-1994), before becoming a delegate to the Constituent Assembly, that drafted the 1995 Constitution of the Republic of Uganda.

Hon Gen Otafire, who is a retired military officer (Major General) and politician, holds a Bachelor of Social Science from the University of Makerere University and a certificate in French language.

In his maiden statement on the floor, Hon Otafire assured the House of his commitment to ensure integration is realized. “I promise to work hard to strengthen EAC integration to ensure the dreams of our forefathers become a reality”, Hon Maj Gen Otafiire stated.

Chairperson of the EALA Chapter, Republic of Uganda, Hon George Odongo, hailed Hon Otafiire as an experienced and visionary leader. “This House is lucky at this point in time to have a person of Hon Otafiire’s caliber, a passionate leader and Pan Africanist who does not believe in borders”, he said.