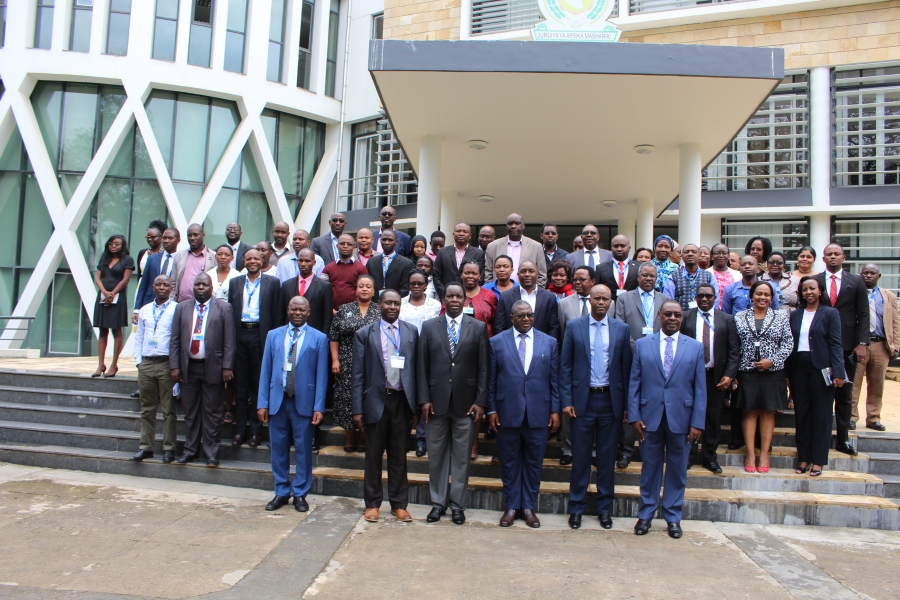 East African Community Headquarters, Arusha, Tanzania, 27th January, 2020: East African Community Partner States are in the process of harmonizing critical policies and putting in place the requisite institutions to attain a single currency for the region by 2024 as outlined in the EAC Monetary Union Protocol.

EAC Secretary General Amb. Liberat Mfumukeko said that the Bill for the establishment of the East African Monetary Institute (EAMI) had already been assented to by the Summit of Heads of State, adding that the EAMI would later be transformed into the East African Central Bank that would issue the single currency.

“The establishment of this institute will help to provide impetus towards the formation of the East African Monetary Union, which is the third pillar of our integration,” said Amb. Mfumukeko.

Amb. Mfumukeko disclosed that the Council of Ministers had approved the EAC Domestic Tax Harmonization Policy, adding that proper implementation of the policy would reduce tax competition thereby enhancing cross-border trade and investment in the region.

On the Financial Sector, the SG said that the Community had developed requisite legal instruments (Bills) for the insurance and microfinance sub-sector and strategies for implementation of financial education and insurance certification.

“Further, we implemented the financial market infrastructure for payment and settlement systems as well as finalized regional regulations for portability of pension benefits and consumer protection,” he added.

Amb. Mfumukeko was giving his New Year’s Address to the Staff of EAC Organs and Institutions spread across East Africa from the EAC Headquarters in Arusha, Tanzania.

He said that Community would have in place an EAC Investment Helpdesk and a Buyer-Seller Online Platform by June 2020.

“Both facilities will increase intra-EAC trade by creating awareness and markets for products manufactured within the EAC region.”

The Community, with US$20 million support spread over five years the World Bank, had also operationalised an EAC Statistics Development and Harmonization Regional Project.

“The project will support production of quality and harmonized statistics in the region through capacity building in the National Statistical Offices of the Partner States and the EAC Secretariat as well as support the establishment of the EAC Bureau of Statistics,” said Amb. Mfumukeko.

On the East African Court of Justice, the SG disclosed that sub-registries opened in the Partner States’ capital cities had elevated the visibility of the Court and reduced the costs of litigation and access to justice to the citizens of the Community.

“The residents can now easily take advantage of the Court and have their disputes resolved. In addition, the finalization of the review of the EACJ Rules of Procedure in 2019 will now provide seamless procedures to the benefit of the litigants,” said Amb. Mfumukeko.

On fisheries, the SG revealed that the Lake Victoria Fisheries Organization (LVFO) updated the status of fish stocks on the lake registering a 21% increase in total biomass to 2.68 million metric tonnes between 2018 and 2019.

“The Nile Perch population increased by 48%, from 0.55 million to 0.82 million metric tonnes over the same period. LVFO also revised Co-Management Guidelines for Lake Victoria, which provide for enhanced participation of stakeholders in fisheries management as well as capacity of fish traders and inspectors to promote market access, improved revenue collection and enhanced fish quality and safety assurance.”

LVFO received funds from the EU for a Start-up Phase of ECOFISH Project to enable consultations with key stakeholders to facilitate development of the detailed programme for enhancing regional policies and institutional frameworks.

The SG urged all EAC Staff to rededicate themselves to serving the region, a task he described as a privilege, adding that they had been recruited competitively based on their unique skills and expertise.